​Some insights about the Philippine Stock Market

​How is the Philippine Stock exchange (PSE) performing? Before answering this question, it is important to talk a little while about the history of this Asian’s country stock market. First, it is significant to underline that this last it is one of the oldest stock exchanges on the continent, it was founded in 1992 from the merger of Manila Borsa (MSE), established in 1927, and Makati Borsa (MKSE), established in 1963. Until 2001 PSE was a non-profit organization, and after that, it became a stock corporation ahead of a listing from the following year. From that moment on the president and the Board of Directors began to play a fundamental role; the current president is Rodrigo Duterte, elected in 2016.

Despite its important origins, nowadays the Philippine Stock market is underperforming; the average daily value turnover at the beginning of September was $119 million, an extremely low amount. Looking at details it is visible how different is the performance of the Philippines compared to its neighbors. In particular, a divergence is notable by observing the number of companies attracted in 2020 by the different Asian countries. The country has 271 publicly traded companies, one of the smallest numbers in the region, with an increase of only 15 new companies in one year.  Considering the other stock exchanges, the Indonesian Stock Exchange, the Bursa Malaysia and the Thailand Stock Exchange have added 37, 13, and 9 new companies to their listings, respectively. As it is known, Vietnam is a very poor nation, with a modest economy, smaller than the Philippines’ one, however, with its two stock exchanges it has increased the total number of listings by 11.

Nevertheless, there is also some good news that concern the previous month, on the 26th of October Converge ICT Solutions, with the second Philippines’ largest IPO of the year, raised almost 29bn pesos (about $600 Million). Convergence is a fiber internet and digital-centric services provider, it is leading in the country since the boom during the Covid-19 pandemic and its offer size is the biggest in the country for many years. However, Convergence's IPO is only the third of this year (after Merry Mart Consumer and AREIT), which is pretty bad and has caused concern about the country’s current economic condition. 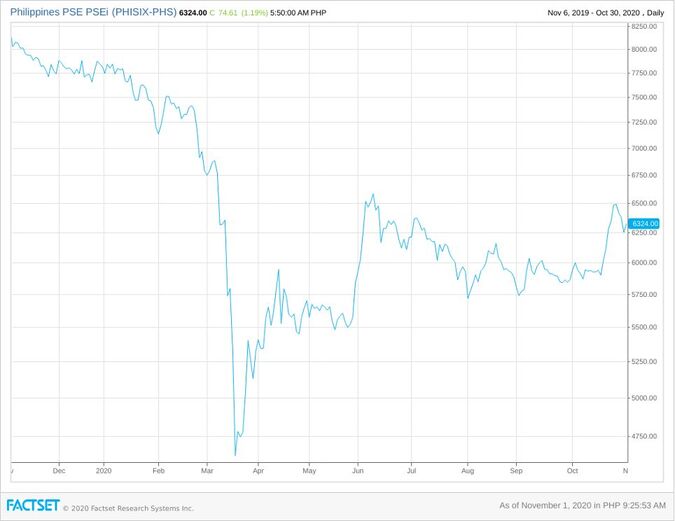 Source: Factset
​This is only one of the several reasons why the PSE has decided to implement some measures to catch up. One of the main ideas is to modify the listing rules: the president would like to give special attention to small companies. It is trivial to say that the growth of those firms has been challenged by the pandemic, this is why the country is looking to raise funds for recovery. There are many other proposals, one of those concerns the possibility of the waiver of the market capitalization requirement for the mainboard, and the positive EBITDA requirement for the secondary board. Moreover, the demand for the three-year operating history might be reduced to two.
Also, there is a very important suggestion to help very small firms, or even start-ups, which have demonstrated potential but cannot satisfy the prerequisites necessary to go public. The proposal regards the opportunity for these companies to become public through the help of a sponsor.

All the measures proposed should revitalize the economy, elevate PSE’s position and increase the trading liquidity. It is crucial to underline that the proposed solutions are not new, they have already been put into practice in other territories of the continent, showing very hopeful results. Ramon Monzon, chief executive of the stock exchange, is confident that the previously mentioned changes will work considerably also in the Philippines' market.

These moves are going to be extraordinarily important for start-ups, especially for the tech one. Being a small business was already particularly difficult before the current situation, now with the worldwide crisis due to the economic consequences of the Coronavirus is even harder. However, as a venture capital investor has underlined, also the possible negative consequences should be considered. Even if these rules' adjustments are promising, in particular the removal of the high market capitalization, it is important not to forget some risks related to the fact that rules are largely tailored for big and efficient companies. Unfortunately, start-ups might still not have a place in the local stock exchange: to develop and enter the market, a large amount of time and money are required but success is not always guaranteed.

In conclusion, it is necessary to say that even if many Philippines companies are not finding a reason for an IPO, since they are already profitable and for private firms is preferable to remain in a low profile, the fact that PSE is trying to find some solutions is a very significant signal and step toward better performance in the coming years.