The oldest Stock Exchange in the world was founded in Amsterdam in 1602, followed by the Paris Stock Exchange in 1724 and the Brussels Stock Exchange in 1801. Since then, Stock Exchanges have changed frequently partners, as dancers in a waltz, through mergers and acquisitions, exploiting synergies and rising market shares and often arising concerns about the potential pitfalls – in terms of efficiency – of industry’s concentration. Moving forward to recent times, Euronext was founded on 22 September 2000, trough the merger of Amsterdam, Paris and Brussels exchanges, a strategic move that aimed at taking advantages of the European Union’s single currency and the harmonization of financial markets. Euronext became an individual listed company in 2001 and since then, it has grown by developing additional services and acquiring other exchanges. In 2007, Euronext merged with the New York Stock Exchange (NYSE), forming NYSE Euronext. The headquarter of the new firm was in New York City, and their European operations were located in Paris. The marriage lasted 7 years, when Euronext became once again a standalone company. FastMatch, a trading platform, was then acquired in 2017, the Irish Stock Exchange in 2018 and Oslo Stock Exchange in 2019. Euronext announced in October 2020 that it plans to acquire Borsa Italiana Group from the London Stock Exchange Group (LSEG), enhancing its dominant presence in Europe. 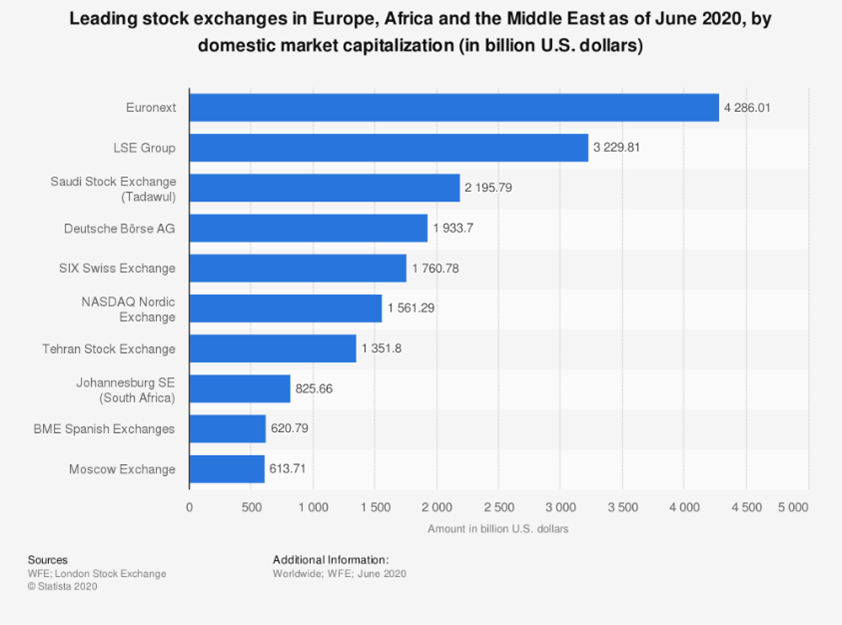 ​Overview of the Stock Market

A stock market is similar to an auction: it enables buyers and sellers to mediate and trade. It facilitates regular activities of buying, selling, and issuance of shares of public companies. One of the most important aspects of a stock market is to guarantee fair pricing and full transparency in all transactions. A stock market can act either as a primary or as a secondary market.
On the primary market, companies can issue and sell shares for the very first time through an initial public offering, also called an IPO. These are sold to the common public, and companies can raise additional capital.
As a secondary market, the stock exchange acts as a normal trading platform: buying and selling of already-listed companies are facilitated. Usually, the supply and demand set the price for the securities (the levels at which investors and traders are willing to buy/sell). The “bid” is offered by the buyer, and it represents the highest amount they’re willing to pay. On the other hand, the “ask” is demanded by the seller, and it is usually higher than the “bid”. The difference between the two prices represents the “bid-ask spread”. Nowadays, almost all major stock exchanges operate electronically.
THE DEAL
Players involved 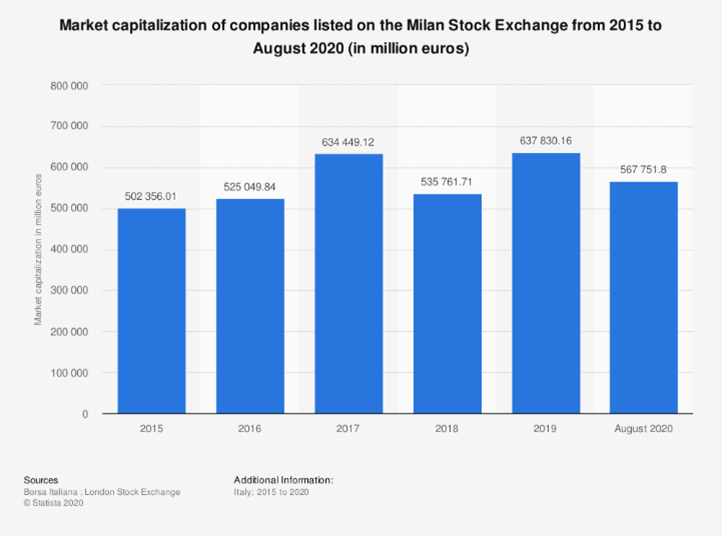 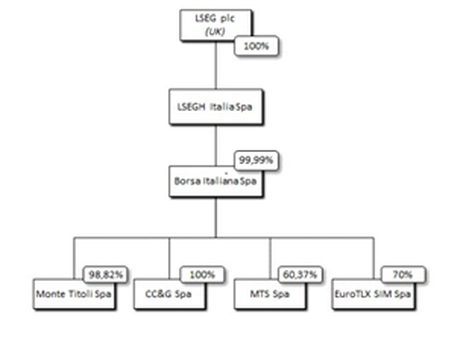 Overview of the deal

On August 18, the first rumors around a potential acquisition of Borsa Italiana were spreading. Euronext, Deutsche Börse, Swiss Stock Exchange and Nasdaq were the possible players involved in the transaction, but on October 9, Euronext and Cassa Depositi e Prestiti signed a binding agreement with London Stock Exchange Group to acquire London Stock Exchange Holding (Italy), which owns Borsa Italiana and MTS. The deal includes a €4.325bn offer, all cash. In order to raise the required amount, Euronext will employ €300mln of cash and issue €1.8bn of new debt and €2.4bn in equity, which will include €700mln provided by CDP (7.3% stake) and Intesa Sanpaolo (1.3% stake).

Considering EBITDA of Borsa Italiana in the last twelve months (€278mln LTM June 2020), the offer implies a multiple of 15.6x EV/EBITDA (before synergies). The completion of the deal is expected in the first half of 2021. JP Morgan and Mediobanca assisted Euronext, while Goldman Sachs, Morgan Stanley, Barclays and Robey Warshaw advised LSEG.

Looking at comparable transactions which occurred between major stock exchanges in the last fifteen years, the deal implies a higher multiple than the average, but can be justified by the potential advantages that Euronext can derive from the acquisition, in particular synergies and consolidation of the presence in the European market. Borsa Italiana and MTS were acquired in 2007 by London Stock Exchange for €1.6bn, which underlines the high price required.

The graph below, created with the help of Factset, presents the price for London Stock Exchange Group (green) and Euronext (blue) in the time frame of the transaction. The first line corresponds to the rumors, the second one to the announcement of a partnership between Euronext, CDP and Intesa Sanpaolo to acquire Borsa Italiana and the third one to the acceptance by LSEG. The market is substantially subject to the high volatility related to the Coronavirus pandemic, and Euronext stock prices declined in the days after the offer possibly due to the high price required (-4,4% on October 9). LSEG stocks on the other hand rose (+0,4% on the same date), mainly because the transaction is going to ease the acquisition of Refinitiv. 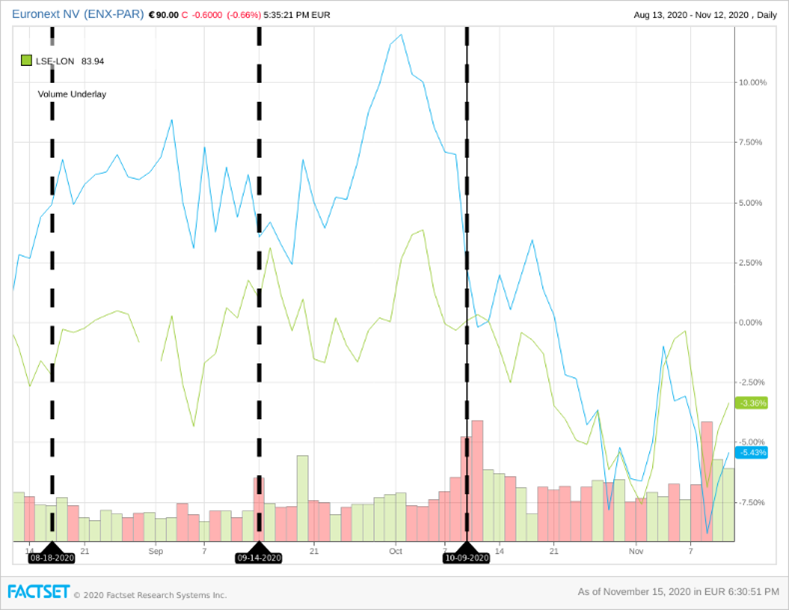 The proposed Refinitiv takeover by LSEG was one of the main short-term rationales behind the Euronext-LSEG deal, being the divestment of Borsa Italiana likely to respond to EU’s competition concerns over LSEG: looking at the Vendor side, the sale is expected to have a positive impact on the EU Commission’s review’s outcome - expected in mid-December 2020 - therefore facilitating the deal closing with the global provider of financial data and infrastructure.

According to what declared by Euronext itself, the “Combination” would give shape to the leading pan-European market infrastructure, with Euronext strengthening its position in European cash equities while sharpening capabilities in fixed income trading and post-trading activities.
The transaction, while contributing to the building of the backbone of the Capital Markets Union in Europe, would also re-shape Italy’s role in the financial ecosystem: accounting for almost 35% of Euronext’s revenues, Borsa Italiana would play a key role in the future strategies and governance of the Group, contributing to its revenue’s mix diversification.  The cruciality of Italy in the new environment is recognized by both Stephane Boujnah, Euronext’s CEO, and Fabrizio Palermo, CDP’s CEO, with this latter declaring to be proud of Cassa Depositi e Prestiti contributing to bring Piazza Affari in an important pan-European group.

Based on a price for ordinary share of €102.50, the deal is expected to be immediately accretive to Euronext’s adjusted EPS before synergies, and would deliver – as the most important consequence on the long-run– pre-tax run-rate synergies of €60 million per annum by year 3, available to Euronext after a €100mln restructuring cost.
While €45 million of future synergies are expected to be cost synergies, primarily due to the migration of Borsa Italiana’s cash equity and derivatives markets to Euronext’s trading platform Optiq and to the technology synergies from co-operation of CSD businesses, the remaining 15% of total synergies would be revenue synergies, mainly driven by the development of offerings in derivatives products, product cross-selling and growth opportunities,as the ones delivered by the development of corporate services in Italy.

To conclude, it is worthy highlighting – as analysed in recent papers – that profitability of merging exchanges in the post-deal period is mainly due to the above-mentioned cost and revenues’ synergies, and not to the increased industry’s concentration levels: in other words, there is no evidence that increasing concentration could eventually lead to the exercise of market power by the players involved, and therefore…let the waltz continue!