In this decade, we have witnessed an incredible increase in consolidation among global financial markets infrastructure. Low market volatility and fierce competition in equities trading combined with ever decreasing fees earned by stock markets have pushed the players in the market towards consolidating with one another aiming to cut costs by increasing their scale. The squeeze of exchanges’ profitability, has pushed them to look for new areas in which to develop and prosper. A glaring example is the acquisition of Refitiv, an important data company, by the London Stock Exchange which will most likely position the exchange as one of the world’s biggest supplier of market data and infrastructure. The financial markets infrastructure industry has become scale and diversification dependent. It is increasingly difficult for exchanges to maintain profitability while existing on their own. Bolsas y Mercados Esponels (BME), which is the owner and operator of the Spanish stock exchange, doesn’t seem to have what it takes anymore to remain a purely independent player as shown by its declining annual revenues which have shrunk by about €50m over the course of the past five years. The Spanish company has tried to stick to the more traditional business of equities trading without great success.

The increase in the share price of BME can be traced back to the official offer that has been presented by SIX on Monday. The Swiss exchange has offered a price of €34 per share, valuing the company at €2.8 bn. Since SIX is a private company the acquisition would have to be paid entirely with cash. That would not be a problem for the Swiss exchange as it has accumulated cash for approximately €3,46 bn and it can count on the backing of important Swiss banks such as Credit Suisse. The €2.8 bn valuation would imply an Enterprise-EBITDA forward multiple of nearly 15 times for BME, this is a record valuation if we think that Euronext – that in the last five years has definitively over performed BME – has been valued at 14 times the same multiple. The Swiss stock exchange is willing to pay such a high price for the acquisition of BME because it would allow it to have a main hub within the Europe Union and the possibility to build a derivative business. To further convince the shareholders of BME and the Spanish Government – that is bound to play a crucial role in this acquisition – SIX has offered to maintain some of BME’s independence. The possibility to retain national identity might be a decisive detail in convincing the Spanish Government of the goodness of the deal. 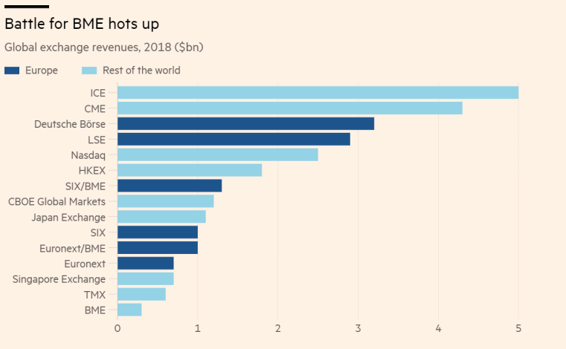 This could mean that the company which fails to secure a deal with BME might find itself in a few years to be the next takeover target. A scenario that both the top management at SIX and at Euronext would do anything to avoid.