On April 29, 2018, T-Mobile and Sprint, respectively third and fourth-biggest US wireless carriers, announced an agreement to merge, creating a giant nearly as large as AT&T or Verizon Wireless. Under the terms of the deal, the merged company will be led by John Legere, current T-Mobile CEO and take the T-Mobile name, and will have more than 127m wireless subscribers in the country. In addition, Sprint chief Marcelo Claure alongside Masayoshi Son, the CEO of Sprint's parent company SoftBank, will have a seat on the board of directors of the combined group, which will have headquarters both in Kansas City and Bellevue, Washington.
The all-stock deal valued Sprint at $59bn, including debt, while T-Mobile was valued at $87bn, including debt. T-Mobile owner Deutsche Telekom would own 42 percent of the company, and Sprint owner SoftBank would own 27 percent. The remaining 31 percent will be held by the public, the companies' announcement said. 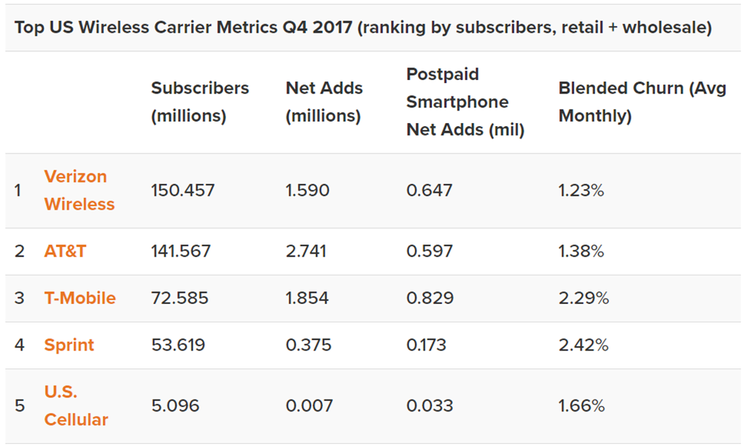 Source: Strategy Analytics, 2018, based on carrier reports
The road to the closing of the deal hasn’t been a straight one. In fact, the two companies held talks on a possible merger several times in the past years. A merger attempt was abandoned in 2014 when it became clear that Obama administration regulators wouldn't allow it, with the explanation that any deal that would take the number of major wireless carriers in the country from four to three would face fierce opposition. Similarly, the two companies attempted a second deal last year, but negotiations stopped since the two parts could not come to an agreement for the valuation of Sprint and the governance of the company.

What about the rationale of the deal?

If you ask the two companies, it's all about 5G. Carriers in the US are expected to spend billions of dollars to upgrade their networks for the 5G, the upcoming wireless standard, which is expected to start spreading in 2019. For what concerns this technology, T-Mobile said it would invest $40bn in its business and on its 5G network expansion in the first three years after the deal is completed. Whereas, since 2015, Sprint has accumulated more than $30bn of debt, mainly due to the investments in its wireless network.
The merger will create a strong player with the possibility to exploit economies of scale and deliver more for consumers and businesses, in the form of lower prices, higher innovation, and a leading wireless network. What’s more is that the merged company would be able to achieve all these things much faster than either company could on its own, as T-Mobile CEO Legere said. In addition to varying coverage maps, the two carriers cover wireless spectrum that only sometimes overlap. For this reason, the merged network would end up having higher coverage and stronger capabilities. In fact, Sprint has the 800MHz and 2.5GHz bands, for example, while T-Mobile has the 600MHz and 700MHz. T-Mobile quantified possible cost savings of $6bn as part of the merger. Whereas, for what concerns revenues, the companies estimated total revenues between $75bn and $76bn in 2018, with the aim of growing up to $86bn over the next three to four years.

Will the deal pass through antitrust authorities?

If regulators clear the deal, it should close approximately in the first half of 2019. However, that's a big "if." Not only there’s evidence of blocked deals in the past due to the possible reduction in the number of wireless carriers, but also consumer advocates have already started questioning the merger, claiming that this drastic reduction in competition is likely to harm competition and increase costs for consumers.
T-Mobile and Sprint will bring as support to the regularity of the merger the fact that competition in the wireless network has broadened beyond the two companies and its two larger rivals, naming both Comcast and Charter Communications in its announcement. Both US cable providers, in fact, started collaborations with Verizon, which allow them to provide wireless services to consumers using the network of the mentioned wireless carrier. “This isn’t a case of going from four to three wireless companies - there are now at least seven or eight big competitors in this converging market,” Mr Legere said. In addition to reduced competition concerns, regulators will want to have a proof that the combined entity won't promptly cut thousands of jobs in the name of eliminating overhead.  T-Mobile and Sprint have declared that the merged company will actually produce more jobs, but this is a statement which is often claimed but rarely met.