Telemedicine is a modern industry, that through the use of technological advancements and platforms, is focused on improving the quality of health services, by constantly monitoring its patients, while reducing the pressure on health professionals and also the costs covered by the US health care system.
The market received an important boost since the starting of the pandemic, in fact telemedicine has become the safer channel to communicate with patients, as confirmed by the WHO.
The industry is growing really fast, as in 2019 its estimated market size was more than $45B and it’s expected to experience a 19.3% CAGR between 2020 and 2026, that will lead to a market value of at least $175B. However, at the moment, it’s not profitable: between 2017 and 2019 Teladoc lost $130M and Livongo $29M.

If on one side telemedicine is helping in reducing hospitalization rates, on the other it’s experiencing some issues, such as: the resistance of patient to accept the use of technology, the high costs of implementation and data privacy and safety issues. Another major problem is the possibility that the growth will slow down, once the pandemic is over.
The industry classifies its services in 3 categories, which are: monitoring, consulting and academic applications of telemedicine, with tele-monitoring that holds the largest revenue share.
The global market is currently dominated by North America and Europe, where is expected a similar trend in the following years, due to rising telemedicine awareness and technology acceptance. The constant development of telecommunication systems and the increasing demand for healthcare assistance is favoring the growth of the industry also in the developing regions of Asia Pacific, Middle East and Africa.

On October 29, less than three months after its announcement in August, Teladoc and Livongo finalized an $18.5B merger, which sees Livongo as a new subsidiary of Teladoc. The deal was largely approved; with more than 99% of the shareholders of both parts in favor. The combined company will be under the control of Teladoc shareholders by 58%, with the remaining 42% in the hands of Livongo shareholders, who will receive, per every share they currently own: 0.59 shares of Teladoc and $11.33 in cash, including an extra dividend of $7.09.

Launched in 2002 in Dallas, Texas, by G. Byron Brooks and Michael Gorton, Teladoc Health is the first and largest telemedicine and virtual healthcare company based in the US. Teladoc connects its customers with a net of physicians and health professionals through the use of telephone, videoconferences and mobile apps. Its services are mainly divided into 6 categories, which are: platform and program services, guidance and support, expert medical services, mental health services, telehealth and integrated virtual care. Teladoc’s physicians treat non-emergencies, episodic needs but also complicated medical conditions. The company generates revenue through yearly or monthly fees charged to its customers, but also through occasional consulting.

Teladoc has more or less 3,100 licensed physicians and nurses, its services are available in 30 languages and in 2019 the company was active in more than 175 countries and served 27M members.   The company’s strategy focuses on aggressively acquiring its competitors or related services, in order to expand in different health segments; in fact, between their biggest acquisitions, we have: BetterHelp in 2015, Best Doctors in 2017 and Advance Medical in 2018.
Teladoc trades on the NYSE since July 1, 2015: its initial IPO valued the company at $19 per share (currently trading around $200), with a market capitalization of $758M and an overall enterprise value of $620M.

Livongo Health was founded in 2008, by Glen E. Tullman, with the mission of improving the lives of people with chronic disease. The purpose of the company is to guarantee a healthier life to those that are affected by chronic diseases, also reducing their costs, since such conditions require an expense of more than $500B per year by the US health care system. Livongo’s technologies allow the patients to be constantly monitored, while receiving personal alerts and reminders.  Originally, Livongo’s main focus was diabetes and then it expanded on hypertension, behavioral health and obesity. The company is growing faster and faster, thanks to important contracts and partnerships, such as the one with Amazon in order to install on Alexa the ability of giving health tips.

DEAL STRUCTURE TELADOC HEALTH-LIVONGO
Teladoc Health Inc acquired Livongo Health Inc for $14.3 billion in cash and stock. Under the terms of the transaction, Teladoc would pay $4.24 in cash and 0.5920 shares to each shareholder of Livongo ($158.99 offer price), representing a 10% premium to the closing price of Livongo on August 4, 2020 ($144.53 target price). In addition to the consideration, Livongo would pay its shareholders a special dividend of $7.09 in cash per share held for a total of $11.33 in cash plus shares valuing the deal at a total of $18.5 billion. 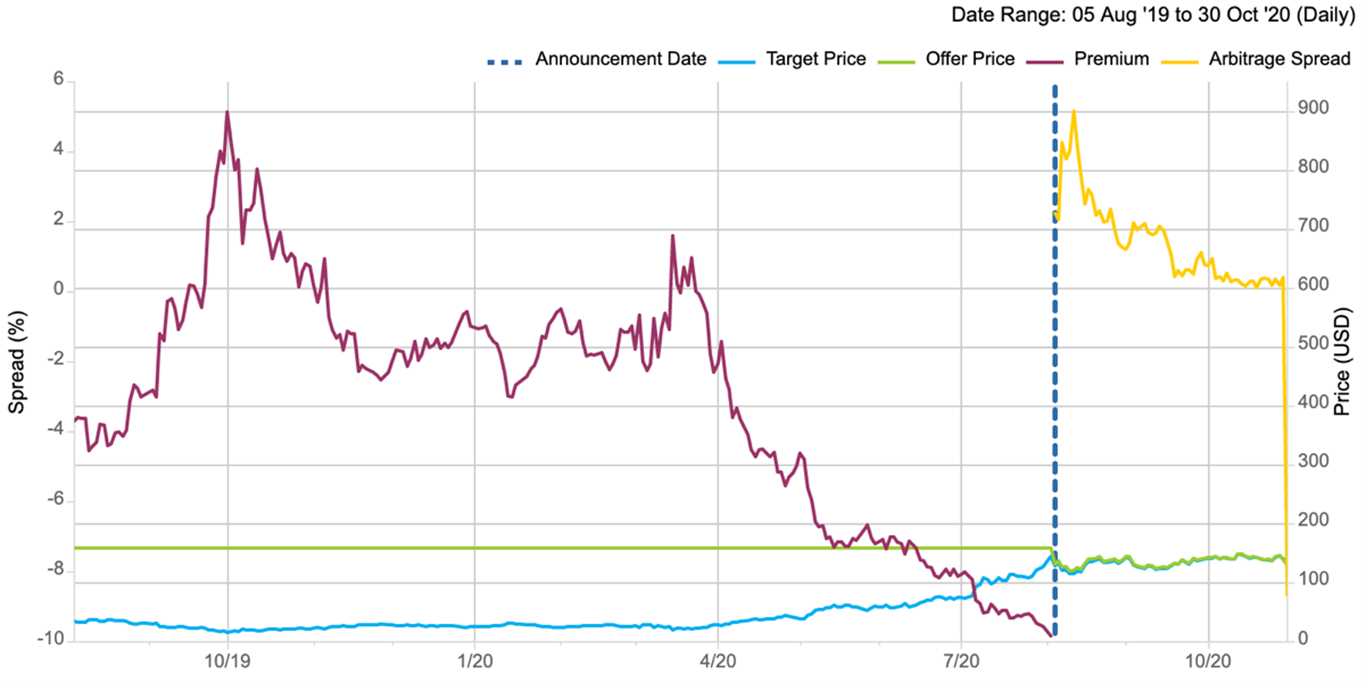 Source: FactSet
The transaction would expand Teladoc's client base. Following the acquisition, the shareholders of Teladoc and Livongo would own 58% and 42% respectively in the new combined entity. As part of the transaction, Jason Gorevic, current chief executive officer (CEO) of Teladoc, will lead the combined company and much of its senior leadership, including its chief financial officer (CFO) and chief operating officer (COO), will come from Teladoc. Four of Livongo's top executives will leave now that the deal is finalized, including CEO Zane Burke, President Jennifer Schneider, Chief Financial Officer Lee Shapiro and Steve Schwartz, senior vice president of business development. Former Livongo Chairman Glen Tullman will have a seat on the combined company's board of directors. The board of directors of both companies has approved the proposed transaction. The deal was subject to customary closing conditions and regulatory approvals, including shareholders approvals, court approvals and was originally expected to close on 2020 Q4. A complete virtual special meeting of stockholders would be held by the companies to approve the transaction. On September 9, 2020, it was announced that Federal Trade Commission approved the proposed transaction. On September 11, 2020, it was announced that board of directors of both companies unanimously recommended its shareholders to vote at their general meetings to be held on October 29, 2020. The applicable waiting period under the HSR Act with respect to the transaction expired on September 18, 2020. The completion of the deal remained subject to other customary closing conditions and continued to be expected to close in the fourth quarter of 2020. On October 16, 2020, Livongo conditionally set October 29, 2020, as the record date for the special dividend and would be paid on or around November 3, 2020 to its shareholders. On October 29, 2020, it was announced that shareholders of both Teladoc and Livongo have approved the transaction in their special meeting held.

STRATEGIC RATIONALE
The deal was friendly and had a strategic purpose. It was wrapped up quickly, in less than 3 months, as the companies likely look to leverage the current financial tailwinds of the telehealth boom and investor interest in digital health spurred by the COVID-19 pandemic. The combination of two of the largest publicly traded virtual care companies will create a health technology giant just as the demand for virtual care soars.
Both companies reported strong third-quarter financial results at the end of October. Teladoc's third-quarter revenue soared 109% to $289 million from $138 million during the same period a year ago. During the first nine months of 2020, revenue grew 79% to $711 million. Livongo reported third-quarter total revenue of $106 million, up 126% year over year from $47 million during the same period in 2019. The company expects to directly deliver more than 10 million virtual visits this year and has reported an additional 3 million enabled visits for its health system clients so far in 2020.

The deal involves two leading companies in the virtual care sector, both in a phase of strong dimensional expansion. According to Teladoc's projections, the combined company is expected to achieve revenues of $1.3 billion in 2020, which implies growth of 85% over last year, and growth of 30% to 40% for the next three years. Teladoc CEO Jason Gorevic stated that “the combination of these two companies was an inevitability” and it was “accelerated substantially” by the ongoing health crisis that has pushed virtual care to the forefront. He also said that it is better for the two companies to merge rather than competing.
It is clear that a deal of this size and growth prospects will have a major impact on the virtual care and health delivery industry. As a first step, several analysts expect that, within five years, all the services of the two companies will be accessible in a single portal, also through a mobile app. This new platform is expected to include not only Teladoc's virtual urgent care and behavioral health, but also Livongo's data science-driven chronic disease management solution.
This merger will most likely push competitors to find similar M&A solutions to remain competitive: we could therefore see a cycle of new mergers in the digital health solutions industry, as it will be very complicated for individual players to compete with the new Teladoc. As this deal represents a strong bet on the growth of the TeleHealth market and possible new acquisitions, several companies have recorded very positive performance on the stock market on the day the deal was announced, including DarioHealth, which recorded a 25% jump. According to its CEO Erez Raphael, this renewed confidence is due to the fact that investors are looking for new opportunities with public companies, and now that Livongo is out of the market competitors can benefit.

RISKS AND UNCERTAINITIES
Despite the potential of the merger, investors seem to have not liked Teladoc's decision on the purchase of Livongo with the above-mentioned details. The shares of the acquiring company lost more than 25% of their value in the week following the announcement of the deal, with -19% on the day of the announcement. Livongo also suffered significant losses on the stock exchange, recording -11% on the day of the announcement and -20% for the following week. The fact that the news of the deal was received by investors with such an unfavorable outcome indicates that there are potential risks behind the merger.
First of all, this is a deal that involves the merger of two unprofitable companies: both Teladoc and Livongo, although they are growing in size, are only reporting losses, with Teladoc alone posting accumulated losses of $310 million in the last three years. Although the industry is now booming, growth could fade, or at least stabilize, in the coming years, also considering the (expected) end of the COVID-19 pandemic.
Furthermore, there is the uncertainty that the price paid for the purchase of the target is unreasonably high. Investors seem to be wondering: why did the shareholders of Livongo, just when the company is growing at triple digits and the share has risen almost 500% in the first seven months of 2020, decide to sell it? One might suspect that, not seeing a profitable future for their company, Livongo's shareholders have decided to get out of it by maximizing their return.
Finally, given the new company's new board structure, with Livongo winning only five of the thirteen seats on the board and Teladoc retaining Chairman and CEO, it is fair to wonder how the two companies will manage to merge their human capital. In particular, there is concern that the two firms will not be able to integrate their salesforce, and this could be a major obstacle to the new company's business.

“Both Teladoc Health and Livongo were founded with the same mission: to create a new kind of healthcare experience, one that empowers people everywhere to live their healthiest life. Together, our team will achieve the full promise of whole-person virtual care, leveraging our combined applied analytics, expert guidance and connected technology to deliver, enable and empower better health outcomes.”
-Jason Gorevic, Chief executive officer of Teladoc Health