Tesla Commodities: The World Behind The EV Revolution

The electric vehicle revolution is leading the way to a golden age for battery raw materials, best reflected by a dramatic increase in price for the two key battery commodities, lithium and cobalt, over the last two years. However, the recent concerns regarding the future of the raw material supply availability for batteries and the impact of rising commodity prices on battery production costs have highlighted risks that may create divergent futures for these two commodities. ​ 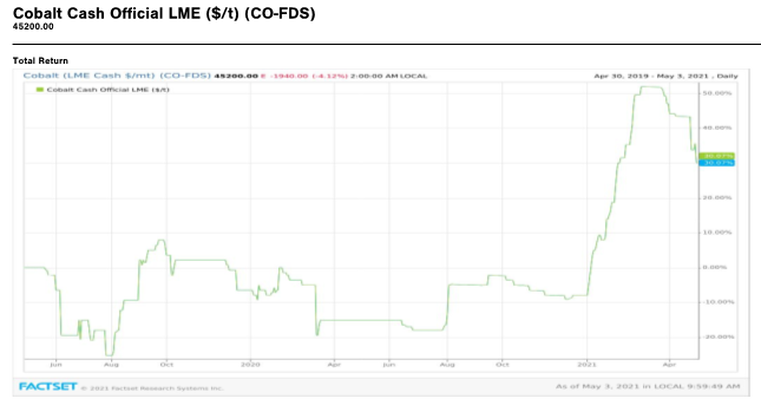 Both the lithium and cobalt markets have historically been driven by battery demand – primarily from consumer electronics – representing 40 percent and 25 percent of demand respectively. However, the growing adoption of EVs and the need for EV batteries with higher energy densities will see the demand for lithium increase more than threefold from 214 kt to 669 kt between 2017 and 2025, whereas cobalt will increase by 60 percent from 136 kt to 222 kt over the same period, assuming that Li-ion battery technologies will be the prevalent battery technology.
​
The actual underlying driver for both lithium and cobalt demand is the EV revolution, which is gathering pace. According to McKinsey, global EV production will increase from 3.2 million units in 2017 to 13 to 18 million units by 2025 ultimately reaching 26 to 36 million units in 2030 led by passenger vehicles but it’s reasonable to expect that also heavy vehicles will gain momentum in the following years.

Growth in EVs split by hybrid and pure electric 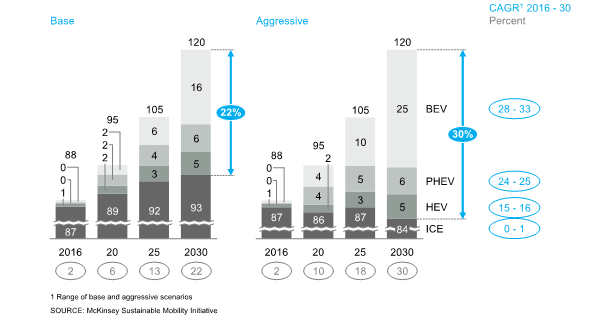 Raw materials used in the battery cathode such as lithium, manganese, nickel, and cobalt are becoming increasingly important in the total battery cost, as consequence the recent price spikes for lithium and cobalt have resulted in many battery producers, like Tesla, focusing on less cobalt-intensive chemistries. However, these commodities will still represent the main battery components for the following years.
​

Lithium and cobalt demand evolution split by batteries and other applications 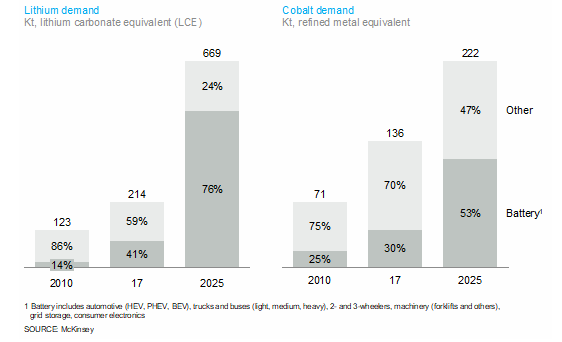 Another fundamental aspect we must include in our analysis is the supply-side dynamics, which are very different for lithium and cobalt and this will fundamentally impact the mid and long-term supply, demand, and pricing dynamics.
​
LITHIUM SUPPLY
The lithium market is oligopolistic: there are currently only eight producing countries of which three ( Chile, Australia, and China) accounted for 85 percent of global production. It is a very abundant mineral produced from either brine or hard rock source and it’s sold in two main forms: lithium carbonate, largely produced from brines, and lithium hydroxide, produced from hard rock sources and currently the preferred form for the longest-range EV batteries. Therefore, if we consider its natural abundance and announced mine expansion, especially in Australia, on one side, and a proportionate increase in converter capacity, we can conclude that the supply will be able to cope with the demand for batteries over the long run.

COBALT SUPPLY
The cobalt mine supply is currently quite fragmented from a producer perspective, with the top three players today accounting for just below 40 percent of global mine supply – Glencore (22%), DRC state miner Gecamines (9%), and China Molybdenum (7%). However, in contrast to lithium, cobalt mine supply is almost monopolistic in structure when looking at regional supply: the DRC alone accounted for almost 70 percent of globally mined cobalt output in 2017, with Russia, Cuba, Australia, and Canada – the next largest supply countries – accounting for just 13 percent of global supply.
In contrast to lithium, several key issues make an accurate determination of future mine supply uncertain:
We can conclude that, if we expect such aggressive demand growth in the EV sector, on one side we can assume a balanced market for lithium by 2025, where current producers see healthy profits and larger investments. On the other hand, cobalt, given its exposure in DRC and its dependency on copper and nickel markets and prices, will potentially continue to be highly volatile due to supply uncertainties and lack of transparency.