Tesla keeps up the surprise game for investors

The two weeks ending on March 3rd have been quite interesting and, at times, frustrating for Tesla investors. Lots of consecutive events affected Tesla’s stock and, if we look at the chart, it is evident that stock price has been volatile since the start of last week. Elon Musk (CEO of Tesla Inc.) has played quite a part in these events. This world-renowned businessman, who is just starting down the new history of the humans in space by sending the crew of Dragon spacecraft (Space-X project which was executed last Sunday), is evidently harming the company’s performance on stock market and scares off investors with his unexpected announcements. 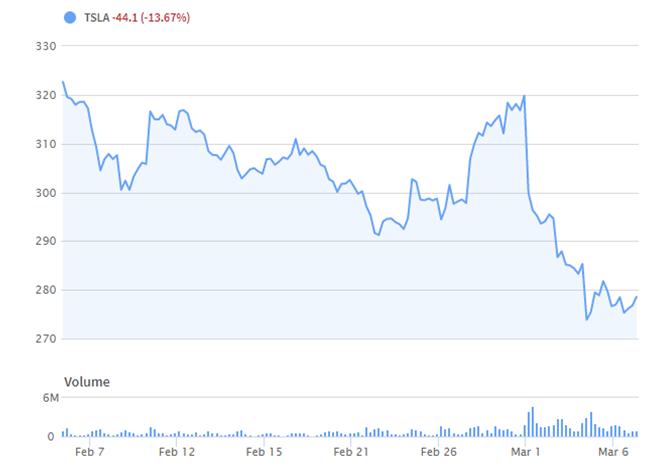 On Monday, U.S. SEC (Securities and Exchange Commission) was after the tweets Mr Musk published 6 days earlier, where he claimed that Tesla will make half a million electric vehicles this year. SEC claimed that he openly volatized the settlement reached in September that prevented him to communicate information about company’s material without company’s approval. This was the time when stock started to be relatively volatile and had a small downside that day.
On Tuesday, Musk again has used his beloved platform for thought spreading and posted a criticizing statement towards SEC saying: “something is broken with SEC oversight”. This could get him in additional fines, according to legal experts.
On Wednesday, Tesla stocks had a big growth following Musk’s tweets hinting at the upcoming announcements from Tesla, by changing his profile photo to a photo of Mars with a little alien on it.
On Thursday, Tesla announced its new Model 3, making it the cheaper and improved version of Model S and Model X. This increased Tesla’s stock price even higher, but the situation would very soon change due to Musk’s later announcement. The CEO told the reporters that Tesla will probably not make profits in first quarter, due to the costs of delivering cars to China and Europe. He predicted the profits for the second quarter, but this was not enough to prevent Tesla stock price from plummeting on Friday. On this day, shares dropped by 7.8 percent and made their biggest decline in a six-week time. The stock price continued going down following further announcements of Musk about expected job cuts (due to switching to online selling only) and paying $920 million convertible bond obligations by the company.
The stock price has continued to drop during the last week of February as well. Indeed, it has dropped over 16% since Thursday shaving off $8bn from Tesla’s market capitalization.
Investors, and especially some of Tesla’s largest shareholders (such as Baillie Gifford & Co), are not happy with the plummeting stock, which is evident from the statement of James Anderson, a partner and portfolio manager at Baillie Gifford & Co. On Bloomberg news, he claimed that the CEO of Tesla Inc. should leave his position and not harm the company’s performance on markets.
For now, Tesla’s stock price is going down and forecast does not seem to be positive. However, it should be said that these shortfalls are caused by short term news: thus, changes in price may turn out short term as well. It may actually be a good moment for market speculators to buy Tesla stock for a cheaper price. Performance of the company is, however, remaining strong and new announcement are to be expected from them.
​
Vladimer Chogoshvili