On 10 April 2017 Tesla, the manufacturer of electric cars, briefly surpassed the market capitalization of General Motors (GM), thus becoming the most valuable American automaker.
​
Tesla was founded in 2003 in Silicon Valley, California, by a group of engineers.Elon Musk, Tesla Chairman and CEO, was one of them.
The intention of the founders was to create a car company that solely focused on the production of electric cars in order to tackle the long-term issue of carbon dioxide emissions of vehicles. Tesla first gained attention when it presented the first electric sports car, the Tesla Roadster, in 2008. Even though the Roadster was the first major breakthrough of the company, Tesla nearly went bankrupt in 2008. Only the elimination of 25% of Tesla’s workforce and a financing round of $40mn saved Tesla from bankruptcy in the December 2008. After this near-death experience, Tesla had a stellar rise to its position today.

In March 2009, the prototype of the Model S was presented to the public for the first time. The Model S until today is the most successful car in the Tesla portfolio. In June 2010 Tesla launched its IPO, raising about $225mn at $17.00 per share. As part of a growth strategy, Tesla unveiled the Model X, a SUV, in February 2012. The deliveries to customers started in September 2015. In November 2013 Tesla announced the construction of the “Gigafactory” in Nevada, a production site for lithium-ion batteries, which Tesla needs for its cars. Tesla assumes that the production of the “Gigafactory” will double the global production of lithium-ion batteries.

It was the first venture outside the classic car business, as car manufacturers usually do not produce the batteries themselves.
In 2015, Tesla announced the production of rechargeable lithium-ion battery stationary energy storage products, the Powerwall and Powerpack – a further move away from an automotive pure play. The Powerwall and Powerpack are manufactured in the “Gigafactory” as well.

In March 2016, Tesla unveiled the Model 3, which is intended to be the entrance into the mass car market at an envisaged price of $35,000 per car and a sales target of 400,000 Model 3 cars in 2018.
​
In August 2016, Tesla announced the acquisition of SolarCity, a company installing and leasing solar panels to customers. Elon Musk therefore transformed the company from a pure electric car manufacturer to an integrated electric drive company. The goal was to turn Tesla into a one-stop shop for environmentally aware customers, who can buy a car, solar roof and storage system at one dealer. Investors celebrated the strategy taken by Mr. Musk, driving the share price above $300 and making Tesla the most valuable American automaker. 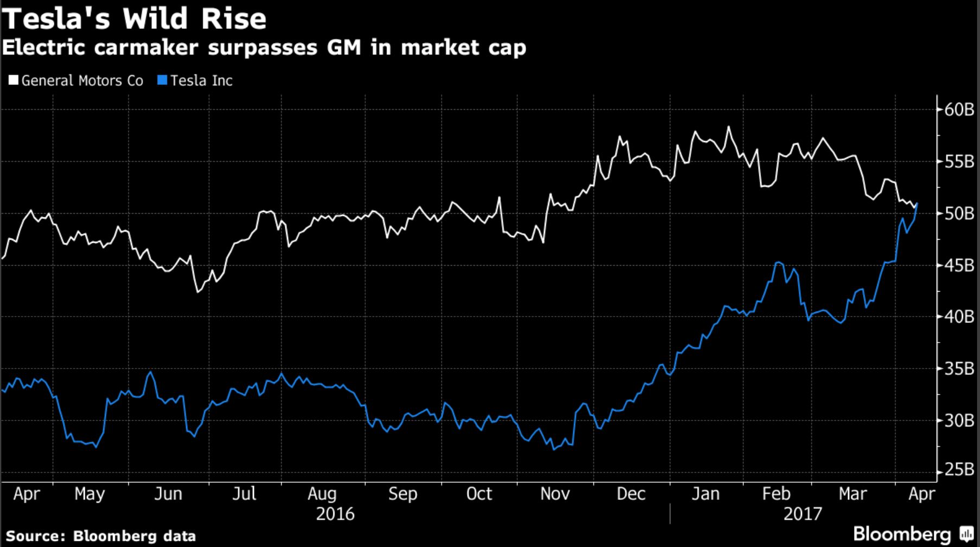 After the stellar rise, critical voices about Tesla are surfacing and short sellers are betting on a decline in the stock price. As of April 2017, there was an estimated short interest of $9.2bn in Tesla. Elon Musk trolled the short sellers, who lost huge amounts since November on their short positions in Tesla:

​However, there are cracks visible in the Tesla story.
The investors who shorted the stock are among the most sophisticated, including hedge fund legends Jim Chanos and David Einhorn.
Mr. Chanos, who runs Kynikos Associates hedge fund, correctly predicted the bankruptcy of Enron and shorted Valeant Pharmaceuticals before its crash, is probably the loudest Tesla and Elon Musk skeptic.

Mr. Chanos criticized, in particular, the $2bn acquisition of SolarCity, saying Tesla puts itself into “walking insolvence” by Z-score standards, since the combined company will have an expected cash burn of $1bn per quarter. He views the business model of SolarCity, which is leasing solar roof panels to customers, similar to subprime finance companies and plain uneconomically. Moreover, he pointed out that, as far as corporate governance is concerned, the transaction is highly questionable: since Elon Musk was the largest shareholder of both companies, the acquisition could have been influenced by conflict of interest and a “bailout” for SolarCity and its shareholders on the expense of Tesla.

Another problem for Tesla could arise from the battery production in the “Gigafactory”.
The dynamics in the battery business have always been challenging because of the high pace of innovation.
Mr. Chanos pointed out that the “Gigafactory” could already be manufacturing outdated battery technology. It appears to be a bold assumption to believe Tesla will be better at manufacturing and innovating batteries than players who are in the business for years, have large R&D departments and vast resources to fund research. Behemoths such as Samsung and Panasonic are major players in the battery market.

Beyond the problems mentioned above, the valuation of Tesla is lofty at the moment and seems to be assuming a best-case scenario. GM and Tesla both have a market capitalization of about $50bn, where GM sold more than 3 million cars in 2016, compared to 76,230 cars sold by Tesla. The market appears to be betting on the sales target of 500,000 cars in 2018 (400,000 Model 3, 100,000 Model S and Model X) and a further increase beyond that. However, Tesla has a history of missing its own guidance. From 2014 to 2016, each year Tesla sold less cars than it initially forecasted. As Jim Chanos put it: “This is a company that can’t forecast its deliveries one quarter out. And yet everybody is confident about what they are going to make in 2020 or 2025.”

Furthermore, competition in the electric vehicle segment is increasing at a fast pace. All major car companies, be it American, European or Japanese, are pushing into the market for electric cars with force. The problem for Tesla here is that the major players in the automotive market can use their multibillion-dollar profits from the gasoline car business in order to subsidize electric cars, selling those at a loss for a limited time. Tesla does not have this kind of cash flow to subsidize its electric vehicles. Large automotive players will have an advantage in the tough and costly fight for the mass market for electric cars.

Tesla had a stellar performance since its IPO. But taking into account the high valuation, large cash burn and the major challenges ahead, potential investors should be careful when considering buying Tesla stock.