Tesla’s Berlin Gigafactory: a duel or an opportunity for German car manufacturers?

Bringing a Tesla plant to Europe has been on chief executive Musk's mind for a few years. On Tuesday, he announced that the company would build its new production plant in Gruenheide, just outside Berlin. Together with the new Gigafactory, an engineering-and-design center will also be established. ‘We want to make Germany, essentially, a part of Tesla’ stated Musk.

Shortly after the news, Musk sent out a pair of tweets to make sure his 29.3 million Twitter followers would be aware of it. He said that the new Gigafactory is expected to open its doors by 2021 and start to produce electric cars including Tesla's latest Model Y along with batteries and powertrains. Adding production in Germany and China will undoubtedly help Musk boost Tesla’s sales in those countries. Conversely, the sustainability of the demand will be more questionable and if local competition becomes real competition it will be more difficult.

Musk’s choice of Berlin was “surprising but not fallacious” said Ferdinand Dudenhoeffer, director of Center for Automotive Research at the University of Duisburg-Essen. Battery-cell manufacturing requires space, infrastructure and subsidies, and the city is a good fit for a premium brand like Tesla’s, he said.

Tesla is an American electric-automobile manufacturer currently operating in two segments: automotive and energy generation and storage. The former is centered on the production of electric vehicles, Model S sedan and the Model X sport utility vehicle (SUV) being the major ones, whereas the latter mainly focuses on stationary energy storage products and solar energy systems and the sale of this electricity to customers. Unveiled in March 2019, another key product is the electric compact crossover utility vehicle (CUV), the so-called Tesla Model Y.

German economics minister, Peter Altmaier, was exultant and stated that Musk’s decision provided further evidence of how Germany is attractive to car manufacturers, thus proving the country’s decennial path towards electromobility. As a matter of fact, unlike any other industrial product, the automobile sector is the best expression of the art of German engineering, with an annual spending of 20 billion euros in R&D and the largest portion of engineers employed.


The speed with which Tesla has managed to ramp up production has applied pressure on the likes of Volkswagen, BMW and Daimler to accelerate their electrification plans.  But the California-based company will now face stiff competition from Volkswagen, which has made the biggest commitment to electrification of any major carmaker, as the industry prepares for strict EU emissions regulations next year.

Last week, German car industry bosses met with Chancellor Angela Merkel’s government in Berlin and urged the administration to do more to boost incentives for electric vehicles, intensifying Germany’s effort to shift from the combustion engine to electric motors, thus reducing exhaust emissions. Still, building vehicles in a country that has some of the highest labor and energy costs worldwide are bound to be a challenge. European customers also expect a network of dealers and repair shops to reliably handle maintenance and repair work, and Tesla has struggled with that lately. 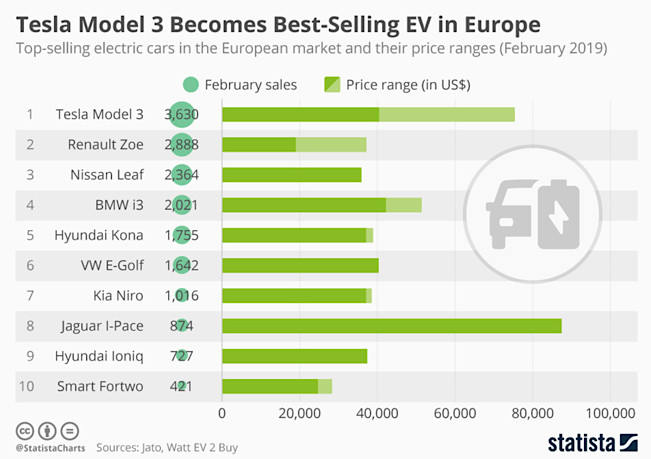 Tesla (TSLA) shares’ price soon climbed Wednesday morning after the news of the new Gigafactory, but then ended the day down 1.1% at $346.11. The stock had risen five straight days and closed Tuesday at $343.93, the highest in 11 months.

Although revenues fell nearly 8% to $6.30 billion for the three months to 30 September, the firm surprised investors with an unexpected profit of $143m in the same time period. It is worth mentioning the fact that these figures come a laser-focus of Musk on Europe and China for growth, while core demand is fading domestically (in the US) relative to other regions. The carmaker said it had cut costs 16% on a yearly basis, making improvements in operating efficiency and a reduction in manufacturing and material costs. Musk said on a conference call that operating costs were the lowest since Model 3 production started.

Tesla was the pioneer in electric cars’ industry. However, with traditional companies making big bets on electric, it is highly likely that Tesla will face serious competition. The VDA, the German association for automotive industry, was indifferent to Musk’s announcement. As pointed out by VDA head B. Mattes, German carmakers were already investing in electromobility and will increase their electric model range fivefold by 2023. As Germany becomes a main player in electric vehicles, Tesla’s choice makes sense because the company needs to be where the action is. Evercore’s Mr Ellinghorst said ‘if Musk wants to play in Europe, he needs to produce in Europe and be seen as a European player’.