Tesla’s Gigafactory 3 in Shanghai is ready for production

Tesla, Inc. is known to be a pioneer in electric car manufacturing. It operates multiple production and assembly plants, notably Gigafactory 1, near Reno, Nevada, and its main vehicle manufacturing facility at Tesla Factory in Fremont, California. Tesla's business strategy is to emulate typical technological-product life cycles and initially target affluent buyers, and then move into larger markets at lower price points. The battery and electric drivetrain technology for each model would be developed and partially paid for through the sales of earlier models. Despite the innovative products and the enthusiasm of its visionary CEO Elon Musk, the net profits of the company in the last years resulted to be negative due to several factors.

Anyway, Tesla last week beat forecasts realizing a quarterly net profit. The Palo Alto, California-based company on Wednesday posted a surprise profit of $342 million, issued a bullish outlook and said its Model Y sport utility vehicle was ahead of schedule and would launch next summer. Wall Street had, instead, expected the company would post a net loss as big as $257 million. Consequently, Tesla (TSLA) shares soared by up to 20% in after-hours trading. Tesla posted adjusted earnings per share of $1.86, better than even the most bullish of Wall Street analysts’ forecasts, which ranged from a loss of $1.25 a share to a gain of $0.34. Third-quarter revenues, however, were $6.3bn, below expectations of $6.5bn and down from the $6.8bn it recorded a year ago. But Tesla justified these numbers saying that the majority of this decrease reflects how the percentage of leased vehicles has tripled from a year ago. The company also said that operating expenses are at the lowest level since Model 3 production started. As a result, the company returned to GAAP profitability in Q3 while generating positive free cash flow and this was possible by removing substantial cost from the business. The earnings indicate that the company is maturing, shifting focus to cost controls after a big-spending phase to roll out the Model 3. 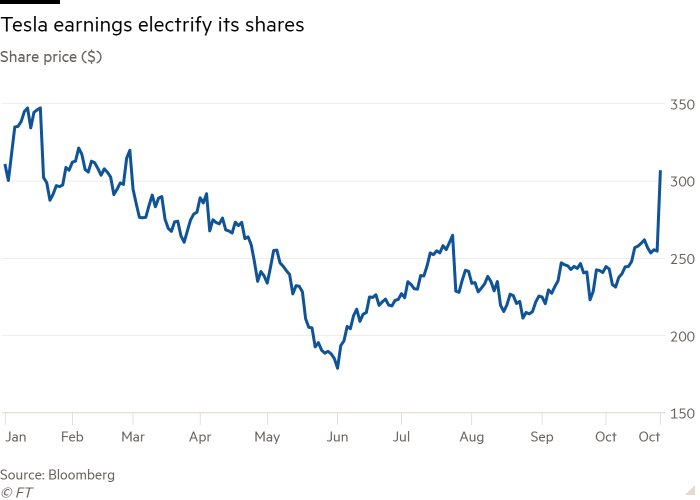 Earlier this month Tesla said it delivered “approximately 97,000” cars in the quarter, setting a record but missing its hope of reaching the 100,000-car milestone. Besides all these positive signals, Tesla announced it is now preparing for its next growth phase thanks to its new Gigafactory in Shanghai that was built in less than a year. The Tesla (Shanghai) company was formally established 8 May 2018, with a share capital of 100 million yuan, wholly owned by Tesla Motors Hong Kong. In July 2018 Tesla CEO Elon Musk signed an agreement with the Shanghai regional government to build its third Gigafactory, and the first in China (the first two are US-based: one is in California, the other is in the State of New York). Mr. Musk has publicly noted the support Tesla has received from the Chinese government for the Gigafactory 3, but some are cautious about the potential for the US company to thrive in China’s electric vehicle market — an industry considered strategically important to Beijing.
On Wednesday, Tesla said in a letter to shareholders that they have also dramatically improved the pace of execution and capital efficiency of new production lines. Shanghai’s Gigafactory 3 was built in only 10 months and is now ready for production. In addition, Gigafactory 3 was about 65% less expensive to build than Tesla’s Model 3 production system in the US. The Gigafactory in Shanghai remains a capital-intensive investment for Tesla, but the company is bullish about the fruits of the project. The factory is expected to help the company hit its 500,000-unit annual production goal and contribute to improving production efficiency globally.

The new Shanghai plant will allow Tesla to sidestep shipping costs and the uncertainties of the trade war and this will help the company to keep prices down. Despite this, there is bad news too. A faster-than-expected economic slowdown has blunted the determination of China to boost the buying of so-called “new energy vehicles” (electric and hybrid cars), and this is weakening the structural support from Beijing. Across China, general auto sales have fallen for 15 months. Range anxiety and poor resale values have damped buyer enthusiasm too. Sales of NEVs fell 34% in September from the previous year. 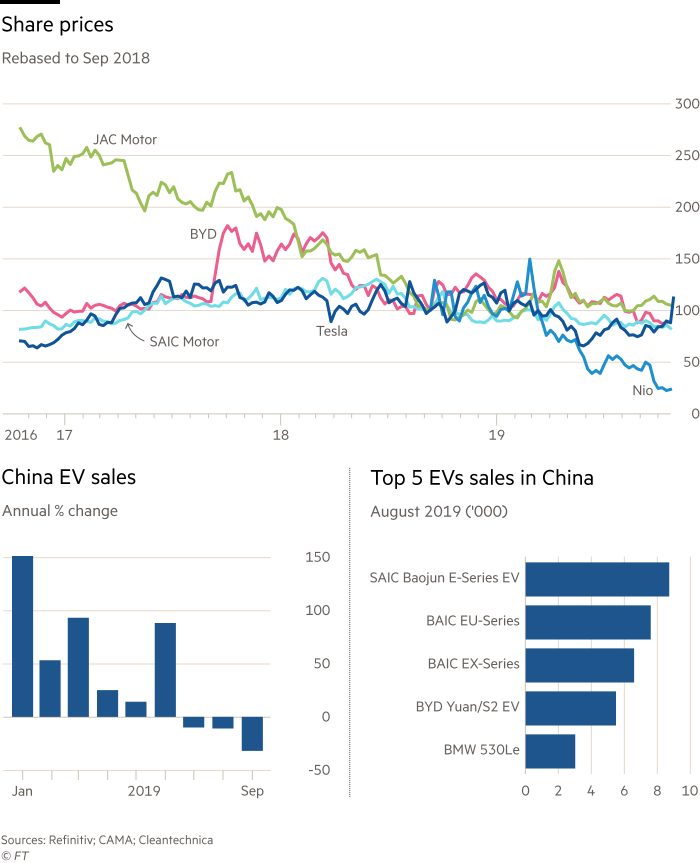 The high price of a Tesla car is an additional hurdle. Locally made Model 3s are expected to sell for about $47,000. Rival runabouts sell for half that price. Furthermore, Chinese regulations dictate that electric cars must account for up to 4% of total Chinese auto output. Hence, many local carmakers sell excess electric cars at a loss to fulfill this. China’s biggest electric car maker, BYD, saw sales halve in September. Its shares, and those of local peers like JAC Motor, are down almost a fifth this year. Nio, a small challenger, is becoming even smaller and more challenged.

Surely Tesla’s CEO Elon Musk is fearless and long-term in his thinking, qualities that are needed in such a tough situation:  Gigafactory 3 will start to produce new vehicles during the Chinese market downturn has just begun. Despite the huge effort required to run the new Chinese Gigafactory, Tesla is already projected into the future: in 2021 it hopes to begin production of a fourth Gigafactory that would be in Europe.