During the first three quarters of the year, Tesla Inc. shares have strongly underperformed both the market and its competitors. However, after announcing its 3rd quarter results in October, which highlighted a surprising $143 million in net income, the stock signed an incredible 30% gain. This performance helped offset its previous losses, apparently setting bears and critics aside. In addition, with October’s performances the electric cars company’s market cap beat that of General Motors. 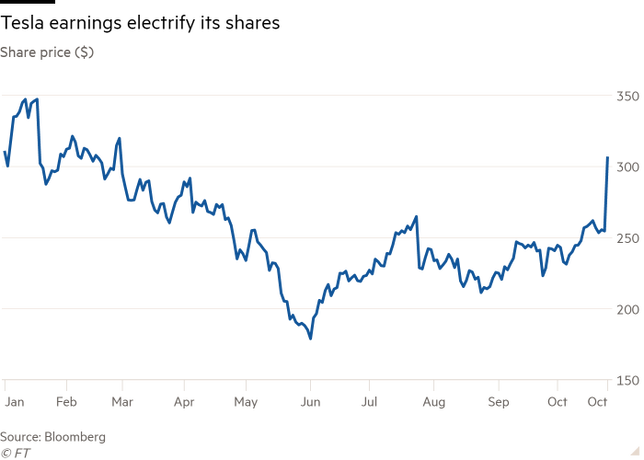 Tesla shares, struggling in the first two quarters, got a boost of nearly 20% on Thursday, October 24th, after the company posted quarterly results
Free cash flow crushed analyst estimates, coming in at $371 million, against expected free cash flow of $32 million. Tesla has now reached positive free cash flow in four of the past five quarters, with a free cash flow of $975 million over the past 12 months. Moreover, in the last quarter the company reported a non-GAAP earnings per share of $1.86, far more than the estimates, which ranged from a loss of $1.25 a share to a gain of $0.34.

On the other side, the company reported revenues of $6.3bn against the expected $6.5bn according to analysts’ consensus. In addition, Tesla settled a new record in terms of delivered cars - 97,000 - but failed to achieve its own target of 100,000 cars. The company added that it is still “highly confident of delivering between 360,000 and 400,000 cars by the end of 2019”. Indeed, automakers typically see strong sales in the last three months of the year, and, Tesla could still benefit from the $1,875 federal tax credit (i.e. electric vehicle incentives) available for buyers of Tesla vehicles. The tax credit will cease at the end of the year.

How did Tesla increase its margins?
​
After an intense spending phase to launch the production of the Model 3, Tesla shifted focus on cost controls. The group stated: “Operating expenses are at the lowest level since Model 3 production started. As a result, we returned to GAAP profitability in Q3 while generating positive free cash flow. This was possible by removing substantial cost from our business.”

While Tesla sold less cars than expected in Q3, Model 3’s sales saw an increase. The latter is a mass production vehicle, so it benefits of greater economies of scale, achieved thanks to higher volumes on top of its fixed-cost base. By the end of Q3, Tesla sold 79,703 Model 3s, 2000 more compared to the previous quarter. Moreover, during this year, Tesla made several price cuts. The effect was that, by lowering higher-priced longer-range Model 3s, Tesla saw more customers opting for upgrading to the higher priced option than the ones that opted for the lower-end standard range. Even though this kept the average selling price in North America flat, higher order volume along with Tesla’s ability to lower input costs enabled to reach a very outstanding margin expansion. Tesla reported an automotive gross margin of 22.8%, up from the 18.9% of the second quarter, while it reached an EBITDA margin of 13.9%, against the 5.8% achieved earlier this year.

On the other side, the company experienced higher average selling price for Model S and Model X vehicles in Q3, even if it sold slightly less than in Q2. This was due to its pricing actions on these vehicles in the second quarter, which included heavy discounts on models produced before the introduction of a new drivetrain and suspension in April. With this strategy, Tesla points out its intention of making premium features standard on the S and X models.

Even if some investors may have been concerned about Tesla's price reduction earlier this year, the strategy seems to have worked, increasing demand and pushing customers towards higher-end and longer-end models.

Besides these factors, Tesla also profited from the release in Q3 of its Smart Summon feature, which permitted owners to “summon” their Tesla to self-drive in a parking lot at low speed to pick them up.

These positive results do not come without critics. Indeed, many have pointed out how Tesla is currently investing a lot less than expected ($225m below expectations), thus allowing free cash flows to grow. This underinvesting strategy can explain 61% of the 3rd quarter free cash flow and may not be sustainable in the long run. In addition, a big part of the 3rd quarter profits came from other income – reported at $126m -, which also contains foreign-exchange gains. At the same time, the company managed to reduce costs, but for how long? 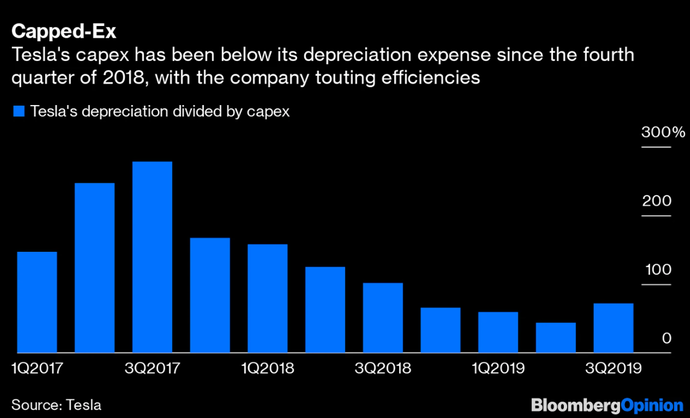 Future prospects:
​
On several occasions Elon Musk expressed his optimism that the company would reach a weekly production of 10,000 vehicles per week by the end of the year and that the upcoming Model Y “will outsell the X, S and 3 combined”. Furthermore, Tesla says that the Shanghai Gigafactory, built in just 10 months, has already begun trial production runs and will start mass production by the end of the year at a cost that will be much less expensive than its production system in the US. The Chinese factory, which will also produce the Model Y in 2020, allow Tesla to lower freight expenses and avoid import duty in a country that already represents their second largest market (after the US). In China electric vehicle sales in 2018 reached 1.2 million more than half the electric vehicles sold in the world.

Though demand will probably cool with the expiration of federal taxes for Tesla’s cars, China’s market will remain stable thanks to the regulation recently introduced, that have made ownership of gasoline powered cars more expensive than electric ones. The Chinese factory is expected to boost the Model 3 production capabilities up to 1000 cars per week by the end of the year.
Edoardo D’Aprile - 20/11/2019