The Private Equity industry has been booming during the past year and, after the first months of 2018, it showed that it will not slow down its growth. Buyout volumes were up 27 per cent year on year in 2017, according to Thomson Reuters, and are expected to accelerate this year, propelled by a record $1.1tn of cash pledged by investors last year. Groups keep creating new funds, raising more money than they expected, as shown by the examples of Partners Group which expected to raise a new €2bn fund, but ended
up with €6bn to invest, and CVC which identified a demand of €25bn-€30bn from investors while raising its new €16bn fund last year. The flood of cash, fuelled by low interest rates on other asset classes, is putting pressure on the funds, due to the increasing amount of unspent capital and consequent unrealized value. 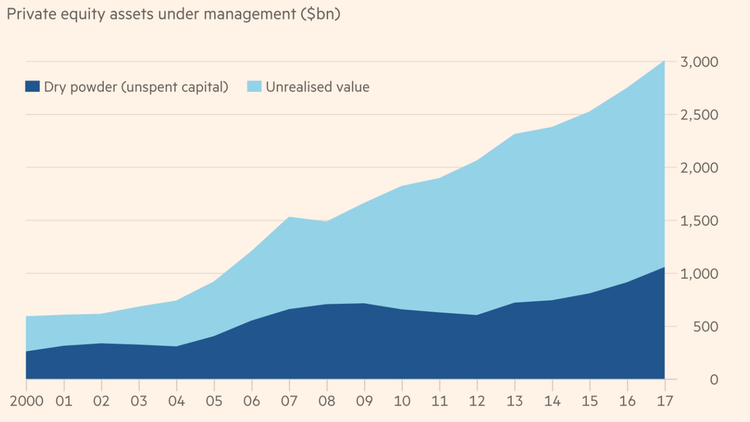 ​Source: FT
​
This pressure has been decisive in boosting the industry, but it also has the drawback to foster aggressive and rapid deal-making that leads to soaring prices for companies: an alarming sign of a bubble that could turn to bust. Regarding the actual situation of the industry, finance professor at Oxford, Ludovic Phalippou, commented “It is quite amazing that there is no collective memory that goes beyond five years, or that the world is organised in such a way that history keeps on repeating”. The size of recent deals has surpassed those pre-crisis peaks, the dependence on debt financing is nearing record levels and the prices being paid are in some cases well over the multiples being paid a decade ago. ​ 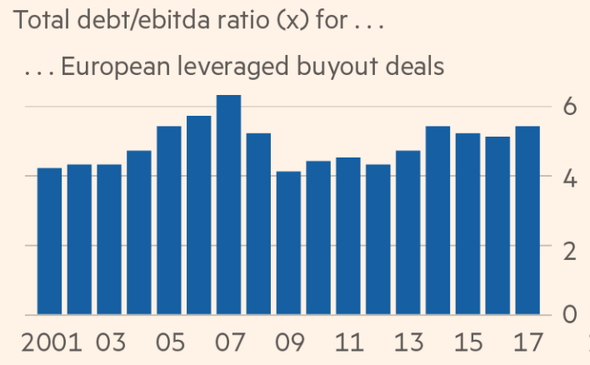 ​
​Source: FT
In fact, the wave of money might make it easier for managers to raise new funds, but the extra competition also makes it harder to find attractively priced companies to invest in. Regarding the dependence on debt, no one is currently predicting a freeze in debt markets as happened a decade ago, but a prospective increase in interest rates is a concern that could create adversities for the industry. The benign outlook for the industry is that even with good deals harder to come by, private equity will still be able to produce better returns than most other asset classes.

​It will be important to see how the future rise in interest rates will affect the supply of money in private equity and the returns of the capital markets, influencing the outcome of the industry bubble.