The Air Berlin Story: The downfall of a rising star

The 27th of October 2017 marks the deathday of Air Berlin, once Germany’s second largest airline. At that day, the airline which was particularly popular among tourists traveling towards the Mediterranean sun seized to exist in its past glory and operated its last flight that landed where it all began, at Berlin-Tegel Airport.

What are the reasons for the downfall of this once so successful German airline?

Interestingly, Air Berlin was originally founded as an American airline in 1978 as a subsidiary of Oregon-based agricultural enterprise Lelco. The reason for this was that during that time, only airlines of the allied forces were allowed to operate in seized Germany. Air Berlin’s mission was to tap in the West-Berlin airline market and concentrate on flights from Berlin-Tegel Airport to Mediterranean holiday resorts. The company commenced commercial flights with two second-hand Boeing 707 on 28th April 1979 with a flight from Berlin-Tegel to Palma de Mallorca (which will turn out to be one of its most lucrative destinations).

In 1990, after German political reunification, also the German aviation market changed to a certain extend. In 1991, Air Berlin was restructured and registered in Germany, with additional domestic investors joining the original founders. But not only Air Berlin’s structure changed, also its offerings were altered slightly. The airline expanded beyond holiday destinations as low-fare flights marketed as “city-shuttles” with destinations such as London, Barcelona, Vienna and Milan as the first ones. Air Berlin also added additional departure airports in Germany, as till then they only flew from Berlin-Tegel Airport.

Air Berlin’s positioning at that time is also worth mentioning. Although it clearly targeted a different customer class than more traditional “high-end” airlines such as Lufthansa or British Airways, it also wanted to set itself apart from the bunch of rising European low-cost carriers such as Hapag-Lloyd, Express or Ryanair by offering complimentary meals and seat reservations.

The period of time shortly after the turn of the millennium can be described as a busy time of expansion for Air Berlin which clearly had the goal in mind to secure the number 2 spot in the German airline market behind iconic Lufthansa. In January 2004, Air Berlin announced that it would acquire a large stake (24%) in Vienna-based Niki Airline. A year later, Air Berlin signed a partnership agreement with regional German airline Germania which was to be acquired later, however plans didn’t materialize and the airline remained independent.
​
In 2006, Air Berlin went public on the Frankfurt Stock Exchange. The IPO was a disaster. Originally scheduled for the 5th May 2006 and priced between 15-17 euros per share, Air Berlin was forced to reschedule by one week due to adverse market conditions and lower the price range to 11.50 – 14.50 euros per share. It started trading at 12€. Maybe this was already the first sign of weakness in this entire story. In total, 42.5 million shares were sold, meaning that €510 million was raised by the flotation. The bulk of this however, went to the airline’s former shareholders who sold most of their holdings, leaving just €194.8 million for the airline’s planned investment program. The Airline claimed however to have more than €400 million to further expand and invest in a new aircraft fleet. Later in 2006, this is exactly what the airline did: in November that year, they ordered 60 large Boeing 737-800 and 15 smaller Boeing 737-700 aircrafts for a total price of €5.1 billion dollars (which is a massive order size at that time). 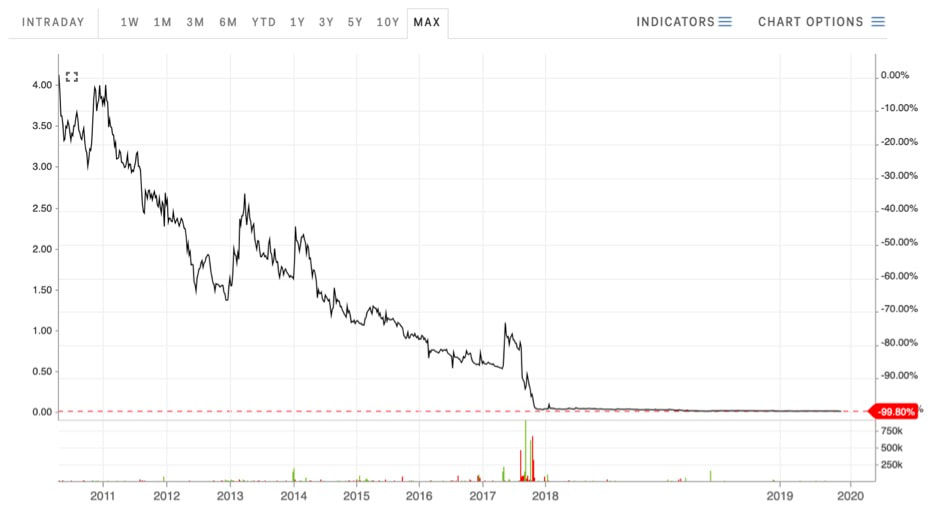 Air Berlin continued its shopping spree and took over German leisure airline LTU which made Air Berlin the fourth largest airline group in Europe in terms of passenger headcount. Furthermore, did it expand the airlines offering even more as it included LTU’s long-haul connections (in particular to the USA and Canada) and introduced long-haul planes such as the Airbus A321 and Airbus A330 to Air Berlin’s existing fleet.
​
Air Berlin continued to spend money, ordering 25 of the brand-new Boeing 787-8 Dreamliner long-haul aircrafts to service its newly acquired intercontinental destinations. Domestically, things looked pretty much the same, with Air Berlin announcing its intention to takeover competitor Condor from Thomas Cook Group. However, adverse market conditions again led this deal to failure. One year later, in 2008, the first real signs of economic troubles emerged, with the company announcing that it will reduce its long-haul services by 13% and its domestic services by 10% in order to increase profitability amidst the financial crisis. 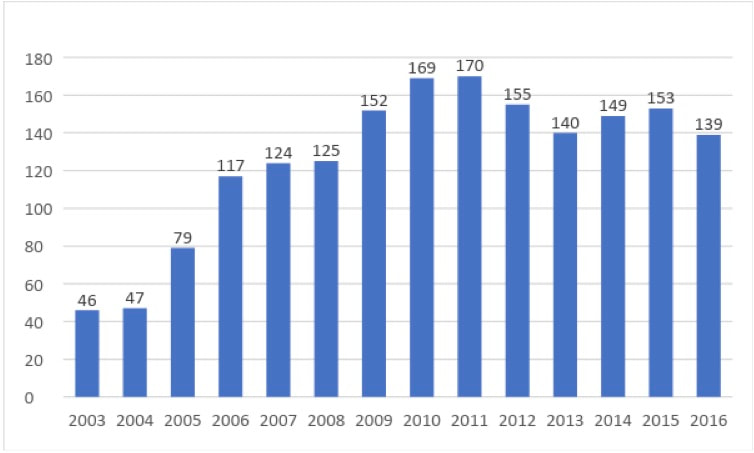 In the following years, Air Berlin signed many strategic agreements with domestic and local European carriers to strengthen its market position. For instance, did it increase its holdings in Niki Airlines to 49.9%. On the 19th December 2011, it was announced that Abu Dhabi based airline Etihad Airways increased its share in Air Berlin from 2.99% to 29.1% for a consideration of €73 million, making Etihad its largest shareholder and valuing the company at around €280 million. This deal was thought to be a win-win solution as it supplied more cash to Air Berlin and provided Etihad access to Air Berlin’s strong European network.

Starting from 2012, problems at the airline became more and more apparent. A combination of adverse factors such as the increase in fuel prices put the company in a bad spot. Although number of passengers remained high, Air Berlin started to lose a lot of money. In 2011 it had a net loss of €420 million. Main priority now was to cut costs, so management decided to drastically reduce the number of flights, in particular to its most popular destination: Palma de Mallorca. For example, Air Berlin terminated the connections to Palma from both Bremen Airport and Dortmund Airport, and with that withdrew entirely from these two Airports. Further closure of local hubs followed. Air Berlin canceled orders of the remaining 32 Boeing’s which they ordered a few years before. Simultaneously they tried to sell-and-lease-back the majority of the planes they do actually own. By 2014, Air Berlin managed to reduce its net loss only slightly to €376 million.
​
A year later however, Air Berlin announced a record loss of €446 million. There is a whole bunch of possible reasons to be considered for the airlines poor performance, and a combination of these most likely led to the predicament the company found itself in: over the years, it had gathered an enormous amount of debt, close to €800 million (and growing) encumbering the firm’s balance sheet. Air Berlin also struggled with its strategy in terms of routes and corporate identity/advertising which it changed rapidly under multiple CEOs. But also market conditions worsened Air Berlin’s downfall: strong competition from ever-expanding low-cost carriers such as Ryanair or EasyJet challenged the company on many of its routes. Furthermore, the delay in the new hub, Berlin Brandenburg Airport (which is still unfinished today), meant that there wasn’t the rapid increase in passenger traffic coming from its hometown that was originally planned.

However, plans to stabilize the sinking plane (if I may use this metaphor) did exist. In 2016, Air Berlin announced “The new airberlin”, a restructuring project which pitched key changes to the airline’s existing presence. The plan was to deeply reduce the number of destinations from 140 to 70, with a focus on the German hubs in Berlin and Düsseldorf. Furthermore, and this is quite interesting as it represents a complete change of image, a step away from the beach-tourists and more towards business travelers within Germany and selected destinations in Italy, Scandinavia and eastern Europe. This also meant that around 1,200 jobs were to be cut.

One year later however, things changed for the worse again. At that point (2017) there was only a very limited number of planes operated by Air Berlin, departing only from Düsseldorf and Berlin. The majority of the remaining fleet had been either transferred to Austrian subsidiary Niki or being wet-leased (“a leasing arrangement whereby one airline (the lessor) provides an aircraft, complete crew, maintenance, and insurance (ACMI) to another airline (the lessee), which pays by hours operated“) to other airlines such as Eurowings and Austrian Airlines, in order for Air Berlin to reduce its monumental mountain of debt which had grown to almost €1.2 billion.  All this effort seemed to bear no fruits as Air Berlin announced a loss of €782 million for 2016.

Then, everything went very fast. During the summer of 2017, Air Berlin, in desperate need for money, turned to its largest shareholder Etihad Airways which refused to inject further capital in the failing airline. It later became known that Abu Dhabi based Etihad invested -and lost- over €1.8 billion in Air Berlin over the years. Air Berlin received a €150 million bridge-loan by the government to keep operations running (or rather flying) and not leave travelers stranded during the peak summer season. Air Berlin at that time was only a cripple, a severely damaged company. The biggest problem for the firm was the immense amount of debt on its balance sheet, which had accumulated to almost €3 billion. What had been left of the company was broken up and sold off to various bidders. At the time of bankruptcy, Air Berlin employed around 8,000 people and had 100 aircrafts in its fleet (which were all leased away). The most important thing however, were the slots Air Berlin still owned. At the airline’s most important hub Berlin-Tegel alone, Air-Berlin held about 45.6% of the slots.

The largest share went to Lufthansa. They acquired more than 50 aircrafts together with the corresponding slots as well as 3,000 employees for a total consideration of €210 million. The majority of the newly acquired planes were believed to be transformed into Eurowings aircrafts to supplement Lufthansa low-cost short-haul offerings through this subsidiary. This money allowed Air Berlin to at least pay back the loan it received from the German government a few months before. The second large chunk of Air Berlin had been purchased by EasyJet: for a reported price of €40 million they took over 25 planes, around 1,000 employees, as well as a large presence at Berlin-Tegel (basically the entire Terminal C belongs to EasyJet now). Niki Air was bought by IAG, which is the holding company behind British Airways, Vueling, Iberia and Aer Lingus. What remained after these purchases is now subject to lengthy insolvency proceedings which officially started on November 1st 2017 and still goes on today. Creditors of the bankrupt airline are selling off the airline’s entire inventory — from coffee mugs to a six-meter model A320 and everything in between — in a desperate bid to recoup cash for unpaid bills.

On 27th October 2017, Air Berlin’s final flight departed from Munich at 21:36 and landed where everything began, at Berlin-Tegel Airport at 22:45, after one last honorable round around the Tower. One of the most famous German airlines has stopped to exist. The author of this text has some great memories travelling with Air Berlin throughout the years. This represents an example of one of many airlines that failed in the recent past amidst strong competition and difficult market conditions. The same story could repeat for other companies as well: as an example, Alitalia could be the next, considering that it is in deep financial troubles. These stories look very similar: government loans, involvement of Etihad Airways (although this is most probably only a bad coincidence) and high likelihood of break up (in October last year, Lufthansa offered around €500 million for large parts of Alitalia). However, there has also been a string of internal errors and misjudgments, in particular when it comes to the heavy spending in the early 21st century. The airline never settled on a strategy: for the majority of its operations, it wanted to be a discount carrier focused on attracting leisure customers, but it never managed to get its costs match other low-cost airlines in Europe.

Nevertheless, it has always been a pleasure to be a passenger on any of these flights; Air Berlin, you will be missed.