The battle for Anadarko: Chevron vs. Occidental

On April 12th, the Chevron Corporation (NYSE: CVX) announced a deal to acquire Anadarko Petroleum, an American oil exploration company. The stock and cash transaction, taking a value of $33 billion at $65 per share, would pay a premium of just under 40% based on the previous closing price. Additionally, Anadarko’s debt of $16 billion would also be covered, bringing the deal to an enterprise value of $50 billion.

For Chevron, one of the world’s largest oil companies, the acquisition would mark a strategic move in gaining advanced access to natural gas resources and drilling operations, boosting the firm’s Upstream operations. It would make Chevon’s domestic business unit comparable to that of ExxonMobil and significantly change the landscape of the US upstream sector.
Looking at Anadarko itself, the company is of particular value as it holds expansive land assets, promising access to significant oil reserves. Following the announcement of the deal, Anadarko’s stock saw a jump from $46.80 to $72.93 per share, underlining investor’s content. Nevertheless, the company has also been consistently one of the more unproductive oil producers, being able to squeeze just less than half of Chevron’s revenue per oil well. Similarly, Anadarko’s share price performance over the last year hasn’t been exactly promising either, dropping by over 40% at times, as illustrated below. 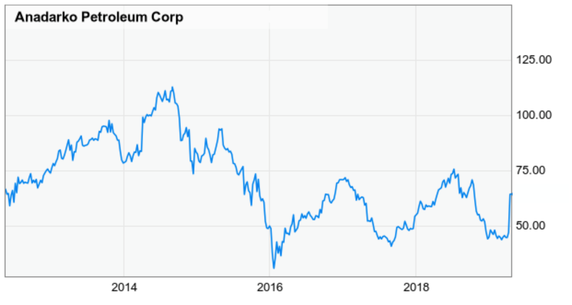 Source: https://seekingalpha.com/article/4256207-anadarko-executive-cash-key-preferring-chevron-occidental
However, although Chevron and Anadarko had come to a definitive agreement, rivalling oil producer Occidental Petroleum (NYSE: OXY) announced on April 24th a similar bid to acquire Anadarko. Occidental’s offer however stands at $76 per share, totalling to $38 billion and making it $11 per share higher than Chevron’s bid. The company has also offered a significantly higher proportion of cash and stock, with shareholders receiving $38 in cash for each Anadarko share, compared to that of $16.25 per share of Chevron’s offer. The bid would therefore be $5 billion higher than Chevron’s and marks a significant move on the side of Occidental in attempting to outbid its rival.

Anadarko has meanwhile announced that Occidental’s offer is being considered and asked Chevron to make a counteroffer, exposing the oil sector to a potential bidding war between the two firms. Chevron has however signalled its intention not to increase its offer, as it currently represents the “best value” for shareholders, which essentially leaves Occidental with a winning hand, at least as of now. This is further solidified by an announcement of Berkshire Hathaway to commit $10 billion to Occidental to help finance the acquisition. Hathaway’s intentions also provide a degree of certainty to the deal, eliminating potential equity risks related to Occidental’s comparable smaller size, both in absolute terms and with regards to cash reserves.

Yet, experts have questioned whether Anadarko would be better off with Occidental’s bid. While from a pure equity perspective Occidental gets the upper hand, things look differently when analysing integration and long-term fit. As such, Chevron is clearly the larger firm and Anadarko would significantly benefit from the strategic synergies that a deal with Chevron creates. Furthermore, Anadarko is also bound to pay a $1 billion break-up fee to Chevron, if it agrees to Occidental’s offer.

Ultimately, the coming weeks will prove which of the two firms, or even if any, will receive the bid for Anadarko. As of now however, a victory for Occidental seems more likely.