​​The Covid-19 and its epidemic effects on the Italian economy: a European antidote to the Contraction? 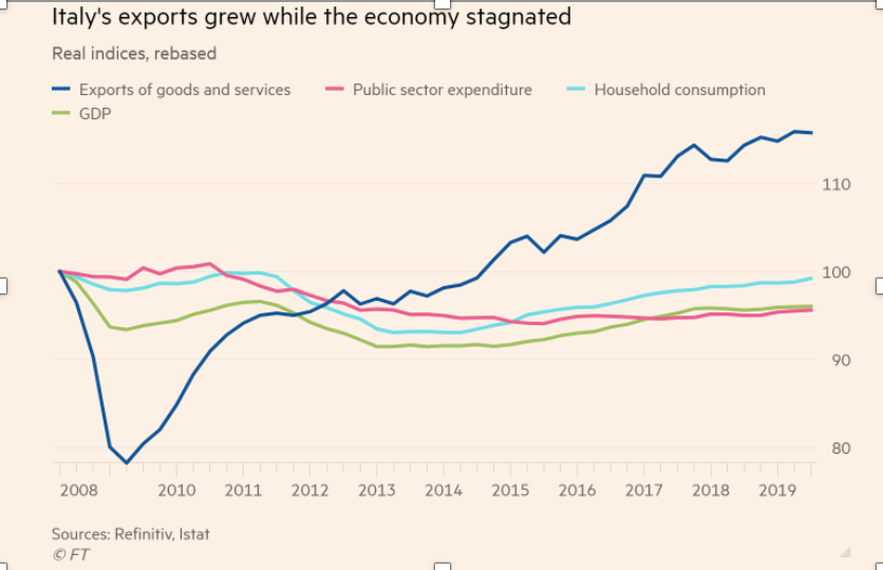 Grappled with the largest Coronavirus outbreak outside Asia, Italy counts 821 confirmed cases and increasing virus-linked deaths, mainly occurred in the regions that are producers of one-third of National GDP, namely of Lombardy, Piedmont, and Veneto. In response, Milan and Venice, respectively nations' finance and tourism capitals, implemented emergency actions closing schools, offices, and tourist attractions, while 10 other northern towns and people moving from infected areas have been quarantined.

Italy was already experiencing a technical recession, with its steepest decline in six years, and the consequences from this exogenous shock could lead to a further, despite signs of a general bullish phase since January 2019.

Work and supply-chains disruption in luxury and agriculture industries, tourism and travel restrictions will weight heavily on the already struggling Italian budget deficit and a stagnating economy. However, some sectors came out winning and unscathed, and European measures may turn out to be an antidote to stem the epidemic in global markets.

Outbreak and the financial markets: Deep in Red for stock exchanges
As investors have been seeking for safety this week, downturns in shares prices marked the FTSE-MIB index: this weekend starts with a -3.58% at 21.984,21 points, compared to the prior, time of urgency spike, when fell by - 4.6%, tracked as its worst day since Brexit Referendum in June 2016. Nevertheless, the bottom has allegedly been reached and passed. All stocks listed are in negative territory - except for Juventus, surged up to 2%- despite a +1.44% Wednesday closure pulled by Fca and Saipem, which made Piazza Affari the best performing among the Old-World exchanges. For instance, the latter and Wall Street show sharp declines as well: -3,86% DAX 30 (Frankfurt), -3.38% CAC 40 (Paris), -3.18% FTSE 100 (London), - 1.39% DJI (New York).

Tourism, paying the highest stake
Italy's tourism, with its value-added contribution of 6% on GDP, is particularly vulnerable to the deriving shutdowns, pushing Federturismo to call for activating the industry state of crisis, and supportive maneuver for the workers and enterprises' safeguard. As reported from the Bank of Italy, 128 million visitors arrive annually, half of whom are foreign tourists with 42 billion euros of spending in the Country last year.

Warningly harmed is also Venice, and its world-wide famous Carnival, which hosts thousands of tourists. Furtherly damaged by last November floods during the Biennal period, the authorities have suspended the event aiming at containing the infection. Furthermore, postponing international fairs and sporting events seems detrimental to the conclusion of contracts.

Hotels, Tour agencies, and airline companies are dealing with massive cancellations and delays. Even if President Trump reassured no air traffic embargo, Austria is momentarily considering control and travel restrictions, having already suspended train services across borders, and movements to and from the country have been blocked for citizens coming for infected areas.

The sharing economy's services became interestingly unpopular during infectious times. Uber is, weekly, down of 1.51%, Airbnb and Deliveroo are rescuing the same amount of trouble in their valuations.

Made in Italy exports: an unfashionable fallout

Concurrently with tourism, Made-in-Italy exports helped sustain the growth, powered by its long-lasting international reputation in high-value products, even when the economy stagnated internally.


​As a share of GDP, it was expected to be nearly 31% in 2020. Ranging from high-quality sectors from luxury fashion to food, Italy's exporters are recognized to be twice more productive than domestic-focused businesses, as well as being bigger in size and bargaining higher wages.

Those features amplify the pain of being exposed to a crisis on the domestic labor market and public finance as a whole, given the persistent fragility coming from the low productivity of non-exporters, adverse demographics, and slow job growth which already affect the flat Italian household domestic consumption, compared to other major eurozone economies.

Coldiretti, Italian agricultural industry's representative, mentions the apparent rise of a downside risk of paralysis for the 500 agricultural, mainly small-capitalized, firms located in the red zone, and stresses the key position of those districts for their ability to process, package and dispatch products.

Weakness in Italyʼs manufacturing- sensitive economy is further driven by the first hit China had from the coronavirus. Market shares in apparel manufacturing have declined sharply. Indeed, production factories are still shuttered in China for Italian labels such as Giorgio Armani, Prada and Moncler (MONC.MI). Already suffering from decreasing spending from Chinese consumers and supply chain disruption, Italy is second-ranked in Europe for fashion and luxury good sales. In response to the shock, sectorial total revenue is expected to fall by 1.8% in the first half of 2020, compared to the 90 billion euros of last year, equal to 5 % of the national GDP.


Supermarkets and Healthcare: Winners of the psychosis effect
The strong emotional impact from the disruption of everyday life is popping up in the supermarkets and pharmaceutical's frameworks.

Primary products as pasta, sauce, sugar, milk and house cleaners sold like hotcakes. Latex gloves, disinfectant gels, and bleach products are in short supply, a sudden rise phenomenon that occurred in occasional events like the Chernobyl disaster or the Gulf War. Consistently, there have been peaks of sales during the weekend: Esselunga reports a doubled demand; Carrefour witnessed spikes of non-perishable goods in interesting areas up to +130%, whilst their e-commerce platforms have increased tenfold volumes of traffics.

Given precautionary actions, the increase in attention paid by citizens is directly translated into an enhanced demand for hygiene. Particularly, a tremendous rise in the request for the disinfectant Amuchina. Its company, Angelini Pharma, with an annual turnover of 1.645 billion, has therefore decided to satisfy it by expanding its 8 million pieces productive capacity in the Ancona plant, reallocating the industrial activities in to be exclusively dedicated to the making of antiseptic, outsourcing that of detergents. Nonetheless, the higher willingness to pay of consumers did not vary prices, according to Italian Health ministry indications, but unjustified hikes have been implemented by unqualified providers.

Telecom and Media: Immunized against the virus
To avoid public places, homebound and fearful people have incentives to spend more time on social platforms for tracking news stories about the virus and communicate through devices. Evermore shocks and economic slowdown resilient sectors can, therefore, be designated: telecommunications and media.

Within the blue chips, Telecom Italia (MI: TLIT) stands out for containing losses, by exploiting its neutrality to State containment measures, whilst taking advantage of incremental phone calls and internet trafficking as primary means of communication in the short future. After closing the 02/27 with a rise of +3.51%, it is considered the index weekly best performing stock. Moreover, the race to smart working in affected areas positively affect the networking increasing demand.

(European) Unity is strength
Despite being the impact still relatively small and temporary, as argued by the economy minister Gualtieri, a wider spread of the epidemic is a concern a Europe teetering on the edge of a weak recovery, with a zero-growth Germany, insofar as the Covid-19 decreasing curve may still have some bearish leeway. Therefore, the national year's growth rate could shed as much as 0.3 percent, as Bank of Italy governor Visco underlines.

Even better is Mario Draghi's recommended dream: a centralized euro-zone fiscal capacity, provider of an effective tool to address localized issues, channeling resources depending on the country's needs. In a worst-case scenario, the ECB confirmed its disposition to further cut the already negative rates.
While waiting for common strategies' implementation, encouraging is the allocation of 230 million euro from the UE to fund specific WHO research, programming testing and diagnostics on the virus, as well as partnerships with pharmaceutical industries.