The South China Sea has been home to maritime disputes since China laid claims on almost its entirety with the nine-dash line (then eleven-dash line) in 1947.
In April 2021, China and the Philippines had an unusual confrontation following the threatening presence of more than 200 Chinese fishing vessels near the Spratlys islands, located in the middle of the region. 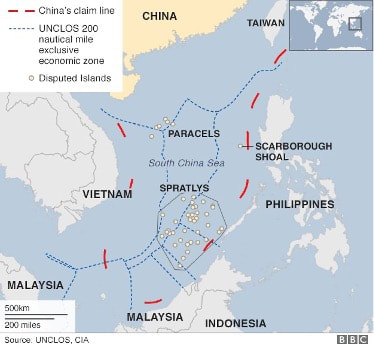 South China Sea’s economic and strategic importance
The South China Sea is an extremely important zone both economically and strategically. Several countries in South East Asia have laid claims to parts of it, notably China, Taiwan, Vietnam, the Philippines, Malaysia, Indonesia, and Japan.
This sea is rich in natural resources: its waters are heavily fished, at the point that multiple areas have been permanently damaged by excessive fishing. The densely populated South East Asia has always relied on fishing for their protein consumptions, but often the aggressive fishing of tuna, shrimp, and shellfish has led to environmental issues and a number of disputes have been filed against the illegal activities in the area. In addition to this, massive reserves of natural gas and oil have been found below the sea, mainly in the regions where the Paracels and the Spratlys are located. Lastly, the entire South China Sea is home to some of the most important shipping lanes worldwide. China is the world’s biggest exporter, and the majority of its goods need to travel across this area to reach South-East Asian countries, Africa and Europe.
From a political and strategical point of view, this area is home to continued confrontations between China, the US, and US-backed allies. The US has an interest in keeping this region free and democratic as it is a crucial area from a military standpoint. In fact, the US has multiple aircraft carriers, military bases, and vessels in that area, and they are necessary to protect Taiwan from China’s advances, as well as to avoid China taking the control of the Spratlys islands. The nine-dash line is a vague claim without a formal and well-defined right to the region.
On 12 July 2016, an impartial court of the United Nations Convention on the Law of the Sea (UNCLOS) ruled that the Chinese claims over the maritime areas inside the nine-dash line are unlawful and that they go against the maritime miles established by the UNCLOS. However, both China and Taiwan rejected this ruling.

China-Philippines relationship
A particular relationship unfolding in the South China Sea is the one between China and the Philippines, with both countries claiming part of the Spratly islands as their territory. Rodrigo Duterte, the Philippines’ president since 2016, brought his country closer to China during his presidency and further away from the US, the Philippines’ traditional ally. China is the Philippines’ biggest trading partner, as can be seen in the graph from 2019. Exports to China were second only to the US, while imports from China were massively higher than from any other country. 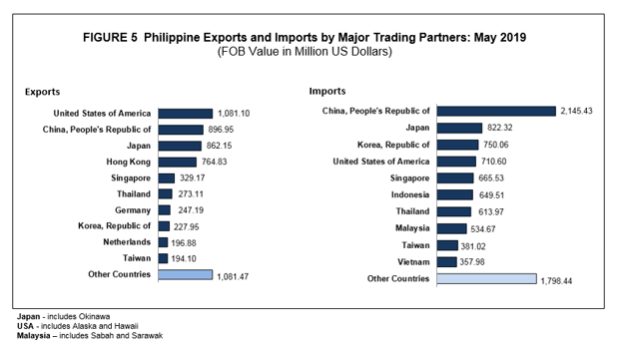 Duterte aligned more closely to China, and in 2018 the two countries signed a memorandum on joint exploration in the South China Sea. The area is theorized to contain rich reserves of natural gas and oil, therefore bringing several countries’ attention to the region. The Philippines had started exploration and drilling activities back in the early 2010s but had to suspend all the activities in 2014 following rising tensions with China.
After the UN’s ruling in 2016, which considered the nine-dash line unlawful, the countries in the region started their exploration activities again. The Philippines, however, resumed their activities only in fall 2020, independently of China, with the energy secretary Alfonso Cusi saying “we trust China will respect our sovereign decision”. China, on the contrary, said that they hoped the two countries could continue to cooperate and jointly develop the resources in the area.
In April 2021, more than 200 Chinese fishing vessels moved and stationed themselves around a reef in the South China Sea. This presence was extremely alarming, and the neighboring countries, as well as the US, condemned the action as they feared China would build permanent infrastructures in the reefs to increase their maritime claims. China, however, rebuked those claims and affirmed that those vessels were simply sheltering from the wind.
The US condemned Chinese actions and remarked once again their support for the Philippines, as well as for Taiwan, with the latter suffering from Chinese warplanes flying over the air defense identification zones multiple times in the past few months.
The Philippines accused China of completely disregarding maritime rights, confronting China openly in what experts consider an unusual stance.