The economic value of a Bitcoin: beyond the tweets

Conceived in 2008 by the anonymous cryptographer Satoshi Nakamoto as “A peer-to-peer Electronic Cash System” allowing online payments without going through a financial institution, Bitcoin is one of the most debated instruments in the financial industry: little divides opinion among Academicians and Professionals as fiercely as Bitcoin.

From being considered by asset managers dangerous and potentially disastrous due to its huge volatility, Bitcoin has been recently contemplated as a challenger of gold in many portfolios.
In recent times, expectations about rising inflation due to Central Banks engaging in post-pandemic stimulus programmes has led many proponents to think of Bitcoin as an asset protecting against currency debasement. Indeed, designed in such a way that there can only ever be 21 million Bitcoins in existence, its capped supply is the guarantee, according to Nakamoto’s original idea, that this sophisticated currency, contrarily to other fiat currencies such as USD or Gold, would not lose value over the time.

A new spotlight on Bitcoin: Tesla’s announcements
​
The major event(s) that – in recent weeks - turned the spotlight on Bitcoin and on the many diverging “narratives” related to it was the announcement by Tesla of the massive purchase of $1.5 billion worth of Bitcoin. The commitment of a substantial portion of Tesla’s Cash (around 8% of the total, considering that the company had more than $19bln in cash and cash equivalents on hand at the end of 2020) in a so “erratic” and debated asset comes after a series of Elon Musk’s tweets concerning the Bitcoin itself.
Bitcoin and Tesla’s prices have been so heavily affected by these announcements that the electric cars’ producer has acted as a true “Trojan Horse” in the markets, letting Bitcoin’s volatility affecting Nasdaq and S&P 500 movements as never done before.

Since the first signals of “endorsement” by Elon Musk in December 2020, Bitcoin’s price started to rise.
Source: FactSet
In the wake of Tesla’s announcement, BNY Mellon – America’s oldest bank – has declared it would start holding and transferring cryptocurrencies for asset management clients, while Mastercard announced it would soon support “select cryptocurrencies” on its network.

In some sense, if 2020 can be remembered as the “outing” year for many big Investment banks in the world – which expressed their views, yet diverging and sometimes contradictory, on Bitcoin’s strengths and weaknesses – 2021 seems to be featured by an increasing interest in the Cryptocurrency coming from the corporations’ world.

Any economic value behind the so-called “digital tulip”?

When it comes to talk about Bitcoins, we always see many changes in narratives and many diverging perspectives. But what’s behind Bitcoin? Whether it is a bubble or not, what is the Economic value of a Bitcoin, if any?
The issue of the potential economic value of the Bitcoin has been addressed by very few studies and papers, and many asset managers and institutional investors have demonstrated to blame its huge volatility on a “stand-alone” basis, without a deep analysis of its financial role and (and possible positive) implications in a Portfolio Theory Analysis.

A study undertaken in 2018 by two Professors of Leeds University Business School and Norwich Business School tries to go beyond the many and often unjustified beliefs surrounding the Bitcoin, attempting to investigate the Bitcoin as a mainstream financial asset in risky portfolios of various assets.
Investigating the value added from Bitcoin in four different asset classes portfolios - Exchange rates, Gold, Oil and a diversified pool of stocks – the Authors demonstrate that there are many statistically significant diversification benefits from the inclusion of Bitcoin in these portfolios, and the decrease in the overall portfolio risk due to the low correlation of Bitcoin with other assets is not offset by its high volatility. In other words, while the huge and uncontrollable volatility of Bitcoin is undeniable, the unconditional correlation of BPI (Bitcoin Price Index) with the other risky assets is remarkably low suggesting that the inclusion of BPI could increase the diversification benefits of a portfolio. 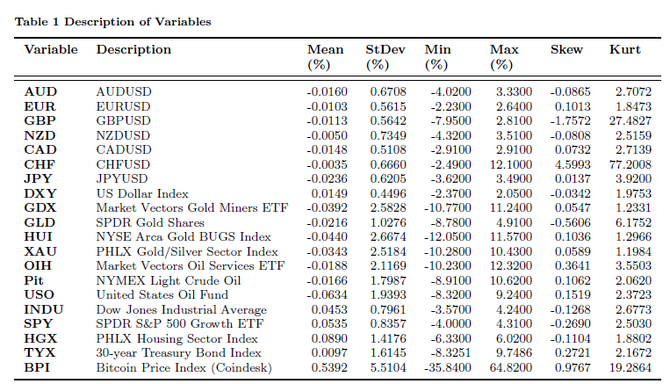 This table describes all the risky assets that are considered in the empirical analysis.
All these assets have been divided in the four different asset classes mentioned above.
Source: Symitsi E., Chalvatzis K. “The Economic Value of a Bitcoin: A portfolio analysis of Currencies, Gold, Oil and Stocks” (2018)
Given the four different portfolios of Currencies, Gold, Oil and Stocks with average correlations of 0.4503, 0.9429, 0.8159, and 0.9257 respectively, introducing Bitcoin in those portfolios could lower the average correlation up to 0.3488, 0.7907, 0.5187 and 0.4982[1]. These diversification benefits persist, even if they become lower, also when it comes to consider a multi-asset portfolio made of currencies, gold, oil, stock, real estate and bond (the average correlation, in this case, reduces from 0.0812 to 0.0628 with the inclusion of Bitcoin).

In conclusion, despite its huge volatility, evaluating the Bitcoin from a “portfolio perspective” reveals that it could be an attractive investment for a risk-averse investor reluctant to high risk exposure investing, thanks to its low correlation with many other assets. May this whet asset managers’ appetite?


[1] As stated by Symitsi E. and Chalvatzis K. in their 2018 Paper “The Economic Value of a Bitcoin: A portfolio analysis of Currencies, Gold, Oil and Stocks”, these correlations have been obtained using daily prices for Bitcoin for the period from September 20,2011 to July 14, 2017.