This is the second rate hike in more than a decade, back to the financial crisis of 2007/2008. The Federal Reserve raised its benchmark interest rate for the first time last 16th of December 2015, when the Committee decided to increase the target range for the federal funds rate between 0.25% - 0.5%. 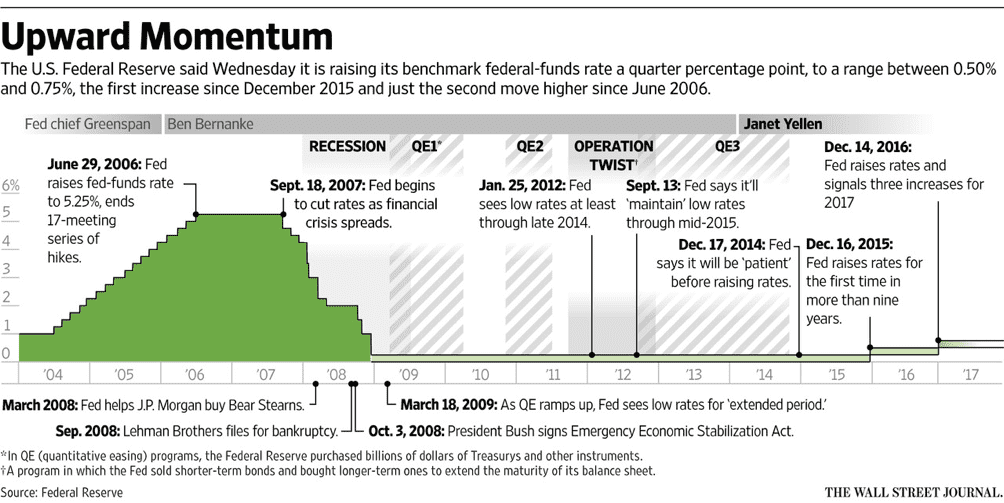 The decision is suggested by a brightening economic outlook: the unemployment rate has fallen to 4.6% in November, hitting a nine-year low, the American economy is growing by roughly 2% a year since 2010 and inflation is picking up, getting closer to the Fed’s benchmark of 2%.
​
Moreover, considering President-elect Donald Trump’s fiscal stimulus to the economy based on tax cuts and infrastructure spending, with a target rate of economic growth of about 4%, there is the possibility the Federal Reserve may have to accelerate the pace of the tightening to prevent the economy from overheating. The Fed has stated the economy is already growing at the maximum sustainable pace and there is evidence of a tense labor market (shortages in several professions in various districts around the country).
Although, the chairwoman of the Board of Governors, Ms. Janet Yellen, said “We’re operating under a cloud of uncertainty at the moment,” and “We have time to wait and see what changes occur,” which means the Fed will wait and respond properly to future fiscal policies.

With respect to the previsions made in September, the economic outlook is slightly more promising with a forecasted next year growth of 2.1% up from 2%. The benchmark rate will be raised more quickly, by the end of 2018 it has a median forecast of 2.125% higher than the previous 1.875% predicted, and 2.875% in 2019 compared with the 2.625%. The long run interest rate is projected to be lifted to 3%. For the next year three rate hikes are expected as well as for the next two following years. 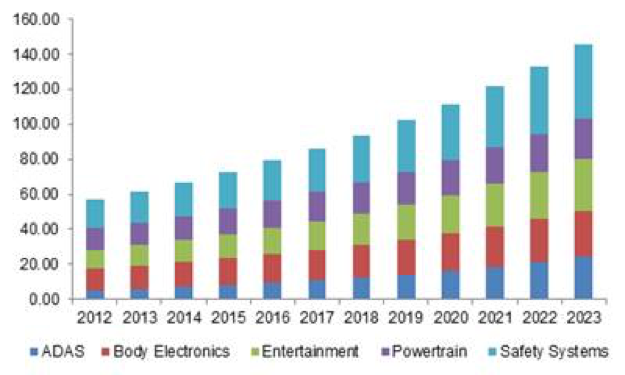 The stock market slumped to this expected interest rate rise. After the announcement, the DJIA which was at 20000 and had closed for seven times straight at record levels, dropped by 119 points (fell by 0.6%). The S&P 500 slipped 0.8% and the NASDAQ 0.5%.
As for the bond market, which had already been hit by the US Presidential elections, it had experienced an additional upward move, the two-year note increased to 1.30% from 1.16%, beating its highest level since 2009. The five-year note and the ten-year Treasury have respectively a yield of 2% and 2.60% higher than before the announcement.

Since higher yields are attracting capital into the country increasing the demand for dollars, the greenback surged as expected. The US currency rose by about 1.3% against the yen, the euro fell 1.1% and the next day it tumbled to a 14-year low to $1.04 per euro. The pound dropped by 0.81% after the announcement. The dollar index, which measures the currency against a basket of six major currencies (Euro, Yen, Sterling, Swiss Franc, Canadian Dollar and Swedish Krona) was up 0.66% to 101.760. 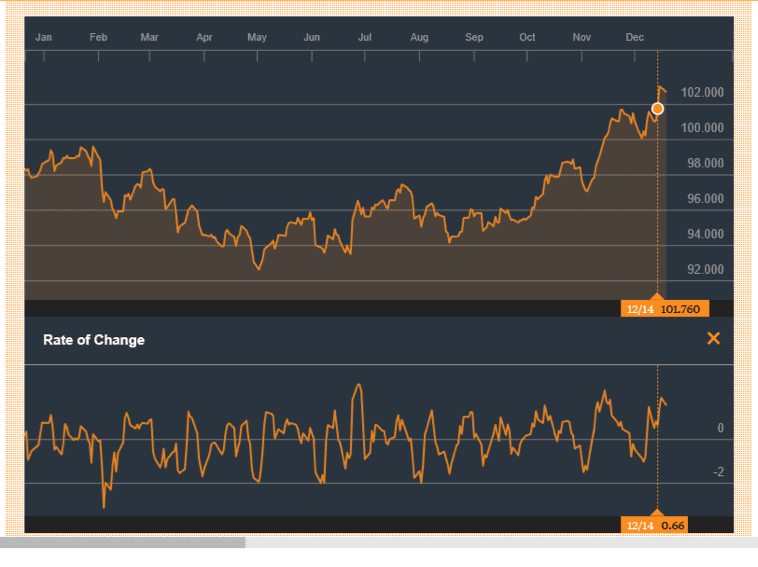 On the other hand, the interest rate hike translates for households and businesses into higher borrowing costs. Wells Fargo & Co., JP Morgan Chase & Co. and Bank of America Corp. raised their prime lending rate, which is the one banks charge to their best retail customers, by a quarter percentage points from 3.5%. This has “transmission” effects to most of banks lending activity, affecting interests charged on credit cards, car loans and mortgages. Consequently, this will benefit banks as their interest margins will increase given that usually interest rates on deposits move “lazily”.

Banks stocks have experienced a bullish market since the US Presidential elections and after the Fed’s announcement they were one of the few economic sectors which had an upward trend. The KBW Bank Index has rallied 24% since Mr. Donald Trump has been elected, reaching its highest level since February 2008.