The "Game Changer" in SK's strategy

SK Group is South Korea’s third-largest company. The conglomerate comprises 95 subsidiary companies with 113 offices around the world and a total of 70,000 employees. What characterizes every portion of the firm, beyond the shared brand name, is the group’s management culture, the SK Management System. The company’s largest business regards industries of chemicals, petroleum and energy. The energy and chemicals division is the most crucial part of the entire group. Moreover, SK Group has also diversified its portfolio; not only the company owns SK Telecom, the largest wireless mobile phone service provider in South Korea, but it is also present in the semiconductors' industry through a merger with Hynix closed 10 years ago.

In this last period, the company has communicated the shocking decision to end all its new investments in oil and gas overseas and to lower the gas emission by two-thirds. This choice might change the entire focus of the South Korean firm and affect the entire world of investments. This response is considered an extremely important victory for many activists that are concerned about the environment, as it is needless to say that the conglomerate with its businesses is damaging the planet. Therefore, this change might put the company in a higher and better position compared to its rivals given that the latter is still very criticized by environmental groups and are under the public eye for not changing their policies.

Behind this big change, there might be a political reason; the bulk of the economy of South Korea is controlled by family-owned conglomerates (Chaebol). Therefore, Chey Tae-won, SK’s Chairman and main shareholder of the company, might have decided to take the challenge to become the leading Chaebol. He plans to readjust the business portfolio within the next three years, to reduce the carbon-intensive activities and to increase the wagers of the firm across electrical vehicles (EVs), computer chips, biotechnology and renewable energy.
The group has decided to modify its business approach thanks to Mr. Chey's extremely powerful leadership, which sensibly changed the conglomerate that was owned by his father. Chey Tae-won has been able to increase sales by four times, total activities by seven times and net profit by eighty times. The Chairman is now one of the richest men in Asia.

SK group has already started to implement some of its new strategies and for the moment it seems that the changes made some goods improvements. The company, in recent weeks, has bought Intel’s memory business for $9bn and the country’s most important waste disposal firm for $1bn. Moreover, the group is investing time and money to improve its EV batteries service. The aim is to construct factories around the world to be used for carmakers in countries like the Us or China, even if SK would like to reach Europe too. 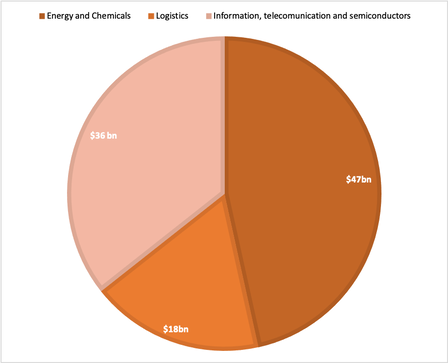 SK’s total revenues in 2019, by business. (+72% compared to 2018). Source: FT
​On the other hand, SK is also facing some challenges: the main issue is that the group is not completely “clean”, as it is often associated with corruption and political and intellectual property theft. In particular, Mr. Chey was accountable for fraud and misappropriation (he has even been in jail for a couple of years) and the company is accused of having illegally acquired EV technologies from Korean competitors. This implies that, even though the company makes progress, it is very difficult to change its bad reputation; what happened in the past will remain unforgotten by many investors for a long period. Another problem is that conglomerate lacks in terms of global brand recognition. Many of its rivals such as LG do not face this issue, and this might make the global expansion more difficult.

Finally, it is always compared with Softbank, the Japanese multinational conglomerate specialized in the technology and energy sector. Softbank is extremely profitable, well-diversified and geographically expanded: this comparison might lead to a lot of pressure, it is not easy to be compared to such an important holding.

In conclusion, it is important to underline the significant results that SK has achieved. Last month's decision regarding oil and gas investments is a major sign that the group wants and can change. The company is trying to become more correct and valuable; from the 2019 results (increase in sales and profits) we can say that the group is facing a positive general growth worldwide.