Since the beginning of the year markets high volatility is fostering demand for commodities and government bonds. Billions of dollars and euro are currently moved from equity to safer assets. As you might guess, the commodity winner is…GOLD.  The yellow metal has gained more than 16% from January with performances never seen since 2012.  However, momentum in the markets strongly relies on the moves of big players such as China and India, gold imports from the Asian market dropped by one fifth from last year and Asian countries are probably waiting for the consolidation of gold price to boost demand. And, what about investors? Gold ETF demand increased in respect to previous years and according to Bloomberg, investors are holding gold backed ETF at levels never seen since Sept 2014. Presumably, The FED policy, which is still not clear for investors, led them to buy risk free assets such as US Treasury Bonds and high valued commodities.

However, the gold rise might not last for long and the trend can shift downward even in few months. Indeed, historically the price of gold is inversely correlated to the price of dollars and an increase in the FED interest rates can push investors to buy bonds rather than commodities. It seems that gold price is only in the hand of the Federal Reserve but this is not the end of the story.  According to FT the gold rise is also affected by the mine supply. Gold production in some countries such as Australia increased hitting one year high. Furthermore, the fear of a Brexit is jeopardizing the stability of the Pound, which is currently the fourth most traded currency in the world.  Short positions on the pounds and British Government bonds most probably translate in long position on Treasuries and Gold. 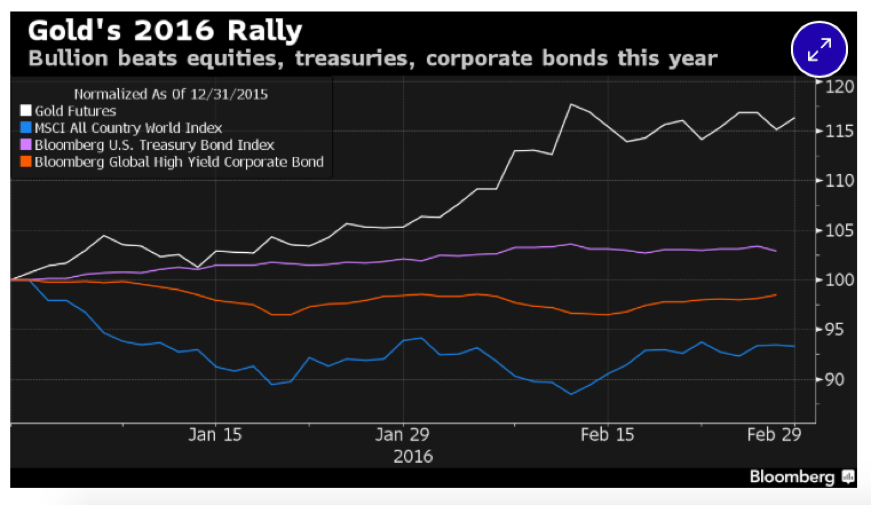 The Financial Times wrote an interesting quotes by Simon Derrik, a BNY Mellon market strategist: “ if you are sceptical about where the central banks are going, you buy gold”. As you can see from the graph above gold is inversely correlated to the MSCI Country World index, which captures large and mid cap representation across 23 Developed Markets countries. However, the world economy seems in the way to recover. Although financial markets worldwide experienced huge losses from the start of the year, new events such as the agreement to reduce oil output and the shy European and Asian recovery might push the economy back to potential. Perhaps in few months, Gold would return to be the old fashionable boring commodity with a stable price and relatively low risk.