Probably if you ask to your grandparents where to invest safely money, they will cite for sure gold in their answer.
“I have bought a great quantity of gold last year and I am still happy. In general I think a scarce resource will always acquire value over time; especially now with the presence of several treasury bond (e.g. Germany, Japan Switzerland) offering negative yields, investors could see in gold the last safe haven” Armando Beninati (Astor Sim) said Monday.

In a note issued Friday, the German Bank said economic signs are pointing in gold's favour.
"A bit like insurance, which is often a grudge purchase for many, some investors may balk at the current levels," it said. "We would, however, argue that given the plethora of negative deposit rates globally, the holding cost of gold is now negligible in many jurisdictions, and therefore gold deserves to be trading at elevated levels versus many other assets."
"We think the (economic) risks are to the downside. Gold has tended to underperform in an environment of strong global growth, so whilst not an outright tailwind, slowing growth certainly eases the pressure on gold," it said in the note. 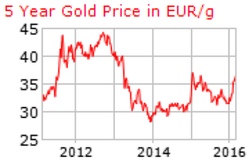 Deutsche Bank had previously expected gold would fall below the $1,000 an ounce level by the fourth quarter of this year as the U.S. Federal Reserve increased interest rates. But instead of three interest rate hikes this year, Deutsche Bank has since said it expects the Fed to be on hold for longer, anticipating only one rate increase in 2016 amid a contraction in the factory sector, which threatens to spill into the services sector.
​
It now expects that the fourth quarter of 2015 marked the lows for gold prices. In its note Friday, the bank said it raised its forecast for the fourth quarter of this year by 26 percent to $1,230 an ounce. Gold for March delivery was trading at $1,238.90 an ounce at 14:30 SIN/HK time.

Nobody could tell us when it will be the most profitable time span to sell but Beninati replicate again smiling: “the best moment to sell is when the others buy”.