​The HP – Autonomy case: how Deloitte might have caused HP to lose billions

It was September 2011 when Hewlett-Packard's CEO Leo Apotheker agreed to acquire Autonomy, a British software company, for around $10.3 billion (£6.7 billion). The market pressure at the time forced HP to rush the deal as the company was dealing with a falling stock price and outstanding performance from its main competitors (IBM above all). This led to the acquisition for an astonishingly high 64% premium over the prior day’s stock price.

Investors were skeptical of the acquisition from the beginning, and in hindsight the market had correctly anticipated that the deal was not going to create value for the acquirer’s shareholders. Indeed, the year following the acquisition was full of turmoil for both HP and Autonomy: the software company’s results failed to meet expectations and culture clashes between the huge and bureaucratic HP and the agile target arose. Finally, on November 20, 2012, HP announced that it was writing off $8.8 billion of the original $11 billion investment in Autonomy, recognizing the first net loss in 15 years. 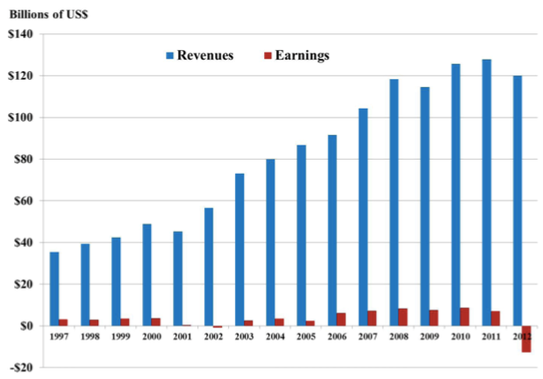 The write-off triggered one of the biggest accounting scandals in British corporate history: Meg Whitman, former CEO of HP, accused Autonomy’s founder and CEO at the time of the deal Mike Lynch of making false statements to investors about Autonomy’s performance ahead of the sale. In particular, HP alleged that Lynch, together with his finance director Sushovan Hussain, was behind a fraudulent manipulation of the software company’s accounts which led to HP paying an extra $5bn. Last year, Hussain was sentenced to five years in prison in the US for accounting fraud whereas Mr. Lynch is facing 17 charges of securities and wire fraud.

The independent accounting advisor for the deal was Deloitte, and HP relied on KPMG for the audits of the independent advisor. Inevitably, after the scandal broke out regulators began to investigate Deloitte and recently the Financial Reporting Council said Richard Knights, the former Deloitte partner in charge of auditing Autonomy, “consciously lost his objectivity” during a five-year relationship with the FTSE 100 company, and was “reckless” and “seriously misleading” in reports to regulators.

On Thursday, October the 10th, the eight-week tribunal in which the FRC is bringing disciplinary proceedings against Deloitte finally begun. The prosecutors claimed Deloitte failed to challenge the company’s disclosure in relation to its treatment of reseller contracts, which resulted in a misleading picture of fast-growing revenues from profitable software sales.

The FRC has claimed Autonomy was actually incurring significant losses on sales of its hardware, inappropriately hiding them among sales and marketing costs. The fact that Autonomy was the most important client of the Deloitte office where the auditors worked clearly jeopardizes their independence and leads to believe that the auditing company was not skeptic enough over management’s accounts.

On the other hand, Deloitte defended its position in court papers saying that its alleged lack of objectivity had been “brought on the flimsiest of bases”. In particular, as regards the channel stuffing Autonomy has been accused of, Deloitte also said that its work “clearly demonstrated appropriate professional skepticism” and that it “diligently and properly evaluated the manner in which the costs of the lossmaking hardware sales were allocated.”

Finally, HP is also suing Lynch and Hussain for $5bn damages through the civil courts in London. The trial is currently underway.