The incredible growth of the Jamaican Stock Market

The Jamaican Stock Market has been one of the best performer stock indexes in 2019. Its performance is even more impressive if we look over the last five years, with capital gains above 500%. But what are the reasons behind this incredible stock market boom? How was it possible for a market with a total capitalization smaller than the one of Chipotle Mexican Grill Inc. to become one of the hottest markets in the world?

​The Jamaican case
​Generally speaking, 2019 has been an excellent year for stock markets. For instance, the S&P500 recently touched a new high above 3000 points, gaining 21.2% since the beginning of the year. Similarly, the Nasdaq 100 is at record levels above 8100 points, up 28.1% from the end of 2018. In the same period, the MSCI World increased by 18.4%. All these performances are impressive, but there is a new entry in the list of the best performers, a stock market that you would not expect to see in such a list. Indeed, for most of 2019, the best performer has been the Jamaican Stock market, with a 29.06% return since the beginning of the year, despite a recent downturn of the market in the last weeks (the stock index lost around 1.9% during the previous 10 days), with the maximum peak achieved in August (above 40%). The analysis becomes even more interesting if we consider the performance of this stock market over the last few years. The market rose by more than 588% since October 2014. To put it in perspective, in the same period, the S&P500 rose “only” by 57%. So, what are the reasons behind this incredible performance? 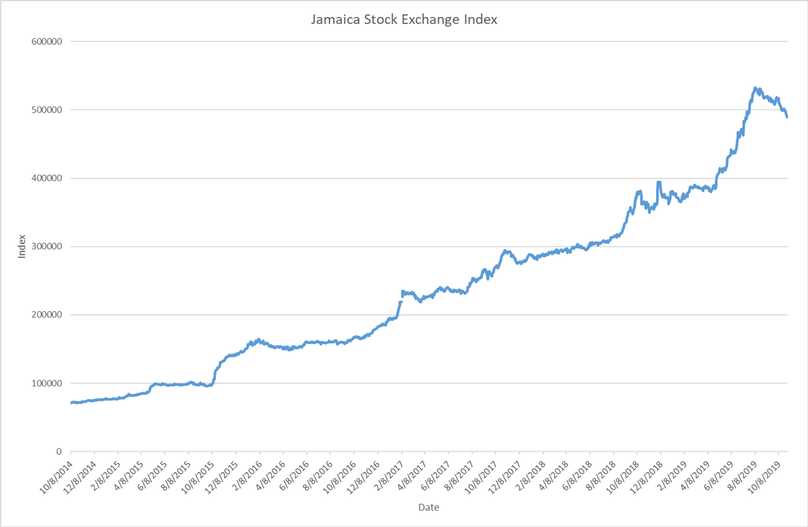 ​The stock exchange’s structure and short sellingThe first point that should be stressed is that the Jamaican stock market is still very rudimental and much different from what we see in New York or London. To name a few of the peculiar things that happen in Kingston, the trading session lasts only three hours and a half, without any premarket or after-hours session. Volumes are shallow and there are only 37 stocks listed on the main index. It is not rare to see shares not being traded for days.
Moreover, the market is not deep at all, with the total market capitalization being around $11 billion (smaller than Chipotle Mexican Grill Inc.) and the average volume per day was approximately $9.2 million in 2019. The lack of liquidity is even more exacerbated by the fact that many stocks are owned by conglomerates, meaning that only a little fraction of the total ownership is left to the public. Given this brief description, the absence of high-frequency traders is not a surprise. Last but not least, this market has another peculiar feature: on the Jamaican stock exchange, it is not possible to short sell stocks. This may have been an essential driver in pushing prices up. However, short selling is often seen as an important tool to avoid price bubbles, and this is why people in charge of the exchange are already working to address these issues. The exchange’s managing director, Marlene Street Forrest, is planning to introduce margin accounts, a fundamental tool to allow market participants to borrow money to short stocks. Secondly, Marlene is working to establish a market-making mechanism by the end of 2019: this system is likely to enhance the liquidity considerably in the market because it will guarantee a ready buyer and seller for stocks. This reform may eventually have a positive impact on the stocks’ valuation, given that liquidity risk may be reduced.

A minuscule stock market and the factors beyond the growth
There is a government-coordinated effort to transform Kingston into a Caribbean financial hub and strengthen the role of the nation in this region. According to the World Bank, in a few years, Jamaica has become the sixth-best nation in terms of ease to start a business. These efforts are one of the fundamental factors behind the stock market rally: they attracted new capitals and, trivially, just a tiny investment is needed to make such a minuscule stock market booming. Capitals flew to the island also thanks to relatively favorable economic conditions, such as record-low unemployment at 7.8% in 2019, inflation at 4% over the last five years (it used to be around 9%) and the $15.718 billion GDP expected to grow by 1.9% in 2019. Nevertheless, these figures are not enough to justify such a boom in the stock market.
If debt yields less, then stocks become attractiveThe Jamaican economy has not always been that good. In particular, public finances have often been a significant source of concern for the local government. Things started getting doom after the financial crisis of 2008. Given the consequent deterioration of the global economy, the Jamaican economy was particularly hurt by the sudden slow-down in tourism, foreign remittances, and exports of bauxite and alumina. Things escalated quickly: the country’s debt was downgraded, the Jamaican dollar plunged and investors demanded higher interests to hold bonds denominated in such a currency. Consequently, short-term government bills arrived to yield 25%. In the worst moments of the crisis, public debt reached 147% of GDP and a third of the fiscal budget was used to pay interests. On the one hand, interest expenses drained resources from infrastructure projects and welfare, on the other, government debt paid such a high yield that it was very difficult for local companies to raise funds issuing debt. The country was forced to turn to the IMF. The fund worked out a debt exchange: since a haircut on the principal would have resulted in a loss for the already weakened Jamaican banks, old bonds were exchanged for new ones with longer maturity and lower interest rates. After the implementation of many other austerity measures, public finances are now under control and debt/GDP has decreased to below 100%.
Apparently, the dynamics in the bonds’ market played a fundamental role in the stock market rally. Indeed, the reduced supply of bonds, together with lower interest rates, boosted confidence in the Jamaican economy and investors started searching for Jamaican dollars’ denominated securities with higher yields and thus bought equities. If, for years, the typical way to invest in Jamaica has been through debt, now, given such a low yield environment, investors turned to “risk-off mode” and started investing in equities, causing the stock market boom. 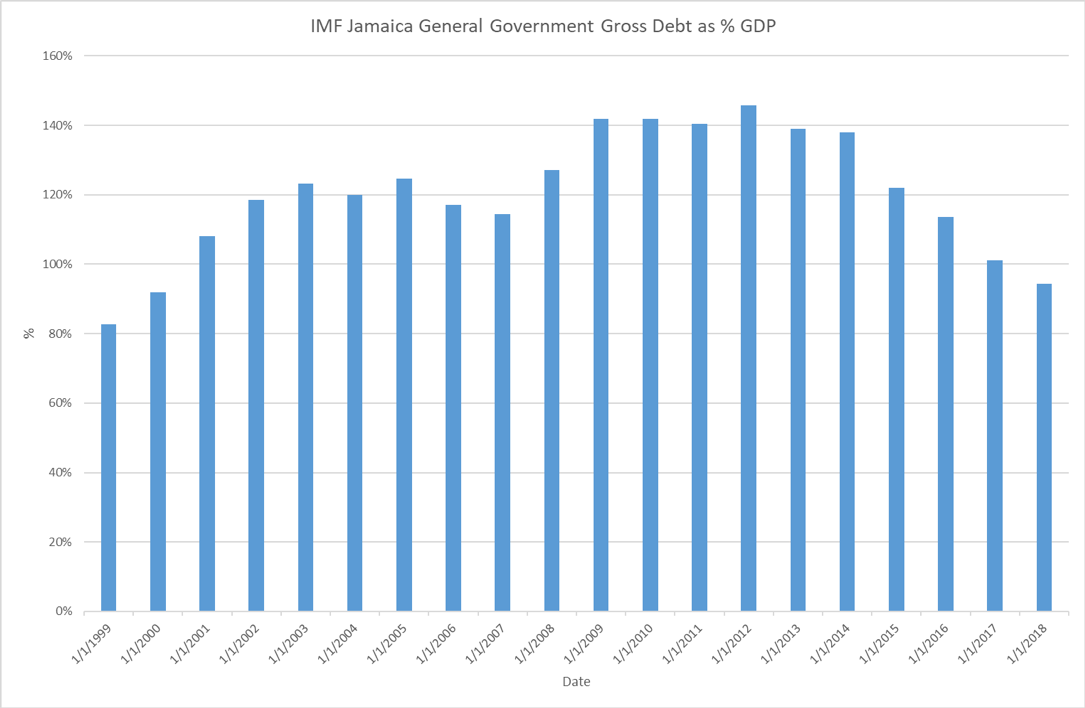 Some skepticism remains
The Jamaican stock exchange had an incredible performance over the last five years. However, there is no certainty whether this path is going to be sustainable in the future. So far, the real economy is still growing at a modest rate and the stock market boom seems to be due mostly to technical reasons (the absence of short selling, small market size, lower demand for bonds). For example, analyzing the performance of the Jamaican stock exchange in US dollar terms, the increase remains impressive. Still, the magnitude is lower: stocks raised by 20% in 2019 (topping at more than 30% in august) and by 462% in the last five years. Currency risk is a big deal for investors investing in Jamaica and, according to Sterling Asset Management, $1 million of Jamaican currency in 1974 would now be worth more than $8,000. In 2019, the Jamaican dollar lost 7.22% against the US dollar, 22.24% in the last five years. Finally, Jamaica remains a country characterized by high levels of crime and corruption: according to the U.S. State Department, it has the fifth-highest homicide rate in the world, 60 per 100,000 people and its economy remains dependent on weather conditions.
For how long is Jamaica going to sustain such an impressive performance?