​The largest oil supply cut agreement in history was not enough

On Sunday 12th April 2020, the U.S, Saudi Arabia and Russia led a coalition of 23 countries to reach a historic agreement to stabilize the oil market, by collectively cutting crude oil production by 9.7 million barrels a day. The global settlement put an end to the 2020 oil price war and represents the largest oil supply cut in history, withholding more than 13% of crude production from the market.  However, despite the remarkable deal, the reduction was not enough to guarantee sustainable support to prices and on Monday 20th April 2020 the price of  a barrel of  the US benchmark, West Texas Intermediate crude, to be delivered in May dropped into negative territory for the first time in history after oil storage capacity reached its limit.

2020 Oil Price War
The Coronavirus outbreak has forced businesses to reduce their frenetic pace, factories have had to shrink production and travel restrictions have severely impacted transports and movements. A combination of those factors has brought demand for oil to significantly lower levels and consequently prices to fall. 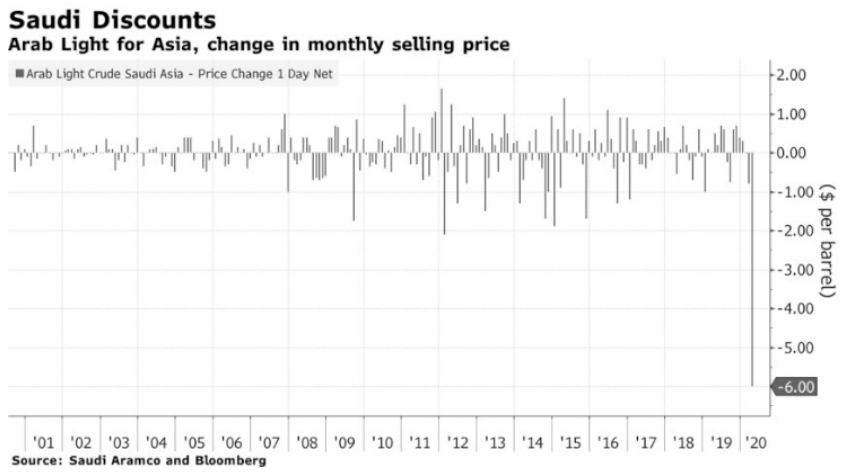 Source: Bloomberg and Saudi Aramco
The oil market turmoil began on 6th March 2020, when Russian Energy Minister Alexander Novak declared that his country was going to increase oil supply in April, just after Saudi Arabia representatives stated they were willing to slightly reduce oil production to balance the lower market demand. As a consequence, on March 8, Saudi Arabia initiated a price war by offering a huge discount of $6 per barrel and declaring a 25% increase in output production. What followed was the most turbulent period in petrol history. Since the beginning of March, oil prices have tumbled to their lowest level, with West Texas Intermediate, the US benchmark, closing on Monday at -$37.63, after a sharp selloff due storage capacity reaching its limit.

The Final Deal
After a series of uncertain and tight virtual meetings, global oil producers finally reached an agreement on Sunday 12th April 2020. Saudi Arabia, Russia and the US led a global coalition to favor coordinated oil supply cuts after the dramatic fall in demand. King Salman, President Putin and President Trump sealed the agreement on Sunday and after a rough week of deals and arrangements, they finally ended the oil price war. Despite Mexico’s hesitation to curb the required amount of production on Friday 10th, President Trump stepped in to make sure the deal would reach the finish line and offered Mexico help by pledging for a portion of the oil production they were not willing to cut. The 23 countries involved in the transaction concurred to suppress 9.7 million barrels of oil a day, despite the majority of experts warning it would not be enough to contrast the fall in demand. 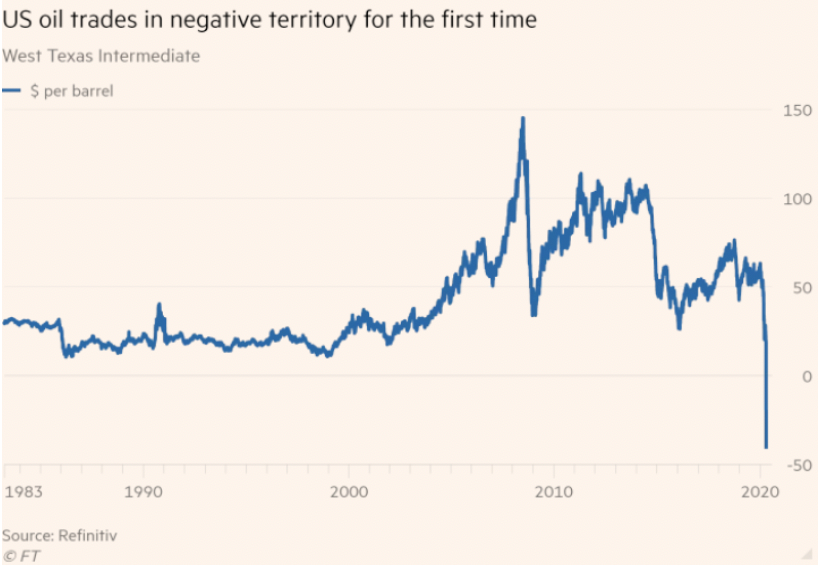 Source: Refinitiv
At first, the oil agreement, that managed to coordinate global supply, was seen as a diplomatic win by the Trump administration. Despite President Trump being a notorious opponent of the OPEC cartel, this time he was forced to intervene to protect thousands of jobs and oil companies from worrying prospects. The US had a crucial coordinating role at stopping the damaging price war initiated by Russia and Saudi Arabia by obtaining international cooperation, but it failed to achieve the main target of avoiding the oil market collapse.

It was not enough
The oil supply cut was a necessary action required by the extraordinary global circumstances. The market reaction following the oil supply agreement was initially an encouraging sign that the oil price war between Saudi Arabia and Russia had finally reached an end. However, it was quickly followed by global market concerns that the largest oil cut in history might not be sufficient to counter the tremendous upcoming recession. Most trustworthy predictions foresaw a probable 30% fall in oil demand that would likely imply that the recent oil deal had still not reached a conclusion but would need further adjustments to comply with market reactions. What followed on Monday 20th April was the deepest fall in the US benchmark, with WTI crude to be delivered in may depreciating by approximately 300% in a single trading day after rumors of crude storage capacity reaching the limit.
On Tuesday 14th April, Gita Gopinath, IMF’s chief economist, warned that the crisis would leave permanent wounds on the worldwide economy, stating many countries will experience a level of GDP that “will remain below the pre-virus trend, with considerable uncertainty about the strength of the rebound”. It is clear oil prices and production will depend on the recovery speed of the world economy once it leaves lockdown measures that are momentarily freezing international trade. Even though the deal was a failure in terms of numbers, it embodied a symbolic swing in global petroleum politics. King Salman, Putin and Trump, as leaders of the top 3 producers, are commanding oil supply and would likely virtually meet in the next days to renegotiate the agreement.