The moment of truth is coming for Monte dei Paschi

Banca Monte dei Paschi di Siena is to cut 2,600 jobs in the latest plan to return to profitability and achieve the CEO Marco Morelli’s target of €1.1bn net income and 11% return on tangible equity by the end of 2019. The announcement caused speculation in the market about the bank’s restructuration process: the shares gained 31% before facing a significant drop the day after. 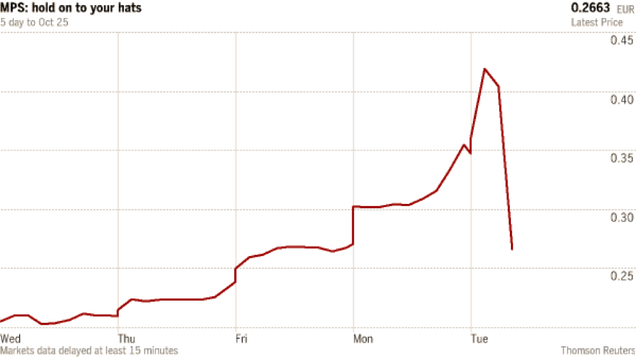 The bank has been under the radar since it was the worst performer in the July’s stress tests undertaken by the ECB, mostly because of almost €30bn in non-performing loans (NPLs), and since the new appointed CEO is now trying to persuade the markets about his program.  The restructuration process necessarily has to go through the sale of the NPLs and a recapitalization of €5bn.

Regarding the former, MPS is working on a maxi-securitization of the loans for a net value of about €10bn (33% of the gross value) with JP Morgan as advisor: the American bank will also provide a bridge loan to allow MPS to immediately get rid of the NPLs.
Concerning the latter, Mr. Morelli confirmed that the first step would be a voluntary debt to equity swap undertaken by the bank, which will allow MPS to rise €1bn to €2bn. He is also seeking for investors to back up his plan to raise funds and avoid a bail in from the bank‘s debt holders through the issue of new share both to existing shareholders and new investors, including People’s Bank of China and the sovereign funds of Qatar and Kuwait.

Moreover, Mr. Morelli said he is also considering the recapitalization proposal presented by Corrado Passera, former head of Intesa San Paolo. It consists on a €1bn share sale to existing investors and a €2.5bn from new long-term investors, including Atlas Merchant Capital, the investment vehicle of former Barclays boss Bob Diamond, which is in contrast with the plan Jamie Dimon and Italian Prime Minister Mr. Renzi agreed on this summer.
​
As a matter of fact, the PM hopes to avoid the bank to face a bail in, which would mean losses for thousands of retail investors just a few weeks before the referendum over the constitutional reform.

Either way, the recapitalization of Monte dei Paschi is a great deal of importance for the Italian bank system as a whole: a failure of both JPM’s and Mr. Passera‘s plans could have indirect consequences in the Italian financial market, starting with the expected Unicredit’s raise of capital next year.