The new fashion in the world of Fintech: Buy Now Pay Later

The combination of the recent surge in prices, together with the accelerated growth of online shopping, has paved the way for the expanding popularity among consumers of Buy Now Pay Later purchasing options. While these services may allow some consumers to improve the management of their finances, they also expose the public to a number of risks. In this article, we have provided an outlook on this emerging industry, with a specific focus on two of the leading firms, namely Afterpay and Affirm, in addition to an analysis of the possible risks that BNPL brings.
​

What is Buy Now Pay Later?

The recent surge in prices, which has seen a rise in the October's consumer price index of 6.2% year-over-year, has led the public to search for ways to stretch their money flows over larger periods of time. In addition, the outbreak of the pandemic has caused an accelerated growth of online shopping: according to WorldPay consumers have spent $4.6 trillion on global e-commerce in 2020. The combination of these two elements has fueled the spectacular increase in popularity of Buy Now Pay Later (BNPL) services.
Firms such as Afterpay, Affirm, Klarna and Zip offer the ability to extend payments over a short period of time, usually two to three months, instead of paying retailers directly. They provide customers with interest-free installment plans that are revolutionizing the traditional credit card business. Some firms also include longer-term plans, which do carry interest.
BNPL services provide the public with purchasing options that are different from personal loans, which are usually designed for bigger amounts and have larger maturities.
Thanks to the Buy Now Pay Later system, customers that don't have the necessary credit history to access loans or to qualify for 0% financing on their credit card expenses, are allowed to obtain new funds, as the leading firms in the industry rely on their private algorithms to determine a borrower's ability to repay.
While BNPL may have increased the flexibility of payments, there are some risks that must be taken into account. The amount of debt taken out by consumers has significantly increased, with already a third of users that have reportedly admitted having fallen behind in at least one payment. However, BNPL companies claim their services to be safer than traditional credit cards, as they approve each transaction by underwriting it individually, which gives them a lot more control on their credit exposure.
Buy Now Pay Later has been a disruptive force in the payments business, and the potentiality for its future integration are enormous, but customers have to bear in mind that it’s simply another form of debt, which presents the possibility of better managing their finances or incurring hefty penalties for taking out excessive funds.
​ 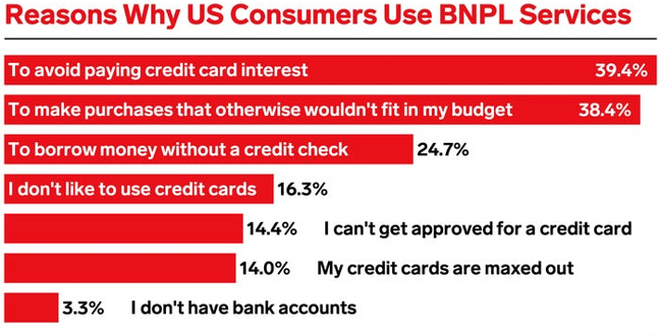 Buy Now Pay Later accounted for 2.1% of global e-commerce spending in 2020, a $97B business, and the number of merchants entering new partnerships with BNPL platforms is constantly increasing. The global market size is expected to reach $20.4B by 2028, following a CAGR of 22.4% between 2021-2028.
Affirm already has more than 102,000 merchant partnerships, as retailers are starting to consider deferred payments as a key part of their future business plans.
The recent announcements of Affirm partnership with Amazon and Apple, together with Square's acquisition of Afterpay in a $29B deal, demonstrate how the growth of this market is just getting started.
Europe is the leading market in the adoption of BNPL payment options; in particular, Sweden, the home of Klarna, where more than 23% of e-commerce transactions are done through those services, followed by Germany at 19% and the UK at 5%, with more than 10 million customers using the service over the last 12 months. Overall, Affirm and Afterpay have reported more than 8.7 and 16.2 million users, respectively.
​ 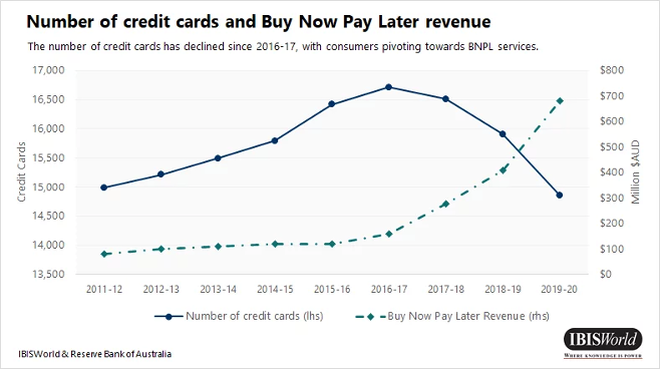 Research has proven that, as far as consumers are concerned, one of the best shopping experiences that a seller can offer to its customers is the ability to pay after receiving the product. Afterpay is one of the most popular deferred payment solutions in the Netherlands and Belgium and enables customers to place their orders in the online store and then pay for their products.
Afterpay was designed primarily for the customer and to increase the conversion rate of the store. It has been shown that consumers buy an average of 20% more via Afterpay. As a consequence, deferred payments over time are spreading and, moreover, flexible payment services could increase consumer confidence in online payments.
Among the many solutions available, Afterpay is a digital payment platform listed on the Australian stock market with over a million customers worldwide, offering deferred payment solutions up to 8 weeks.
The rapid growth of Afterpay represents a "plus" for merchants. Taking into account that every modern buyer needs a better way to pay, the platform manages to meet the smart needs of Millennials, who have a spending power of $200 billion.
Additionally, buyers are looking for a viable alternative to credit and the freedom to buy and pay on time without interest.
For commercial merchants, offering among the After Pay payment solutions represents an added value and a "plus" to displace the competition.

How it works:
With After Pay you divide your purchase into 4 equal installments: pay your purchase every two weeks. The first instalment is paid at the time of purchase and the remaining debt is for the rest of the time until the time of completion of the purchase.
The deferred payment is zero interest and no additional fees are required. The only fees are charged for late payments. The payment schedule is sent by email to the buyer, including notifications so that you have no surprises.

Affirm is an alternative to credit cards and other credit payment systems. Affirm offers instant financing for online purchases that allows you to defer payment in fixed monthly installments for periods of 3, 6 or, 12 months. The company offers low-interest rates on consumer loans at the point of sale, allowing the customer to buy what they want now and pay later. Affirm allows you to refinance your loans in multiple monthly installments. Consumers who finance their purchases using Affirm can use credit without additional fees and without registration fees or down payments.

How it works:
Affirm pays the seller for your purchases and buys your debt. Some retailers offer a 0% APRC when paying with this loan provider, but Affirm’s rates generally vary from 10% to 30% APR. The other end of this step is to prove your eligibility to pay for the loan that Affirm is going to grant you. If you already have an Affirm account and are pre-qualified, you can proceed with the payment of your purchase with Affirm.
Some purchases may require payment of a portion of the cost of the product before the loan is approved. After successfully purchasing with Affirm, you will receive the first reminder to make payments in about a month. Lastly, Affirm loans are generally short-term, extending for a maximum of one year. You can pay off your loans in three monthly payments, six-monthly payments, or twelve monthly payments.

Affirm Holdings (NASDAQ:AFRM) soared to Wall Street after announcing a partnership with Amazon that will allow users of the e-commerce giant to pay in installments purchases over $50. The new service, for now, will be available only for selected customers in the United States, but the two companies are already thinking of a wider expansion in the coming months. The deal with Amazon did well for Affirm, whose shares jumped 33% when the deal was announced and the rally continued today after a few days, on August 30th, with the title that marked +40% in Wall Street.

In the UK the BNPL industry was estimated to have financed £3 billion in customer transactions in the past 5 years. FCA wants to impose more regulations to protect consumers. Indeed, BNPL providers have operated with relatively limited oversight. But now that the use of this system of payment has become relevant many experts think that the industry must undergo greater regulation.
The first point of concern concerns the prime target of these companies that are millennials and Gen Zers. According to Mc Kinsey, clients tend to spend more per purchase when they use BNPL. The point is that younger generations have more problems in making responsible purchases in line with their affordability and a payment system that encourages customers to spend more certainly does not make it easier. Ted Rossman, senior industry analyst at Bankrate.com, points out how over-reliance on BNPL is dangerous: “If you overspend, pay late. and rely too much on it, Buy Now Pay Later could be bad”. Basically, BNPL could induce customers to spend more they can afford.  And this is true not only for younger generations but also for the older ones. Sue Anderson of debt charity StepChange emphasises this aspect stating that: "Buy now, pay later services don't give individuals enough time or protection to stop, pause and understand the consequences of their purchase. Sometimes this even means people end up using BNPL at the online checkout without actually realizing they have signed up.”

Another aspect that is causing concern is related to the credit-control BNPL players do before granting the installment loan. Basically, the customer is subject to a soft credit check. A soft credit check is an inquiry that does not affect a customer's credit score. However since this market is not very regulated, according to critics some people are able to obtain credit that they would not be able to take out in other ways. This could lead to an environment in which people have debts that do not match their profile in terms of being able to meet their commitments. This consideration was made by Rebecca Borné, senior policy counsel with consumer advocacy group Center for Responsible Lending, in an interview for NBC news.
Even more, BNPL has made it harder to assess how much debt consumers are actually shouldering and carry out effective affordability checks. Indeed, the soft credit check discussed previously is not visible to other lenders. This means that a consumer could use several BNPL platforms at the same time and greatly increase its debt.

It is always important to go over appearances and look at what happens with a critical eye. Buy now pay later has huge potentialities and could be an opportunity if used responsibly but we need “more data and oversight” as Borné suggests. Regulators are called upon to take responsibility for regulating this sector.
​