On Monday 15th of April, Notre-Dame cathedral, one of the most iconic symbols of history in Paris was torched because of a short-circuit or negligence by workers carrying out renovations through cigarette butts. Donald Tusk, the President of the European Union (EU) Council, called upon EU members to help with the rebuilding. Within 8 days only, the total money raised reached €900 million.

What has been most moving is the French billionaires’ donations. François-Henri Pinault, the ultimate owner of Gucci and Yves Saint Laurent donated €100 million, the Arnault family gave €200 million followed by another €200 million from the Bettencourt Meyers family and €100 million from Total. According to Bloomberg Billionaires Index, the amounts mentioned above represent less than 1% of the sum of these fortunes. However, these donations have raised several critics arguing about inequality. Ollivier Pourriol, a French philosopher and novelist said: “...Victor Hugo thanks all the generous donors ready to save Notre Dame and proposes that they do the same thing with Les Misérables…”.

The main critics to the wealthy donors focus on taxes: it is believed that tax rates should increase for corporations and the extremely wealthy. First, let’s have a look to France’s taxation system. 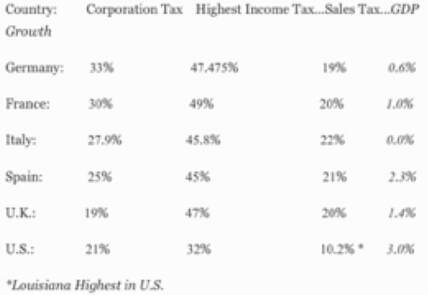 By looking at these metrics, we can notice that France already has some of the highest income tax rates in the world. Nations that are growing faster than France have lower tax rates. For instance, the corporation tax rate in France is 30 percent, which is 9 percentage points higher than that in the US, while the GDP growth rate in France is 2 percentage points lower than in the United States. This explains why many wealthy individuals have taken their money elsewhere. Therefore, according to a study from the research group New World Wealth, in 2018 about 3000 individuals left the country or began to live there for less than half a year in order to avoid high tax rates. Nonetheless, with the implementation of the Loi Aillagon in 2003, charitable donations in France normally benefit from a 60 percent tax deductibility for companies and 66 percent for individuals. This means that for every corporate gift of €100 million, the state doesn’t receive €60 million in taxes. The total amount of sponsorship benefiting from these exemptions has increased from €1 billion in 2004 to nearly €4 billion at the time of writing.

In order to promote donations, the French government said it will present a draft law to Parliament that includes a specific tax incentive measure. Prime Minister, Edouard Philippe, suggested the measure won’t target big corporations or wealthy individual donations but he stated that “those who donate up to €1,000 for reconstruction of the cathedral will get a 75 percent reduction”, while the others will follow the current law. This is the result of the several accusations that the government received regarding the favouritism of corporate entities and big investors over working people. As a consequence, Pinault said he would not be seeking any tax breaks regarding his donation.

To conclude, the issue remains central on whether these generous donations have been made because donors had at heart one of the main French monuments or because of the tax optimization.