​The prospects of Natural Gas and the hidden player to watch

Background on shale gas
Shale is a fine-grained sedimentary rock that forms when silt and clay-size mineral particles are compacted, and it is easily broken into thin, parallel layers. Black shale contains organic material that can generate oil and natural gas, which is trapped within the rock's pores.

US shale gas production has multiplied in recent years as the natural gas industry has improved drilling and extraction methods while increasing exploration efforts. Driven by new applications of hydraulic fracturing technology and horizontal drilling, development of unique sources of shale gas has compensated declines in production from conventional gas reservoirs and has led to significant increases in reserves of US natural gas. Shale production is projected to increase from 23% of total US gas production in 2010 to 49% by 2035. The availability of vast shale gas reserves in the US has driven some to suggest natural gas-fired power plants as lower-carbon emission replacements for coal plants, and as backup power sources for wind energy.

What is going on with Natural Gas?
US Natural Gas prices rose 18% last Wednesday (the largest one-day gain in eight years) as the start of winter stress-tests the ability of shale gas production to supply the country over the coming months. The rise suggests concerns that winter heating demand may draw heavily on stocks of US gas in storage that now remain at 3.2tn cubic feet, the lowest in more than a decade for the start of the winter. Meteorologists have renewed projections to predict a colder than usual December, and freezing temperatures are already gripping parts of the country. 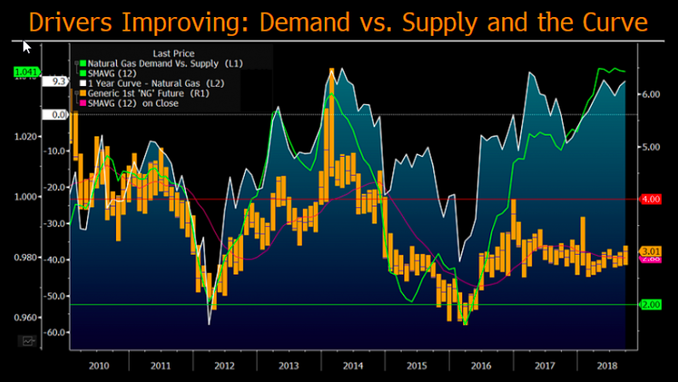 Source: Bloomberg
Keep in mind that residential and commercial uses account for over a third of US natural gas consumption, as gas is utilized in homes for space and water heating and for cooking. About half of all

US homes used natural gas for heating in 2017 and 70 percent of all new homes are constructed with gas heating systems.

A sweltering summer has led to heavy use of gas (electricity production for A/C units), preventing a rapid replenishment of reserves during what is known as the “injection season.”  A significant source of US natural gas comes from wells drilled for oil in regions such as the Permian Basin of Texas and New Mexico. A lower oil price could lead to less incentive for drilling, potentially limiting growth in so-called “associated gas” production - not great news.

On top of that, Natural Gas has been in a bear market due to the huge over-supply that was once present and this often leads to bull markets spurred by shortages, which is what we are seeing today. The shale production growth in the U.S is mainly generated by the Appalachian Region (Marcellus &  Utica Shales) and the Permian Region. These regions in total produce nearly 40% of America’s dry natural gas output, but they have together generated 100% of the growth since 2012. The irony is that despite all the growth, all the other conventional dry natural gas producing regions have seen their output fall by 25% since 2012. Moreover, the combined output of the Haynesville, Fayetteville, Barnett, Woodford, Eagle Ford and others has been capped for the past 6 years.

Source: EIA
As we can see from these graphs, growth has dramatically slowed, and with demand accelerating as countries switch to favoring Natural Gas it could be causing dangerous shortage situations. And according to 13D Research, an NY based research firm, with their 90% down rule they now say that Natural Gas has been on their radars.

What happened in gas markets?
The Daily 3x Long Natural Gas ETN (NYSEARCA:UGAZ) rose 37 percent, bringing its gain last week to 79 percent. Meanwhile, the United States Natural Gas Fund LP (NYSEARCA:UNG) surged 12 percent and is up 22 percent for last week. In the first 90 minutes of trading, almost 16 million shares of UNG worth $580 million changed hands, the most since 2014 and more than six times the average daily volume over the past 12 months.
​
Weather Models are spurring volatility
The weather is of course almost impossible to predict perfectly, but these days it is possible to estimate how cold or hot seasons will be. The fact is that these estimates rely on models, and when these models splurge data out, the Natural Gas markets listen and react. And the issue with this is that the two major models have displayed discrepancies in their predictions - leaving traders confused.

This could turn the Natural Gas play into much more of a gamble rather than a calculated risk/reward trade. Thus, traders less familiar with Natural Gas should steer clear of it as the volatility levels of this commodity is the reason why it has been named the “widowmaker”.

U.S Natural Gas player to watch: Chesapeake Energy
The company based out of Oklahoma is the second largest producer of Natural Gas in the U.S after Exxon Mobil, and the most active driller of new natural gas wells in continental U.S. The company has hedges on both WTI Crude Oil and Natural Gas via futures contracts, which have proven to be effective in the past month or so as we saw oil plunge from ~$75/pb to ~$49/pb. However, the company holds a substantial amount of debt on its book relatives to its size, which means a lot of the cash flow is of course eaten up to service it. And the latest announcement on their acquisition of WildHorse for $4bn (stock and cash deal) scared investors off despite strong results for Q3. This has led Chesapeake’s stock to slide below $3/share from the $4.5/share it was at halfway through Q3.

Even though the results proved to be somewhat positive in comparison to the previous years, the WildHorse acquisition put many off as the last thing investors wanted was a dilution in their shares and added debt.

Despite all these debt worries, Chesapeake should place an additional 15 wells in Q4 as well as 65-70 Turner wells to be ready for production in 2019 (along with a sixth rig). These capital additions should bode well for Chesapeake’s future cash flow profile.

Lastly, management was confident in the last earnings call and finished by saying that “(the company) continues to make significant progress on our strategic priorities, as demonstrated by our improved cash flow from operations, which was more than 50% higher than the 2017 Q3 due to higher average realised commodity prices and 13% growth in our adjusted oil production.”

Outlook
From analysed data, Natural Gas should continue to trend higher in the coming months leading up to and throughout winter. As shown in the analysis above, the industry is already struggling to keep up with the storage requirements. Moreover, with the growing effects of climate change becoming ever more prevalent, in the form of extreme weather, it is unlikely that the natural gas industry will be able to meet the increased demands in energy which the festive period brings along with it. Thus, I expect to see a sustained rise in the price of natural gas leading up to and throughout the winter period. Thus, the Natural Gas ETF products are especially interesting, and even more so when the position is hedged with Natural Gas put options with a trailing purchase date.