China’s currency, the renminbi, is at its lowest level since January 2017.  It is now trading at approximately 6.95 Rmb per US dollar, while just nine months ago it was trading at 6.3 Rmb per dollar, signing almost a 10% devaluation over that period.
It is a very discussed topic in the financial news because there is a great fear among investors that China’s currency will touch again the Rmb7 per US dollar, a level not observed since the financial crisis and marking an important psychological threshold for traders.

In this article we are going to see what are the main factors behind that devaluation, what are the advantages and the drawbacks China has from it and finally what are the possible future perspectives. 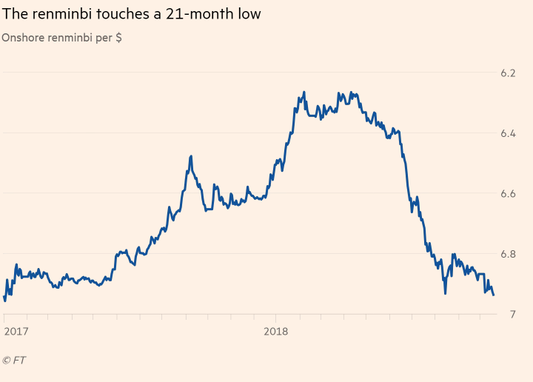 THE CAUSES OF THE FALL

It is not a coincidence that the sell-off started simultaneously with Trump’s declaration of new tariffs in June. Worries that the trade war will have a negative impact on China’s economy by reducing exports to the USA as well as Trump’s announcements stating that China is manipulating its currency had a strong impact on the yuan (or renminbi). However, we should not limit our analysis to the trade war and the strengthening dollar. It is a fact that the Chinese economy is slowing down and that its fundamentals are deteriorating, regardless of the global situation. This can be seen in various data. The country suffered its first current account deficit since 2001 and its economy grew at a rate of “only” by 6.5% during the third quarter, value below the expectations and the lowest since the financial crisis. Capital markets inflows have also decreased: they passed from $18bn in August to only $3bn in September. Even the USA, in the last report from the Treasury had to admit it: China is not manipulating the currency, its economic health is just changing. This is reflected in its currency’s performance.

DOES CHINA REALLY BENEFIT FROM A DEVALUATION?

The advantages and disadvantages China would have from a further currency devaluation are the classical ones studied in every macroeconomic class. Nevertheless, in this case the risk associated to a further depreciation are probably higher than the potential benefits.
In fact, if on one side, China benefits from a lower yuan through an increase of exports (as they become cheaper) and thus an improvement of its current account, on the other side a further depreciation would be counterproductive. Not only because  Chinese companies would suffer to paying back US currency-denominated debt, but also  because inflation, currently at 2.5%, is likely to increase and because China will lose much of its influence as a global economic power.
If the currency continues to depreciate at such a high rate, China would lose all of the efforts that took place during the last decade to turn the renminbi into an internationally recognized currency. Furthermore, this would also doom the Chinese long-lasting campaign centered on attracting foreign capital and “keep funds at home”.

Analyst at Capital Economics forecast Rmb to trade at 6.9 per US dollar at the end of this year and predict a further stabilization at around Rmb7 over the next period. China’s currency will is not expected to not devaluate much more for various reasons. First of all, Beijing is giving a strong stimulus to the Chinese economy: president Xi Jinping plan “Made in China 2025” is expected to boost Chinese domestic demand and Chinese have around $3.1tn stockpile of  in reserves, an amount large enough to support the currency for more than one year. Furthermore, the People Bank of China is aware that another sharp devaluation could possibly plunge the world into a deflationary disarray and the country, other than suffering the above-mentioned risks, could very probably be accused of currency manipulation. Thus, a further devaluation is very unlikely to happen. When I analysts say that the currency will stabilize, they are also assuming that very probably it will not appreciate soon. This is linked to the fact that the Chinese economy is entering into a new phase, different from the previous one and, some thinkI believe, irreversible.