The Resurgence of the Brazilian M&A Market: Suzano And Fibria Deal

The Brazilian M&A market is resurging, after a period of stagnation, thanks to a recent megadeal in the cellulose sector. Suzano Papel e Celulose has just concluded the takeover of its major competitor, Fibria Celulose, creating the world’s biggest producer of eucalyptus pulp, used as raw material to produce books, tissues and toilet rolls, among other things.

Suzano was founded in 1924 by the Feffer family, which still owns the majority of shares. BNDES, a Brazilian development bank, has a minority stake. Together with Votorantim Participações, the same bank is one of the controlling shareholders of Fibria through BNDESPar, its investment arm.

Paper Excellence, another pulp producer, tried to acquire Fibria before Suzano, without success. The Netherlands-based company is controlled by the Wijaya family, which also owns Asia Pulp & Paper Company Ltd. Paper Excellence acquired Eldorado Brasil Celulose SA last year for $4.7 billion. Fibria and Eldorado both have operations in the city of Três Lagoas, in the state of Mato Grosso do Sul. The decision to bid also for Fibria was subsequent to the news that the rival Suzano had started negotiation with the target. Paper excellence valued the deal 40 billion reais ($12.3 billion) and also offered a break-up fee of 4 billion reais, without additional guarantees. The company offered a simple cash transaction, in which shareholders would have the option to sell their stakes.

The rationale behind the acquisition is linked to the possibility of expansion of the acquirer. The merger of the two firms created a gigantic mega-group with a production capacity of around 10.8 million tons of bleached eucalyptus pulp and 1.3 million tons of paper and board. The company is now the biggest Brazilian company in agribusiness, representing a 17 per cent share of the pulp global market. “What we are doing here is not enhancing only the size of the company but enhancing the competitiveness of the company for the future”, Suzano CEO Walter Schalka said, valuing the synergies in the transaction $2.5-$3bn. The synergies will show in forest management, logistics, sales and administration and will include savings on international trade, thanks to the combination of the overseas inventories, as well as forests, with the combined group able to reconfigure their plantations to shorten the distance to their plants.

The deal is also significant for another reason: it boosted the dormant Brazilian market, which is now back in the global international M&A scene, thanks to the biggest takeover of a Brazilian target company in the country’s history, excluding state owned ones.

Indeed, the deal happened in a challenging context both from an economical and a political point of view. From the economical perspective, Brazilian market was a sleeping beauty who was looking forward to awakening, as previously commented. The country is expected to grow by 3% in 2018, against the 1% of 2017, due to the low interest rates environment. The political background is of particular interest, with October presidential elections still uncertain. Two populists are leading the preliminary polls: the former president Luiz Inácio Lula da Silva, who is currently in jail for corruption, representing the left, and Jair Bolsonaro, representing the extreme right. There are other minor potential candidates with tremendously different orientations: from Joaquim Barbosa, a black supreme court judge, to Geraldo Alckmin, the powerful center-right governor of the state of São Paulo. Whatever the result of the election, the next president will have to face the country's delicate fiscal position with restructuring reforms, which will influence the pension system and Brazilian economy in general. 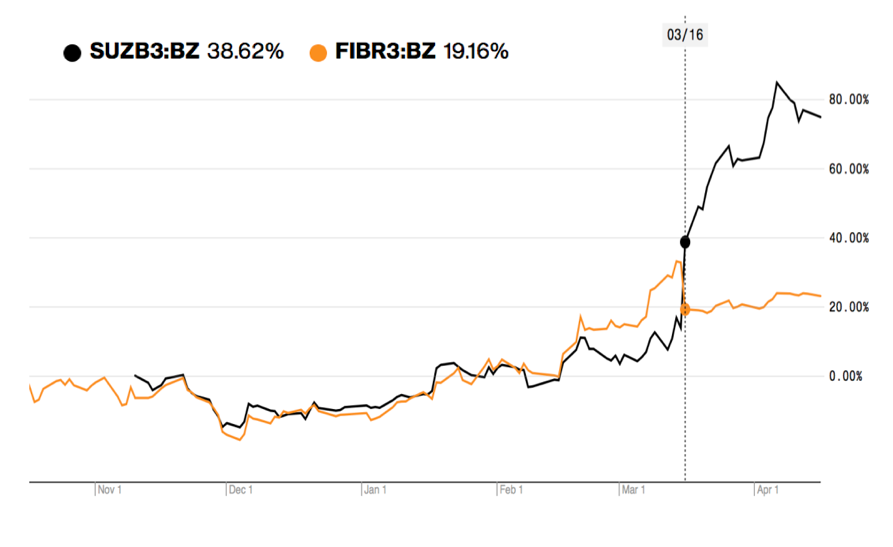 The deal is a $14.5bn takeover. It is a cash and stock merger in which Suzano offered 0.4611 shares plus cash of R$52.50 shares for every share of Fibria, with the possibility for some shareholders to exercise the option of exiting their stake and receiving cash. The dilution effect affected BNDES, which now owns 11.1%, and Votorantim, now holding 5.6% of the new company. A consortium of international banks — JPMorgan Chase, BNP Paribas, Mizuho Bank and Rabobank — provided $9.2bn in loans to Suzano for the purchase. The deal is subject to antitrust approval in Brazil, the United States, the European Union and China. If regulators force the sale of more than 1.1 million tons of capacity, an escape clause would allow Suzano to abandon the deal for a R$750mn fee.

The resulting company owns assets currently owned by Suzano and Fibria. Its market capitalization is of R$83bn, representing the biggest producer of pulp in the world. Suzano CEO’s plan is to deleverage the company, reaching a financial ratio Net Debt/EBITDA of about 3.5 by the end of the year and 2-3 times in the long term. The objective is not to expand capacity in the short term but to pursue future growth alternatives which mostly regard paper and consumer goods. Expansion projects are, however, suspended until leverage reaches the required value.

Suzano and Fibria was one of the top ten deal globally by size in the first quarter of 2018.  It is one of the first not linked to the country recession or to the corruption scandals that led the market in the last months, representing a stand-alone symbol of the importance of the Brazilian influence. It depicts the resurgence of the Brazilian market, that is likely to continue. There are, in fact, other interesting deals which are being launched and proposed and the IPO market is proving to be relevant and growing, thanks above all to the listing of PagSeguro Digital, a Brazilian payment company. The advice is therefore to follow the evolution of the Brazilian situation and to keep track of its future possible developments.