The rise of Inflation in Europe

The EU's real GDP increased by 5.3 percent in 2021, slightly exceeding its pre-pandemic level at the end of the year. The pace of growth slowed in the fourth quarter, owing to weak private consumption, which fell by 0.6 percent as a result of rising coronavirus (COVID-19) infections, as well as higher energy prices, which weighed on households' purchasing power. In the fourth quarter, net trade also had a negative impact on growth. Investment and public-sector consumption, on the other hand, contributed positively to economic growth. On the production side, the constant improvement in industrial production still shows supply bottlenecks, but it is gradually diminishing.

As a lot of barriers begin to subside in 2022, growth should accelerate. The predicted improvement is based on the COVID-19 pandemic's economic impact fading, ongoing favorable financing circumstances, and a strengthening labor market. However, the crisis in Ukraine is thought to have lowered spending plans in the near term, owing to its influence on energy costs and confidence, leading to projections of a worse second-quarter expansion. This view is reflected in the baseline scenario of the ECB staff macroeconomic estimates for the euro area released in March 2022. Annual real GDP growth is expected to be 3.7 percent in 2022, 2.8 percent in 2023, and 1.6 percent in 2024, according to the predictions.
The impact of the Ukraine crisis on energy prices and trading is mostly reflected in the 2022 revisions. With Russia's invasion of Ukraine, the risks to the economy have risen dramatically and are now skewed to the downside. While the probability of a pandemic has decreased, the war in Ukraine may have a greater impact on economic sentiment than expected, worsening supply-side limitations once more.
While the ECB's staff macroeconomic predictions show solid growth in economic activity over the medium term, the Russia-Ukraine conflict will have a significant impact on activity. Alternative scenarios that account for the war's economic impact show that higher increases in energy and commodity prices, as well as more severe impacts on trade and sentiment, could severely reduce growth.

In the 12 days after Russia invaded Ukraine, European markets have plummeted, upending forecasts on a return this year as investors become increasingly concerned that the conflict's fallout will stifle the region's economy. The beginning of conflict has sent shockwaves through Europe's stock markets, with the continent's Stoxx 600 index down 8% since the crisis began. Investors withdrew a record $6.7 billion from European stock funds last week, fearing that the accompanying rise in oil prices will hit consumers in a region largely reliant on energy imports and already dealing with the greatest inflation in decades. Furthermore, following concerns that a western oil embargo was being proposed, the selling accelerated, driving European gas prices to new highs.
"Europe is probably already in recession," said Pictet Asset Management's chief strategist, Luca Paolini. The decline in European stocks, which saw Germany's flagship Dax index enter a bear market this week after falling more than 20% from recent highs, contrasts with the US S&P 500, which has remained relatively unchanged over the same time period. 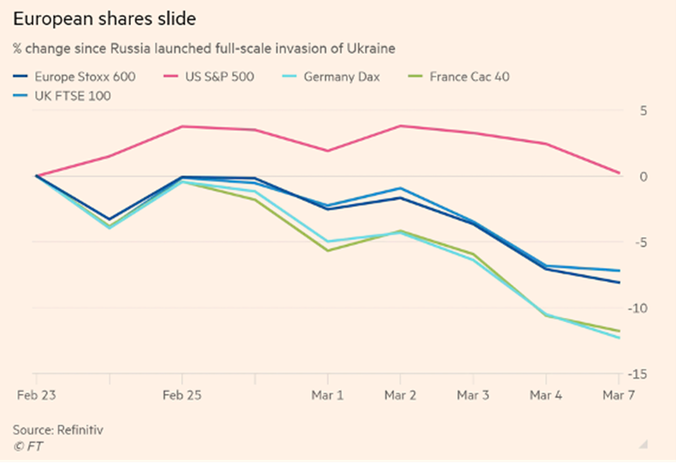 UBS Wealth Management has downgraded its outlook on eurozone stocks to neutral, indicating that it no longer advises holding a large stake in the region. The UK stock market has done marginally better than those on the other side of the Channel, thanks to a high concentration of energy equities as oil and gas prices have risen. Despite the fact that the FTSE 100 has lost 7% since the war of Ukraine began, "the UK has found itself in a kind of sweet place because to its huge energy overweight," according to Andreas Bruckner, European equities strategist at Bank of America.

The Stoxx 600 bank index, on the other hand, has dropped by more than a fifth since Moscow deployed soldiers into Ukraine. For the time being, investors appear hesitant to enter Europe's markets in search of bargains. According to Paolini, the recent sell-off has resulted in Europe's shares being 25% cheaper than the rest of the world on a future price-to-earnings ratio, the largest discount since the eurozone financial crisis in 2011. "It is probably not enough for you to close your eyes and buy," he remarked. "There will be a tremendous rally as soon as there is any evidence of de-escalation." However, waiting seems logical because we don't know how long this will endure."

The Response of the ECB

“The war will have material impacts on inflation, economic activity, expectations and international commerce” said Christine Lagarde, president of the European Central Bank. The extent of these effects will depend on the conflict, on the impact of sanctions and even on the future implementation of new measures. The war creates extreme risks for the economy but the ECB maintains its course towards a less expansive monetary policy because of the risk of hyper-inflation, and announces a squeeze also for post-pandemic aid to banks.

As Ed Hutchings, Head of rates in Aviva Investors, underlined in many interviews, the ECB has launched a strong message to investors, stating that it will take all necessary actions to fulfill its mandate. Firstly, the ECB will gradually reduce the purchase of monthly net purchases under the APP, in particular they will amount to €40 billion in April, €30 billion in May and €20 billion in June. For the third-quarter the Governing Council’s decision about the number of net purchases will follow a data-driven approach that will reflect the constantly changing situation regarding the inflation outlook. If, even after the end of its net asset purchases, the latter will not weaken, the Governing Council will conclude net purchases under the APP. On the other hand, if the medium-term inflation outlook varies and financing conditions move away from the 2% target, the Governing Council is ready to revise its schedule both in terms of size and/or duration. The subsequent increase in rates will not be immediate but will happen in a second moment. The news regarding this imminent conclusion of the APP, even before an increase in rates, was anticipated by the market with an initial increase of 0.25% expected for October 2022.

In addition, the ECB has announced that during the first semester of 2022, the Governing Council will proceed firstly at a slower pace, in respect to the preceding semester, with net purchases under the PEPP (pandemic emergency purchase programme) and then it will completely stop them at the end of March 2022; the proceeds will be reinvested at least until the end of 2024. In any case, the future reduction of the PEPP portfolio will be managed in such a way as to avoid interference with the adequate stance of monetary policy.

Summarizing, the ECB has made clear that if inflation will remain at such high levels, it will conclude its quantitative easing programme and it will be prepared to increase interest rates already in September.
Overall, the picture that the ECB is facing, confirmed by the March economic bulletin, is of a growth that, for the standard scenario, stops at 3,7% in 2022 (4,2% was the pre-war prediction) and at 2,8% in 2023. But there is also a “critical” scenario that foresees a growth that falls from 5,4% in 2021 to 2,3% this year and next year.
​
European PMI indexes underline how future expectations are becoming worse day-by-day. Indeed, everything risks degenerating with the prolongation of the war and the escalation of sanctions: is the ECB itself that warns that “the risks coming from a further escalation of tensions could be significant and jeopardize the global recovery”. But the main concern is that letting inflation go, would worsen the economic outlook, just as it did after the oil shock. The main scenario of the ECB estimates inflation at 4,1% this year, the “critical” one at 7,1%. Nobody knows exactly how it will end now that a “stop” to gas imports from Russia is also on the table and that Moscow answers asking to be paid in rubles. As said before, now for the ECB it is better not to fuel inflation by continuing with net asset purchases. In an optimal scenario that, although possible, doesn’t include more surprises (such as a global recession caused by the Russia-Ukraine war), the ECB, from September onwards, will only maintain open the channels of reinvestments of the bonds that are reaching their maturity level. As the governor of the Bank of Italy Ignazio Visco has pointed out several times, this is not monetary tightening and there are various options to contain the negative impact on growth.

The monetary policy committee was beginning to take measures in order to tackle inflation already in February. Many factors were already stimulating inflation, above all the relevant increase (at the start of 2022) increase in global energy price. The CPI inflation should have peaked at a rate of above 7% in April 2022. In three years inflation was expected to slow down to the 2% target. The invasion of Ukraine gave an ulterior shock to the economy. For countries, such as the UK, that are energy importers will slow growth due to the further increase of inflation pressures, coming from commodity prices rising. These shocks led to an extremely significant reduction of household incomes. In addition, the supply chain upsets will further contribute to the slowing of the economy. The peak of inflation (still a bit over 7%) is expected to be reached not in April but at the end of the year, after that energy prices are expected to stop increasing. In the meanwhile unemployment is dangerously rising together with inflation.

The Response of Bank of England

The Bank of England declared that all these shocks will necessarily hit UK real aggregate income and spending, the role of the central bank will be to keep well anchored the 2% target in the long term (in order to avoid a de-anchoring, which would lead to disastrous inflation consequences), to reach the target in the medium term and in the meantime to keep volatility as low as possible.
During the March meeting the Central Bank stated that rates would be raised by 0.25 percentage points, with eight members voting in favor and one against.

Of course, the volatility right after the invasion of Ukraine rose exponentially, especially regarding the gas market. However, markets soon became calm again, with the surprise of many experts. Robert Michele, CIO at JPM, expresses all his surprise towards the unexpectedly good reaction of the markets. The Volatility index (Vix) rapidly went under the 20% value, which indicates that markets are stable and fear has disappeared. A peculiar effect that we can notice is the so-called “information effect”: although it goes against the common view of economics, the interest rates raise led to an increase of trust in the economic growth. This is a total upheaval of the classical way of thinking of monetary policy and leaves an open question about which decisions will the Central Bank take in context, knowing that conventional monetary policy can have little effect on inflation and investments.