The rise of passive investire in America

What is passive investing?
Passive investing is an idea that is rooted in the Efficient Market Hypothesis (EMH). The EMH posits that all available information about a security is already reflected in its price. The EMH further assumes that any returns above the benchmark return of the market are due to higher risk taking. If investors are unable to gain an edge over the market then it logically follows that individuals should minimize their costs and maximize their risk adjusted return by investing in the stock market as a whole. This idea of passive investing was further popularized by John Bogle, who created the first index fund available to the general populace.
​
The rise of passive investing
In 2006, the Pension Protection Act was signed into law by President Bush. The act was of utmost importance since it required the automatic enrollment of all employees in a 401k. This led to a substantial increase in the number of Americans investing in the stock market. Furthermore, with the introduction of the Qualified Default Investment Alternative the HR department of companies was now responsible for selecting the default fund for the employees. Thus, there was a transition from a minority of employees who invested their capital in money market funds, to a majority of employees investing in index funds. As portrayed by the figure below, over the past 15 years the share of passive investing has increased significantly. 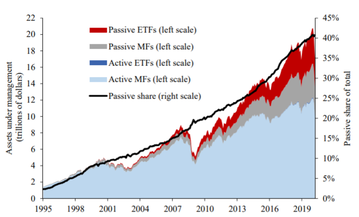 Source: Morningstar
Asset managers move towards passive
It has become increasingly more common for asset managers to prioritize ETFs as investment vehicles. This is mainly due to the higher demand from clients for lower fee investment strategies. The past two decades have seen active managers continuously underperforming the market. Thus, investors are becoming leery of investing in active strategies (mainly mutual funds) which have seen 316 billion dollars in outflows since January. Even asset managers who have historically shunned passive strategies are starting to shift their products to ETFs.

Why passive investing
As the average individual investor, who has no edge in security selection, it is a reasonable decision to invest in a diversified passive fund. Over the past 100 years the stock market has provided around a 10% annualized return. Even though the growth of the American economy in the 21st century won’t approach that of the 20th century, the stock market is still likely to provide a superior return to its alternatives. Investing in the index will eliminate idiosyncratic risk whilst minimizing transaction costs and taxes. However, despite it being rational for an individual to invest in an index, when taken in aggregate the set of actions may be detrimental to the pricing mechanism of the market.

The fundamental flaw
The reasoning behind the idea of passive investing is that of free riding. The premise is that active actors in the market will do the necessary work to properly price securities, which will then allow passive actors to invest in the security at a reasonable price. However, that can only function to the extent that there are sufficient market participants who are rationally buying or selling securities based on newly acquired information. As the number of passive actors exceeds the number of active investors, there is a fundamental shift where for the majority of the market prices are no longer important. The passive actors will continue to invest in a security despite the deterioration of fundamentals or any negative news. If the passive flow of dollars going into a group of stocks is sufficiently high then the market can only counter that if there is sufficient active flows to properly price these securities. Taken to the extreme the idea is so clearly detrimental that John Bogle asserted “If everybody indexed, the only word you could use is chaos, catastrophe…The markets would fail.”
​
How has it impacted markets?
If the main form of passive investing is an S&P 500 index, then it logically follows that these stocks should outperform. Furthermore, given that there are trillions of dollars flowing to these passive strategies, the smaller stocks don’t have enough liquidity to be part of most ETFs or indexes. Thus, it is easy to understand the outperformance of large growth stocks as well as large momentum stocks over this past decade. Using the four factors denominated by professors Fama and French we can analyze the impact from an empirical standpoint. As shown in the figure below, historically small value has produced the most significant excess returns. However, in recent history large growth stocks, which were formerly in the bottom, have produced the most significant excess returns. 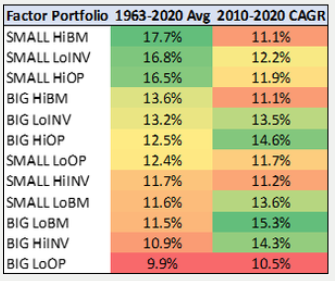 Source: Verdad Capital Research
Given that indexes such as the S&P 500 are mostly cap weighted, then the dynamic of passive investing creates a self reinforcing flow of dollars into the stocks that have succeeded in the past. As a stock outperforms it gains a higher weighting in the market, which then leads to higher flows into the stock. Thus, it is not surprising that over the past decades momentum investing has outperformed the general market. The Fama-French data shows that “Since 1995, momentum has outperformed value an astonishing 73% percent of all three-year periods. Since 2011 (which includes the GFC), the outperformance has occurred 85% of the time”.

When will this dynamic come to an end?
John Maynard Keynes once said that “The market can remain irrational longer than you can remain solvent”. Thus, it would be imprudent to take any sort of market timing action. In 2004 there were many hedge funds that started to position themselves against the real estate market. Unfortunately, they were too early, which led to the winding down of these funds. Finally, we can rest assured that over the long run the underlying fundamentals of a company are the only determinants of market prices, and that valuations should reflect that. Nevertheless, over the short run anything can happen and we certainly can’t predict when this dynamic will stop. In short, it is wise to take the approach of Sir Isaac Newton, who said “I can calculate the motion of heavenly bodies but not the madness of people”.
​
Bruno Badolato