The rise of the hybrid giant SoftBank

SoftBank, the multinational company founded by visionary investor Masayoshi Son, is silently beating everybody’s expectation in terms of returns, thus appearing as a profitable opportunity for investors. The staggering performance over the last few years has drawn the attention of some analysts, especially Chris Lane from Sanford C. Bernstein & Co., who even dared to make a comparison with Buffet’s Berkshire Hathaway.
​
According to Lane, over a 10-year horizon an investment in SoftBank would have outperformed both the corresponding market index (the Japanese Nikkei) and Berkshire Hathaway by yielding a return of around 300%: Buffet’s firm saw an appreciation of around 110% over the same period of time and beat its benchmark (Dow Jones Industrial Average) “only” by 175% as compared to Softbank’s 540% excess return over Nikkei. (1) 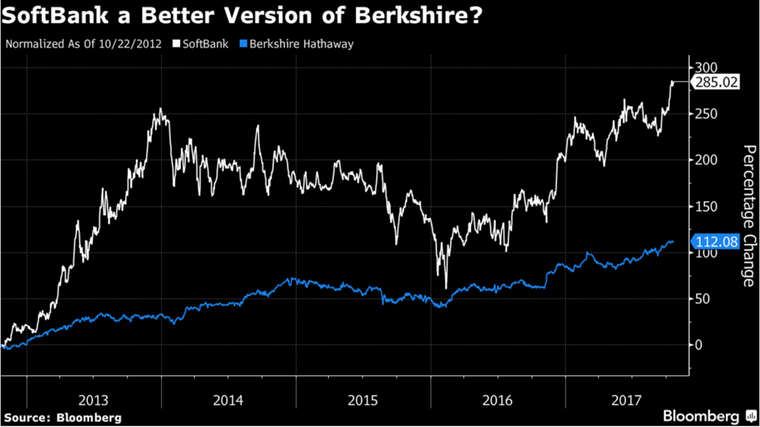 Where does this exceptional track record come from? It is the business model, whose exact definition is hard given the variegated activities pursued beyond the Telecommunication operations. Like Berkshire Hathaway, the essence of SoftBank’s strategy seems to be “value investing” rather than the mere activities of the core business. Son’s firm, in fact, leverages the huge cash generated by Telecom services and invests in those companies which are going to shape the world of tomorrow, such as AI, e-commerce and robotics. It is therefore possible to re-define its strategy as “tech-focused value investing”.

A simplistic view would suggest no synergies can be realized because of the heterogeneity of businesses, but the common thread is actually represented by the bet in the future of technology: as emerged in 2017 SoftBank’s annual report, Son’s vision is to “build an ecosystem that combines infrastructure with content and services on a global scale” and to ride the “technological wave”. The horizontal disruptive force of tech and AI is expected to re-define existing businesses and create new opportunities for growth.

This is the main reason behind the launch of the Vision Fund, which has completed its major closing with $93 billion of committed capital this May. The implicit features of the Fund recall a sort of hybrid Private Equity vehicle, which has significant flexibility in terms of investment strategy: there isn’t specific focus on companies’ stages nor on their private or public status but just a generalized search for innovative technology-based business models: SoftBank targets a wide spectrum of investment opportunities ranging from start-ups to multibillion firms belonging to either the private or public markets. Like the other PE funds, the main goal is to exploit the implicit potential of promising companies, thus gaining from the difference between current undervaluation relative to high exit. There are few peculiar characteristics which make SoftBank’s Vision Fund unique: an unorthodox leverage structure provided by external investors and a decision-making process that distinguish it from other VC and PE funds.

As for the capital structure, there is a mixture of equity and debt capital coming from LPs (Limited Partners). The debt provided consists of preferred units which receive an annual coupon of 7% over the fund’s life: this fixed compensation, together with SoftBank’s skin-in-the-game investment of $28 bn which aligns partners’ incentives, tends to reduce the risk investors face as part of the initial investment is returned before the liquidation date of the fund. The decision-making process is based on Son’s final decision power while an Investment Committee preliminarily evaluates target companies’ attractiveness and provides investment advice to the SBG subsidiary. Therefore, the collective nature of VC decision is changed in a more single-arbiter system.
​
Moreover, the Vision Fund is a significant departure from SoftBank’s previous investing style, even when including other VCs. Over the past 18 years Son’s investment expertise was mainly on early-stage firms while now the massive size of this fund forces a complex shift towards bigger deals. Since 2012 SoftBank has gradually experienced an increase in the average ticket size, thus reflecting growing cash availability. According to CrunchBase, the number of deals has been shrinking while cumulative VC and PE rounds reached the peak of $14 bn in 2017, thus determining an increase in the average equity check of two orders of magnitude in just 5 years. The promising prospects of SoftBank’s strategic plans were reflected in the market prices, which skyrocketed reaching 10,000 JPY, and a P/E of 16.6. However, it is important to outline the risks connected with this bold strategy.

Firstly, the excessive amount of ready-to-use cash together with the “normal”, short term investment period can cause SoftBank to deploy capital in unprofitable ways, thus wasting money and reducing returns. Secondly, a direct consequence of this big player entering the PE industry is the threat posed to the private market: Son’s conglomerate could make it implode by consuming all good opportunities (especially rare in this moment relative to the huge fundraising, which cause significant “dry powder”) and driving up prices and valuations (potentially far away from fundamentals). Finally, SoftBank’s Vision Fund negatively affects the Capital Markets business of Investment Banks in the Tech-based sectors as sizable investment can induce companies to stay private longer.