The Shenzhen – Hong Kong Stock Connect: Much Ado About..?

On Monday 5th December the Shenzhen-Hong Kong Stock Connect eventually opened, giving foreigners the possibility to invest in 881 companies in Shenzhen, including fast growing small caps, in China. As compared to the similar link opened between Shanghai and Hong Kong back in 2014, Shenzhen-Hong Kong’s healthcare and technology firms could provide investors with diversification opportunities, while Shanghai hosts State owned slow growing companies.

Its performance was rather disappointing, though. The Shenzhen Composite Index fell 2,6% (Figure 1), with a lower than expected foreign participation. On the other hand, the Shanghai Composite Index and the Hang Seng China Enterprises decreased by only 1,7% and 1,4%, respectively. Overall, the demand for Shenzhen shares was only 390$, which accounts for one fifth of the available daily quota. By contrast, at the opening of the Shanghai-Hong Kong connect in 2014, Shanghai stocks sold out before the market closed. 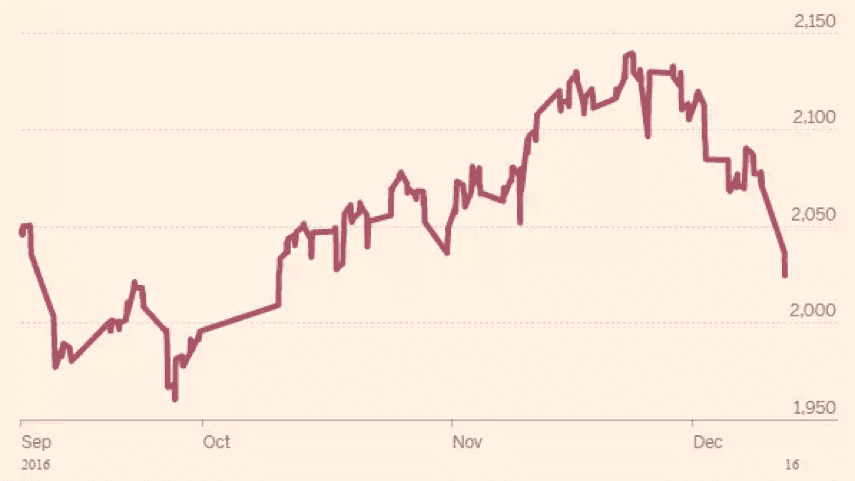 There are two possible explanations to this shortcomings. Firstly,  there is uncertainty due to the contingent political events. The recent abdication of the Italian Prime minister, preceded by the unexpected election of Donald Trump shocked the markets and brought about general scepticism and a subsequent rush to safe haven assets. Secondly, in spite of the Chinese pressure, Chinese A-class shares were denied inclusion in the MSCI Emerging Markets Index last June, for the third time. Conversely, back in 2014, the odds were that the MSCI would have admitted A-class shares. The recent rejection surely diverted investors from welcoming the Shenzhen-Hong Kong Connect. Probably, the MSCI decision raised concerns about the monthly repatriation cap worth 20% of the A-shares net value as well as the delays in the Chinese authorities in implementing daily capital repatriation deregulations, in spite of their approval earlier in February.

On the other hand, Charles Li, chief executive of Hong Kong Exchanges and Clearing provides this straightforward metaphor to make up for the poor debut of the link: “When you build a bridge, the traffic will come in the next 20 years. You don’t really think about the traffic the next week”. Although it may sound somewhat apologetic, this actually could make sense.

Once again, market signals are prompting Chinese authorities to relax or revoke the regulatory burden. Like for Shanghai, there are no limits to the amount of investment in Shenzhen, though there is still the 13 billion Renminbi quota. Meanwhile, Shenzhen firms will more easily hedge from their currency fluctuations by offsetting positions in Hong Kong dollar, whose fluctuations generally follow US Dollar. Among the others, this potential benefit could reduce volatility in Chinese firms’ performance, which might be a step towards stability.