The short selling ban: is it the right solution to volatility?

​After the coronavirus brake out and the spread of panic among financial markets, regulatory authorities in several European countries (among which France, Belgium, Italy and Spain) have temporarily suspended short selling in order to boost investors’ confidence and to prevent a further collapse.
Over time many countries have banned short selling in periods of downturn, as it is widely perceived as having a magnifying effect during collapses and that the users of this practice benefit from the misfortunes of others. Shorts have been blamed for almost every financial crisis, coming under fire after 1929 Depression, 2000 dot-com bubble and 2008 Recession. Short sellers are not infrequently attacked both by political parties and by business managers. But what’s really their role during collapses?

USA 2008 financial crisis and EU 2019 Covid-crisis
As part of its response to the 2008 GFC, the SEC restricted short selling in nearly 1000 financial companies, effective September 18 (three days after Lehman Brothers filed for Chapter 11 bankruptcy protection). The effect on short term fluctuations was questionable, as followed weeks of losses and high volatility, and we had to wait almost six months to reach the bottom. The S&P 500 lost more than 35% before the trend inverted, as shown by the chart below. 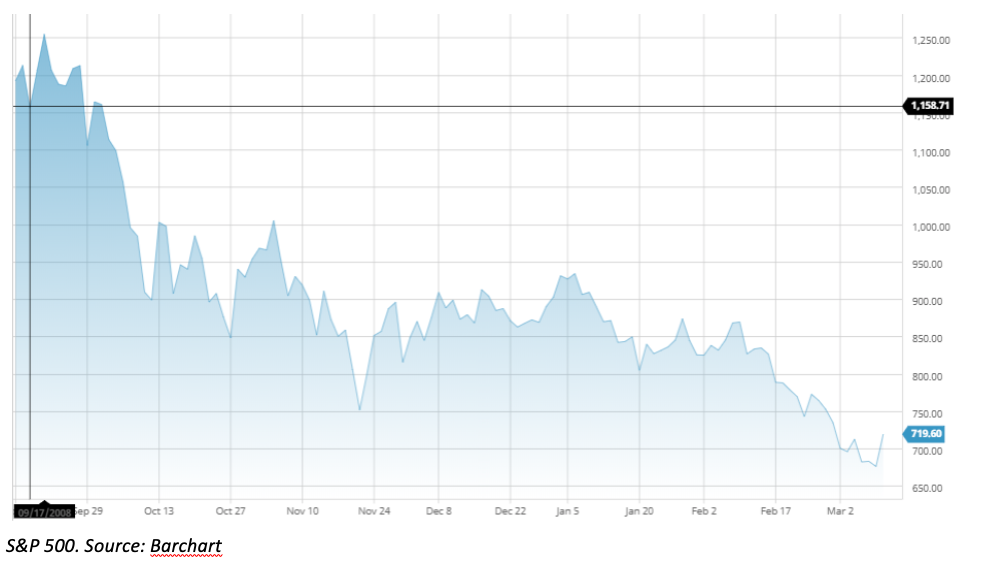 France, Italy and Spain have been the first European countries to implement a shorting ban after the Covid-19 Crisis, on March 17. Italy’s Consob and France’s AMF halted shorts in a restricted number of companies first, but later extended the ban to all the respective markets. As most European indexes are up more than 10% since the restriction has taken place, the regulatory intervention may have shown a positive effect. However, we must be careful in drawing a conclusion, as we are still in the middle of the crisis and the positive performance can be attributable to other reasons unrelated to the shorting ban (as central banking massive stimulus).

Disrupting investment strategies
A large portion of alternative investors (especially L/S, arbitrage and event-driven Hedge Funds) are being severely hit by the regulatory decision to ban short selling, as they miss one of their core investment tools. Not only they are being deprived of an instrument to mitigate risk and to play their function of hedging, but they could expect an increase in outflows and redemptions which could force them to unwind big positions and to exacerbate market volatility. Other ways to bet against a rising stock market exist, but they tend to be more complicated, less efficient and more expensive than shorting individual stocks.
Despite being often criticized by the public short selling might not be all bad, particularly during periods of relative stability? Many well known investors believe short selling plays a positive role in public markets, for example balancing the natural bullishness of investors, helping in finding overvalued companies and exposing possible frauds and other unsound practices.
Authorities investigations about fraudulent practices often start from an investor’s bet against a company: the short seller Jim Chanos was one of the first to expose Enron’s fraud.
Pershing Square’s Bill Ackman denounced Herbalife’s business model (accusing them of being a pyramid scheme), and the company was convicted by the US Federal Trade Commission to pay $200m and “fundamentally restructure its business”.The campaign against Herbalife started in late 2012, when the fund manager announced his bet and accused the nutrition company to profit mainly from recruiting new distributors (which have to buy a minimum worth of products) and not from selling Herbalife’s items to clients. He proved that most dealers lose money, at the benefit of a really small portion of them at the top of the chain.
In 2019 Quintessential Capital Management placed a bet against the Italian Bio-on, active in the bio-plastic industry, accusing the company of accounting irregularities. Once again, the regulatory authorities have launched an investigation, and the CEO Marco Astorri was replaced and accused of false accounting and market manipulation. The trial is under way.
Considering the huge number of variables which affect financial markets, it’s really difficult to determine the actual role of short sellers during periods of turmoil. However, it is generally easy to determine ex post how each crisis is caused by drivers which have nothing to do with this kind of bets. Moreover, we miss empirical evidence in support of thesis according to which shorting makes downturns worse. On the other hand, this practice is likely to have positive effects on efficiency, on balancing sentiment and on discovering improper behaviours.