The State Of The China-United States Relationship 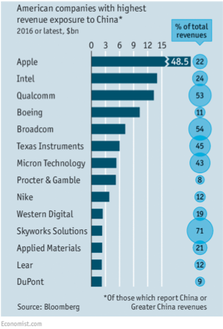 Economic Impact of the Relationship’s Political Aspects
It is useful to study the current political climate of this bilateral relationship as every aspect in the broad political spectrum can potentially have an economic impact.

The disputes over the South China Sea and the islands within it continue to strain ties between the two nations. China, among other countries, stakes its claim to the Sea while the United States believes in designating the Sea as a part of international waters. However, this is not just some territorial dispute – an estimated $5 trillion of global trade passes through the South China Sea annually. Moreover, it is approximated that bountiful oil reserves, to the tune of billions of barrels, can be found beneath the seabed of these troubled waters. Indeed, this quarrel can have staggering monetary consequences and disrupt the balance of power between the two economic giants.

Additionally, it is necessary to understand the impact of President Trump’s administration, and its protectionist, “America first” approach to foreign policy. Earlier this year, hefty tariffs of up to 50% and 30% were levied on American imports of washing machines and solar panels, respectively. China, the largest exporter of solar panels to the United States, voiced its “strong dissatisfaction.”

However, American tariffs on Chinese imports are nothing new – President Obama imposed tariffs on Chinese tyre exports to the US. Yet, President Trump’s bold proclamations, laced with undertones of American nationalism, and his stern views on the trade balance between the two nations favouring China, make one anticipate that more tariffs and potentially a trade war between the two countries could arise. After all, China has a history of retaliation.
​
As the graph illustrates, plenty of American companies depend on China heavily for their revenues – any of these companies could be easily be targeted by Beijing as retaliation. In response to these latest tariffs, for example, China can look to hinder American exports of aircrafts manufactured by Boeing. Furthermore, Chinese businesses and investment decisions are being affected by the tensions between the two countries. Earlier this year, American intelligence agencies cautioned against using devices manufactured by the Chinese telecommunication companies, Huawei and ZTE, claiming they posed security threats to American interests. Then late in February, the Committee on Foreign Investment in the United States (Cfius) blocked a $580 million bid by a Chinese state-backed fund to acquire American semiconductor tester, Xcerra. This was seen as another move to prevent potential spying by Beijing. 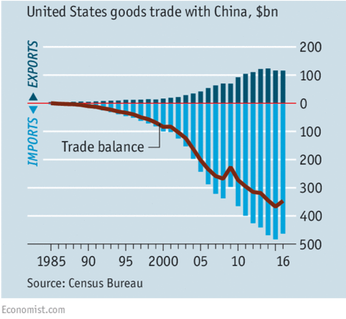 State of the Trade Balance
In 2017, US exports to China totalled $130 billion, while imports aggregated to $506 billion. As a result, Washington’s trade deficit with Beijing amounted to $375 billion. And as the graph depicts, this trade deficit has increased rapidly over the past few decades. This is largely due to the growing American importing of consumer electronics and clothing made in China. The relatively low wages paid to workers in China is one of the main factors that has allowed the country’s manufacturing in these areas to dominate.

Who Needs Whom The Most?
According to The Conference Board, a think tank, in 2014, China’s value-added exports to the United States accounted for approximately 3% of China’s GDP. Whereas, US value-added exports to China were only responsible for 0.7% of its GDP. By these numbers it seems as though China is dependent upon the United States. However, according to a report co-authored by the US-China Business Council (USCBC) and Oxford Economics, the US needs China as well: the report claims that US-China trade supports approximately 2.6 million American jobs.

Looking Forward
In conclusion, the complex tangles of friendship and animosity between these two economic giants have the power to shape the global economic landscape and the distribution of power. Only time will tell how the Trump administration plays its cards and whether its decisions spark a trade war or, alternatively, more bilateral agreements. One thing is certain: given its sheer economic impact, the China-United States relationship is one to keep an eye on in 2018.