The tricky interplay between the automotive industry and industrial commodities

Industrial metals have been one of the best performing asset class in 2017, partly buoyed by the strongest global growth since the financial crisis. The London Metal Exchange Index, which is the futures exchange with the world's largest market in options and futures contracts on industrial metals, has soared by almost 20% since the beginning of the year.

One of the main factors behind this trend, besides the strong economic growth, is the “renewable energy revolution” concerning the automotive industry for the production of electric vehicles. The International Energy Agency has recently disclosed that in 2016 there were 2m of electric cars worldwide and that this number will rise to 40m by 2040.
​
The main purpose of this article is the analysis of the twofold link between the automotive industry and the so called “battery commodities”. Firstly, the production of electric car batteries relies on several raw materials – such as cobalt, lithium, nickel, zinc and aluminium. On the one hand, forecasts of EVs sales for the next 20 years have been playing a major role in the price increase of industrial commodities, due to the fact that carmakers and battery producers are trying to secure a long-term supply of this kind of materials for their push into electric vehicles. On the other hand, the price increase of these commodities could be enormous due to a possible mismatch between a high demand and low supply: this could undermine the electric car market, because the production costs would rise to a point that would kill the demand for EVs. 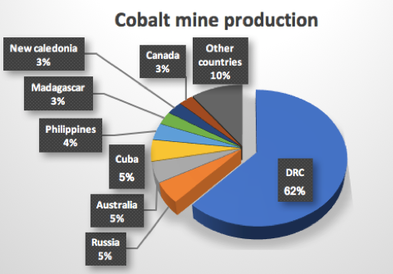 Cobalt, for example, is a fundamental material for the lithium-ion batteries produced by Tesla, Nissan and Chevrolet, therefore these companies are substantially exposed to price movements in this commodity. But during the past year the price of cobalt has soared by more than 80%.
​
Moreover, according to Wood Mackenzie, demand for cobalt in EV batteries is expected to grow fourfold by 2020, and eleven-fold by 2025. This fact could undermine the business of EVs due to a possible shortfall in supply: more than 60% of Cobalt in the world is extracted in a handful of mines in Democratic Republic of Congo, one of the most impoverished and politically volatile ​countries in Africa. 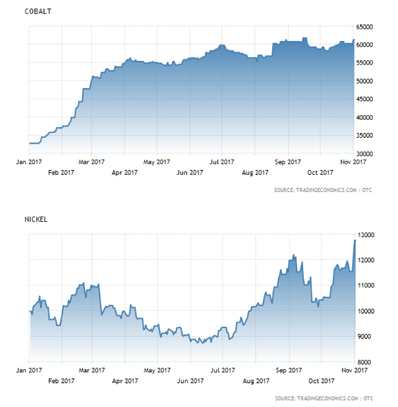 ​
During the past few weeks, companies like Volkswagen tried to negotiate a long-term offtake agreement that would guarantee fixed pricing of cobalt for a minimum of five years, without success. Because of its high price and supply uncertainty, several battery makers are developing new technologies that use a higher amount of lithium and nickel, but less cobalt, with a better performance.

That is why nickel is becoming a crucial material for EVs supply chain, especially ​because it is one-sixth of the cost of cobalt and around 20 times more abundant. According to Wood Mackenzie, nickel demand in EV batteries will jump from about 40,000 tonnes in 2016 to 220,000 tonnes in 2025. Given forecast of a stronger demand, nickel prices rallied to their highest levels in over two years on Friday, to $12,758 a tonne (23% yearly increase).
It is also interesting to look at the performance of other battery commodities that have heavily benefitted by this “electric car revolution” in 2017. Lithium demand is expected to grow fourfold to 779,000 tonnes by 2025 and, although it is more abundant than cobalt, it could also face supply shortfall in the next few years. In 2017 lithium price has soared by 70%. Zinc prices have risen almost 32% since January, aluminium saw a 26% increase and also copper has rallied this year (37% increase) under the belief that it will perform well with the increase of EVs. 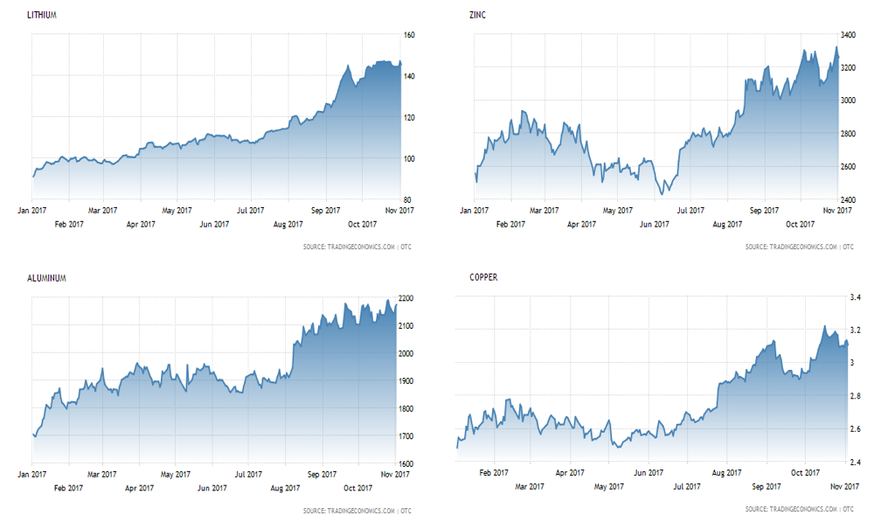 This year we have seen that the Automotive Industry has had a huge impact in industrial commodities market, but it is clear that these dynamics could fire back and undermine the business of electric cars, putting an end to the dream of a “renewable energy revolution”. Someone believes that this dream could survive only through a battery technology revolution, in order to develop new batteries that don’t rely on rare materials. That is why a British engineering group, Dyson, is trying to develop a solid-state battery replace a battery’s liquid electrolyte with a solid, safer material.
Antonio Pirisi