The Tumble of European Investment Banks in the US Market

In the last decade, the fast-paced Investment Banking sector has been facing critical changes that have reshaped its structure around the world. The years following the global financial crisis revealed the largest and most solid US banks as great winners, being able to more than double their profits and pose a substantial gap between all the other worldwide competitors.
If the American largest banks, such as JP Morgan, Bank of America, Citigroup and others stood triumphant from the past 10 years, European Investment banks faced harsh difficulties and have kept losing ground in the competitive banking industry.

The European Retreat
The underlying circumstances connect with a noteworthy trend of European banks retreating from the US market. If we look at the presence of the largest European Banks in the US, namely Barclays, Credit Suisse, Deutsche Bank, HSBC and UBS, we can observe a prolonged contraction in asset size and divisions.
​ 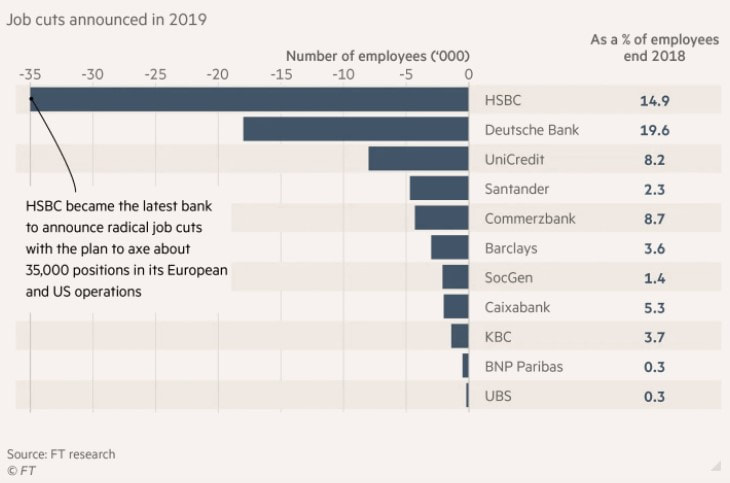 ​The latest announcement regards HSBC’s withdrawal, who has recently decided to cut around 35,000 positions, including 30% of its branches and 45% of US Global Markets businesses. According to HSBC’s CEO Mr. Quinn, the incoming transformation will redesign the global structure of the British bank and will address a critical restructuring approach in particular in Europe and in the US to regain market share and profitability. This update comes after a series of European Investment Banks shrinking their divisions in the US market. For instance, in 2019 Deutsche Bank closed its global equity section in Wall Street and cut a significant part of its workforce. Moreover, this trend has been accompanied by the leading Swiss banks, Credit Suisse, that has abandoned private banking in the US and has restricted investment banking, as well as UBS, which has cut a large portion of the US bond trading section.

The early signs of a promising European Rise
In contrast with this declining outlook, if we consider the period from the early 2000s until the global financial crisis, the largest European banks were living a florid moment and were expanding their scope with significant acquisitions in the US market, for instance, the most striking one was Lehman’s $1.75bn takeover by Barclays. These fruitful deals allowed European banks to become significant players in the foreign market and to gain important positions, in particular in leveraged finance and fixed-income trading areas.
In the last ten years, an opposite tendency has been observed and is strongly delineating the presence of participants in the US banking landscape. Even though the pre-crisis period was the golden age for EU banks in the US, their performance was inconsistent and never sufficient to stand in the top leading bank positions. For example, in 2002 Deutsche Bank only ranked eighth in terms of investment banking revenue fees with $872m, still pretty far from the leader, Bank of America with $2.6bn. Likewise, the other main European banks also never held the top five positions in the league tables and lost even more ground in the following years. In fact, as we can see in graph 2, prior to the financial crisis, European Investment Banks earned more revenues than in the recent years, but their influence in the US market was never adequate to compete with the largest domestic leaders. Even though they were able to gain a good portion of market share in the first decade of the 21st century, afterwards they fell further behind and “never made money over a couple of credit cycles in the US market”, as Paul Tucker, a former deputy governor of the Bank of England, said. 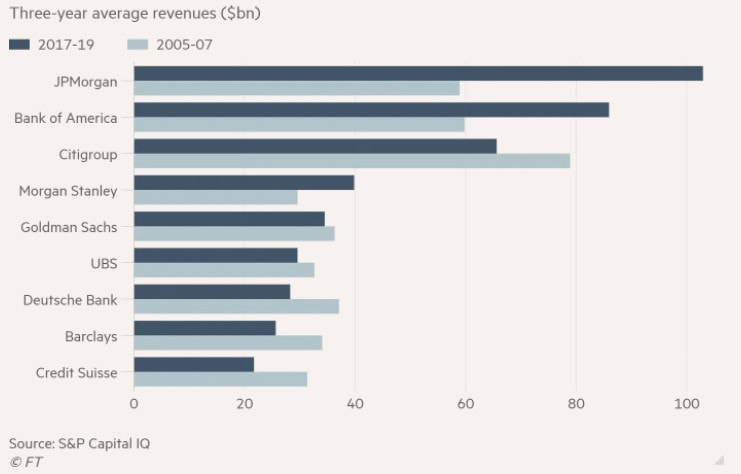 What made it unfeasible
Since 2016, when the new US regulation required foreign banks to move the majority of their operations to IHCs, intermediate holding companies, to be independently capitalized and to comply with stress-tests, the European Banks have at the same time contracted their asset exposure and increased their capital, thus falling short on returns.
Besides that, even though the financial crisis in 2007-2009 hit both the US and Europe harshly, in recent years the American market has been experiencing a healthier environment with a continuing expansionary period, 11 consecutive years, that favoured economic growth and prosperity.
On the other hand, Europe faced more difficulties in terms of geopolitical uncertainties, stagnation and negative interest rates, that slowed the economic expansion and consequently had repercussions on bank profits. As a result, the previously large US banks found a favourable field to expand and were able to widen the competitive gap with the smaller European challengers further more.

In conclusion, the European banking presence in the US market is constantly weakening and is complemented by an ongoing restructuring process of the whole banking sector. The future of European Investment banks stands in their ability to reshape the functional activities and redesign the strategic positioning in the global competitive market to become more flexible to changing conditions. Following the overview of the American banker Ken Moelis, the banking world is basically targeting two main tracks: the former, of large-sized and capitalized banks, such as JP Morgan and Bank of America, and the latter, of agile and specialized boutiques, namely Moelis & Company. Since European Investment Banks are fluctuating between the two frontiers, they are competing in a medium precarious field that does not provide them with a sustainable competitive advantage and leads them to
become even weaker.