The weakness of Turkish Lira

Turkey has recently experienced a worsening of its overall economy mainly due to some changes prompted by the ruling party that decided to intervene heavily on the economy of the country. We’re going to explain what was the situation of Turkey before the sudden increase in inflation, why it happened and the direct consequences that traders and the economy had experienced.

We have to start first by stating what normality has been for Turkey throughout the last decades: the devaluation of its currency, the Turkish Lira. Indeed, the central bank has been increasing the money supply steadily (as can be seen in the chart below). 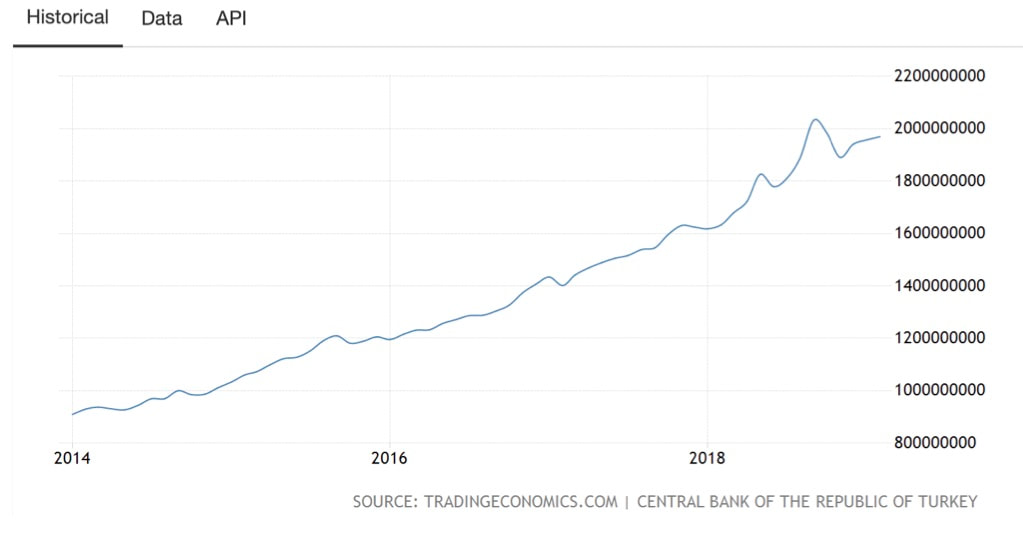 As a consequence the exchange rate with major currencies (ex. dollar and euro) has suffered and from 2010 when 1 USD was worth 1.4 TRY, in 2018 it reached 6.9 TRY. This situation was stable until the inflation reached more than 10% to peaks of around 20%. With this level of inflation capital started leaving the country, both from Turkish citizens and from foreign investors. This is because inflation erodes the value of capitals and makes it more and more difficult to plan investments for firms.

Furthermore, there is another big problem: the inflation made difficult to understand what the real value of the Turkish Lira would be in the future. This has pushed increasingly more Turks to open deposit accounts denominated in euros and dollars, meanwhile banks have been lending to Turkish firms amounts denominated in stronger currencies different from the Lira.

In this situation a country has usually two possibilities: keep pumping new currency in the economy and thus going toward an end similar to the ones of Zimbabwe and Venezuela or monitor government spending and the growth of currency in the system. Turkey opted for this second way, and through the “New economic program” it has targeted a restrictive control of the monetary growth through a raise of interest rates (brought at 24%). This has worked, and the M3 has stopped growing. As a result, the inflation started decreasing as we can see in the graph. 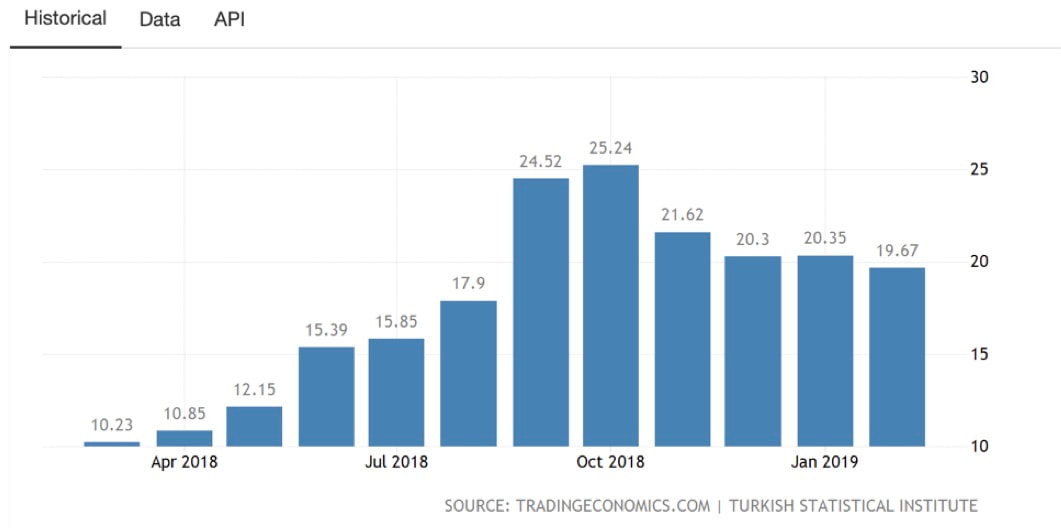 However, after this move that seemed working, Erdogan and the government decided to try another way to prevent the Lira from devaluating. That is, by drawing from the foreign exchange reserves of the central bank. Unfortunately for Erdogan, the market noticed. In particular, two JP Morgan Analysts suggested that there was room for another devaluation of the Lira. In fact, the Lira started its decline. But what happened was that instead of addressing the real problem, Turkish authorities blamed foreign investors. The authorities decided to halt the selling of Turkish Lira to foreign investors. The latter found themselves blocked in their trade. Let’s make an example: a trader sells forward Lira at 1 month, during this month he wants to close the deal because it becomes very profitable, however he cannot do it because he would have to buy Turkish Lira. He can’t do so because the government is prohibiting foreign investors to buy Liras. Therefore, the Overnight Lira rate exploded because traders where rushing to close their carry trades (as shown in the graph below). This move has acted as a credit crunch for the Turkish economy and probably we will see the negative effects in the next months.
The only way out from such a situation is fiscal and monetary tightening. Unfortunately, the government doesn’t seem prone to do that, and actually it is trying to halt the devaluation using central bank foreign currency reserves. This hasn’t produced any remarkable effects at the moment, apart from a reduction of one third of central bank’s total reserves only in the first three weeks of March (see graph above).