Singapore has grown and transformed in myriad ways over the last 10 years. Although the economy has seen an overall calmness over the decade, the property market was sparkling. A bullish surge in private property prices began after the 2008 Great Financial Crisis. As Chinese developers entered the market, the keen interest from foreign buyers fueled housing requests from locals who expected a period of buy now-or-never.

One of the most high-profile investor has been James Dyson who bought the Wallich Residence super penthouse for $73.8million as well as another luxury property for $41 million. Another big player into the Singaporean real estate market was the owner of Alibaba, Jack Ma. He bought a 30,000 square foot piece of land to build a two-story mansion. And lastly Facebook's co-founder, Eduardo Saverin, who allegedly purchased a $230 million mansion following his Singapore Citizenship in 2012. The Singapore luxury property market, which performed further above expectations in 2019, is likely to outperform in 2020 as new deliveries are due.

At the same time, intense competition among developers may occur price increases for higher-end properties.  Foreign buyers will continue their investments as they regard Singapore a relatively cheaper property destination compared to the likes of London or New York. One of the main reasons for this flood in foreign investment, and indeed keenness within local buyers is due to the government regulation of the property market. Singapore Residential Property Act regulates pricing and allocation as well as it ensures foreign investors not to use the real estate market for speculative buying and selling.

In 2018, Singapore's luxury real estate prices increased by 9.1 per cent and demand so far, has been consistent, ranking highly on the Prime International Residential Index, operated by Knight Frank. Knight Frank, one of the prime real estate market player, also reassures on worries about lack of supply and over inflation. The government dropped stamp duty in 2017 for local buyers but raised it for developers and non-Singapore residents to cool down the demand.
​
Thanks to the intervening measures made by the government, the property market has seen through the decade without major effects, such as a housing bubble. 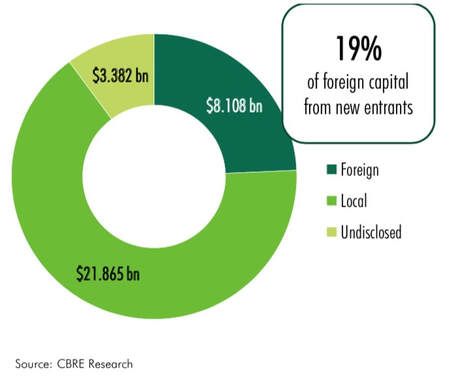 But the rise of property values was not merely driven by speculation or through the huge amount of foreign investment we are currently seeing. The main driver of this exceptional growth is enclosed in tangible fundamentals.
​
The huge amounts of development taking place across the country as the increase in national population, GDP and freedom catalyzed the development and rejuvenation of numerous locations within the city-state. The private residential market launched 52 new projects in 2019 with 17,000 units for sale. Sales of new private homes totaled 9,912 units in 2019, 12.7 per cent higher than the number sold in 2018. Prices also grew more sustainably at 2.7 per cent compared to 7.9 per cent in 2018.

Going ahead, trends such as smaller household sizes and concepts like co-living could possibly stimulate housing supply, strengthening the effect of population increase and economic growth. The increase in supply of vacant properties isn’t downright a bad thing as long as, on an individual level, buyers remain realistic, they have good judgment and borrow within their means.

But why Singapore seems so attractive to investors?

The answer is quite straightforward as the city-state currently has a strong strategic position globally. With the UK facing the whole Brexit drama, the US-China strong political tension, Hong Kong rebellions and Europe facing its internal issues, Singapore seems a neutral stance. Low crime statistics, high standard of living and safeness from geopolitical and economic issues make Singapore property market look like a dream investment. Only time will tell if Singapore will continue to flourish because of its neutrality.
But given the geopolitical climate going on and the spread of Coronavirus pandemia the answer seems positive.

Minister for National Development Lawrence Wong addressed the potential impact of the Wuhan virus on the economy. “There will be impact, let’s be very clear about that … we are already seeing it,” he said.
“Even while we’re doing all we can to take precautions to guard against the spread of the virus, and continuing to monitor the situation, we are studying how best to support these affected sectors and to also provide support for the overall economy.”