According to Mergermarket data, in 2018 technology, media and telecommunications M&A activities hit all-time high in EMEA. In fact, TMT M&A deals value reached €169 billion, recording a 177% increase if compared to the previous year. Despite taking few years to recover from the 2008 financial crisis, last year value surpassed also the pre-crisis record set more than a decade ago. 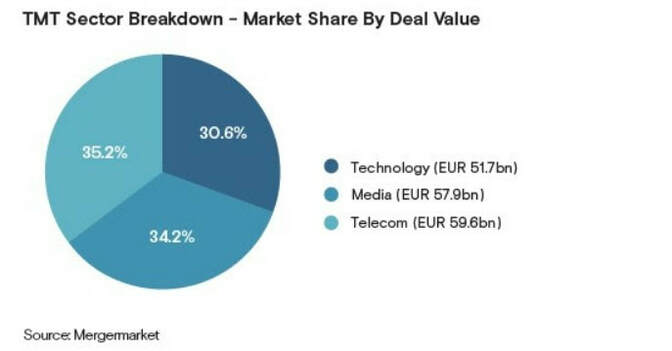 Breaking down the numbers, TMT sector had five so called mega-deals worth more than €5 billion (€83 billion collectively). The most debated has certainly been Comcast’s €42.2 billion acquisition of Sky, advised, among other banks, by the historical Sky’s advisors Morgan Stanley and PJT Partners. Following in the ranking is the most important telecom deal, Vodafone’s €18.4 billion purchase of Liberty Global’s cable assets in the Czech Republic, Germany, Hungary and Romania. Should the deal be approved by financial regulators, Vodafone would see its market share increase and Vodafone would became  the largest provider of high-speed broadband and cable services across Europe.

Big corporation executives took advantages of increasing stock prices, which jointly with customer confidence and still relatively low cost of borrowing created good conditions for deal making activities. In particular, as far as telecommunications, stock’s high dividend yield and relatively cheap valuation increased merger value by more than 280% reaching a peak €60 billion. “We like telcos right now because they’re cheap relative to the market but also because I think we’re at a real moment of change,” Hugh Cuthbert, co-manager of SVM All Europe SRI Fund, said. “The industry should start to converge together, particularly in Europe, in order to take advantage of scale as carriers look to buy new 5G equipment”.

What many are questioning now is whether this year can keep up, or if some factors might interfere and slow down M&A activities. Predicted decrease in stock valuation, together with Brexit approaching and the threat of the US-China trade war can dissuade potential buyers to set about M&A activities.

A geographic market that analysts predict to grow in 2019 is Africa. According to analysts, African TMT operations should generate around €10 billion this year, due to mainly an increasing appetite from global investors. For example, two weeks ago it was reported that South African data centre firm Teraco Data Environments was sold for $1 billion to US private equity firm Berkshire Partners. This year is expected to hit record high in the African continent especially thanks to TMT Infrastructure, as many deals have already been planned. Leading regional African mobile telecom infrastructure operators such as Liquid Telecom, IHS Towers and Helios Towers Africa hired investment bankers trying to fuel their growth plans.

A fundamental meeting, already in the agenda, is the annual TMT Finance Africa conference, which will be held on March 28 in Cape Town. In fact, leaders from the largest African telecom, media, and technology companies, investment banks and investors are meeting to discuss about potential investment opportunities.

A trend to keep a close watch on, since it is shaping the media & entertainment industry, is the shift from traditional pay TV to streaming and mobile services. In fact, according to Deloitte, more than 50% of households have subscribed, or are thinking about subscribing, to paid streaming video services. Hence, as many consumers are shifting from their pay TV subscriptions to streaming video providers, they are also realizing that they need several subscriptions in order to satisfy their viewing preferences. As a result, since providers will probably try to aggregate their offerings this year, this could work in deal generating favor. As far as technologies, it is worth mentioning how 5G has been the main driver of many M&A activities, thanks to the potential of its fast data-transfer skills and low latency.

In conclusion, the industry’s landscape is likely to keep evolving in 2019, mainly driven by M&A activities. Media companies are attempting to strengthen their content platforms, and a few mega-deals might concentrate the offer of media contents. Many telecommunications companies are also trying to integrate their offers with media services, this trend is likely to push TMT M&A deals value even further.