​Tokopedia: will it take the risk of a dual public listing?

Tokopedia, a unicorn technology company based in Indonesia, was founded in 2009 by William Tanuwijaya. Its main vision is to democratize e-commerce and to enable the idea of a digital ecosystem. Its main competitive advantage in the market is its extended operation in rural areas of Indonesia, including more than 17,000 islands where online shopping is still quite under-developed. Tokopedia has more than 90 million active monthly users, while its community of sellers has risen to 6.4 million from about 5 million last year. Supported by the SoftBank Vision Fund and Alibaba Group Holding, it is considered as one of the country’s most valuable startups. Tanuwijaya, who is now the Chief Executive Officer, supports that the firm projects to break even next year. In fact, its success can be guaranteed by the fact that its gross merchandise value reached USD 5.1 billion in 2018 and is expected to more than triple to USD 15.6 billion this year, a figure which is equivalent to 1.5% of the whole Indonesian economy.

E-commerce remains the strongest contributor to Southeast Asia’s internet economy, while Indonesia is the greatest asset of the internet market in the region. Projected to quadruple from USD 38.2 billion in 2019 to USD 153 billion by 2025, the market examined owes that growth to Indonesia, where the e-commerce industry is expected to increase its value from USD 21 billion to USD 82 billion. Moreover, the unicorn is expected to contribute USD 12 billion to the country’s economy in 2019. However, Indonesia’s e-commerce penetration still remains to around 4% to 5%, giving the opportunity for future growth. 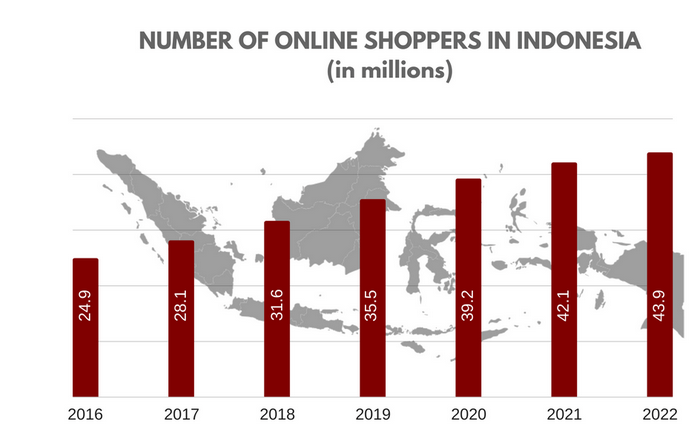 ​Tokopedia has been discussing recently with potential investors about its last private funding, before proceeding to a dual stock market listing. Indonesia’s largest e-shop is in consideration of an internal, as well as an external listing of its shares. The prospect of an overseas listing, in a yet undecided location, will not only advance its current status but also attract new investors. In fact, a dual-listing is the most likely approach to be selected, due to Tokopedia’s will to have its consumers and sellers becoming its main shareholders. As a matter of fact, if the company only lists in Indonesia, it will have limited investors, while if it lists on an international stock market the investor pool will be much larger.

The market capitalization in Indonesia is relatively small compared to the US one, and thus limited foreign institutions can enter the Indonesian market. Furthermore, the transactions per day in the Indonesian stock market only amount to USD 568 billion. As there are only a few large-scale public companies in Indonesia, especially in the technological and digital sectors, the marginal confidence of investors is not as great as in the US. To that extent, a dual listing could inspire more local investors to support the firm. Needless to say, the level of expertise of international investors in the digital industry will be valuable for the advancement of the company. The Indonesian government, through its IT minister Rudiantara, has encouraged unicorn companies to first go public internally so that they can absorb capital from domestic retail investors. Moreover, companies with valuations above USD 10 billion are advised to have more than one listing, as the public offering of shares can be too large to be absorbed by local investors alone. However, a precise timetable for the initial public offering has not yet been announced by the owners, who are trying to deal with the uncertain market conditions.

Prior to proceeding with the dual listing, Tokopedia’s owners should consider that this is not a new approach for Indonesian companies. With the prospect of a global recession, it is significant for large platforms, like Tokopedia, to build a sustainable business by generating profits. In the case of a downfall of a firm like Tokopedia, with more than 90 million monthly active users, a consequent systemic effect could not be avoided. In particular, for tech companies there is the risk of their business model not being ultimately tested prior to its release in the market. To that extent, all scenarios related to operating and business models, including corporate governance should be examined. In Tokopedia’s case, the firm is aiming for a listing at a time when many of its competitors in the marketplace are holding back on their strategies. Uber Technologies Inc.’s mediocre debut and the chaos surrounding WeWork’s botched IPO have put startups under pressure to prove that their business models can lead to revenue and generate growth. In fact, the co-founders of Grab, Southeast Asia’s most valuable startup and another of SoftBank’s portfolio companies, have said they’re not planning an IPO any time soon.
If Tokopedia succeeds in her debut on the stock market, this would attract other unicorn companies and even mid-sized tech firms to follow suit, boosting the Indonesian digital economy in the long run.