The Japanese tech-giant Toshiba agreed to a ¥2tn ($18bn) deal to sell its memory chip business to a consortium led by Bain Capital. The divestment was necessary after the company got into financial trouble due to severe losses caused by Toshiba’s US nuclear power plant subsidiary. Toshiba had to secure a deal and sell off assets in order to prevent delisting from the Tokyo Stock Exchange.
The reason why Toshiba had to pursue a sale of its memory chip business was a catastrophic venture into the nuclear power plant business in the United States. The problems stem from Toshiba’s US subsidiary Westinghouse Electric Company, which it acquired in the beginning of 2006 for $5.4bn. The price has been considered surprisingly high at the time and the deal now backfired. Westinghouse is a producer of nuclear reactors and pioneered a new kind of reactor design, which was intended to be cheaper to construct and install, easier to maintain and more robust regarding possible earthquakes or terrorist attacks with commercial airplanes. The concept was to pre-build sections of the plants before transporting these parts to the place of construction. However, this new concept now almost bankrupted Toshiba as cost overruns in two major projects in Georgia and South Carolina amounted an estimated $13bn. On 29 March 2017, Westinghouse filed for Chapter 11 bankruptcy, while Toshiba said it expected to book a $9.9bn loss for its current fiscal year. 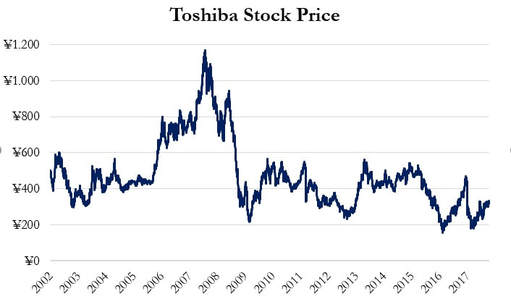 In order to avoid bankruptcy of the parent company, Toshiba had to raise capital through the sale of a business unit. Due to the size of the Westinghouse losses, Toshiba had to identify a business, which is able to free up a significant amount of capital in order to shore up its balance sheet. The business picked for sale was the memory chip unit. Toshiba (18% market share) is – behind Samsung (~40% market share) – the second largest producer of NAND flash memory, which is necessary to store pictures and videos on smartphones. The market structure in the flash memory market and the production partnerships between Toshiba and Western Digital Corp. (13% market share) in this business created interesting deal dynamics. The concentration of the market and its reliance on flash memory for the iPhone made Apple a party with strategic interest in this transaction, fearing further consolidation of the market. Apple tries to avoid dependency from Samsung and secure supply of the strategically important memory chips. As Western Digital teamed up with KKR, trying to purchase the business and consolidate the market, Apple decided to back a different group led by Bain and agreed to add $3bn in equity investment alongside financing from Dell, SK Hynix, Kingston Technology Corporation and Seagate Technology, who are part of the Bain consortium. The rationale clearly was to avoid further concentration of the flash memory market, which is a vital input for Apple. Western Digital initiated legal action against the deal, arguing that due to the numerous partnerships it has with Toshiba in the memory chip business it should have veto rights in any sale of the business. The uncertainty generated by Western Digital’s move led to the drop out of a number of potential investors in the deal, including Innovation Network Corp. of Japan and the Development Bank of Japan. Bain committed to go on with the deal despite the legal issues and Apple filled the void left by the investors who dropped out.
In order to avoid delisting, Toshiba needs to close the deal by the end of March 2018. Until then, numerous issues could still jeopardize the effort to sell. The legal action from Western Digital still has not been resolved. According to media reports, KKR is attempting to persuade Apple to switch sides and back their offer. With this number of parties in the deal and the different interests, the sale remains extremely interesting until closing.
Mathias Hoerl