The Trans-Pacific partnership is among Obama administration’s last accomplishments. This trade deal among 16 countries in the Pacific area has the purpose to create a single free trade area that would involve 40% of world’s GDP and 1/3 of global trade but some countries still have to ratify it. 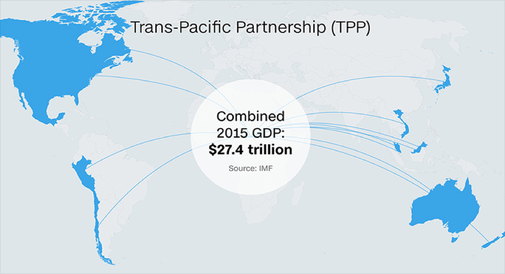 However, as the result of the US elections came out, fear started among the participants. Both the candidates were in fact promising a change of the agreement making Obama’s effort to increase American influence over the Pacific Rim useless.
Hillary Clinton on her side wanted to create a new TPP under a new name while Donald Trump criticized the deal and made the fight against it a crucial part of his campaign. He believes that free trade and globalization are the main reason for job loss in the US and that it is also reducing demand for American products. He therefore declared that he would prevent the deal from being approved by the congress.

With Trump winning the elections, the worst scenario came true, TPP participants started concerning about the future and have now split. Some of them still support the agreement, some would prefer not signing any and some others will be available to set plans for a new deal. Until the elections, China was not part of the game as the TPP had as an implicit aim that of creating a “everyone except China club” as the major concern of all the countries was the increasing economic importance of Beijing and the fear of its influence over the Pacific.

However now that plans have changed, with America possibly backing out of the agreement, the role of the leader has to be filled. This represented a great opportunity for China’s President Xi Jinping who had a star role during the last APEC meeting in Lima. He in fact introduced to Pacific Rim countries their “TPP”: the RCEP.

The Regional Comprehensive Economic Partnership is a new agreement that would include 10 countries and would cover 1/4 of world’s trade. This proposal was perfectly timed as China approached countries right when the first countries started having doubts about TPP. Beijing did not like TPP at all: first of all because they were not included and second of all because it represented a thread for them because the US would have set the rules and would have become the unopposed leader of the Pacific Rim.

Chinese RCEP has already received good comments from countries like New Zealand that, as their Prime Minister Malcolm Turnbull stated, would be willing to open their doors to China if the TPP does not materialize even though they like and prefer American leadership, but if they back out the void must be filled and China represents the only alternative.

On the other hand, Japan and India do not like the possibility of Chinese dominance in the APAC region, but, as they are not able to take the responsibility of filling the gap left by the US, they will soon have to decide whether a Chinese agreement will be feasible.

In the US the stepping in of China was not welcomed at all. While many experts believe that Trump’s move will destroy American leadership, others believe that American leadership will be untouched but will for sure suffer. Unfortunately, as Trump’s first moves are showing, the TPP will most likely fail, China will then be able to create its own trade agreement making it the most influential and powerful nation in the Pacific area and therefore threatening the leadership of the US.

What the US could do now about that is to try to come up with a new agreement that could please Mr. Trump and the Congress, preventing the Chinese thread from materializing and regaining influence over the Pacific Rim. Moreover, Trump’s campaign has worsened relationship with China as the newly elected president is accusing the Asian country of stealing jobs. His plan will be therefore that of increase up to 45% the import taxes for Chinese products. This powerful weapon will for sure harm the Chinese economy as its main “costumer” are the US. China should think twice before going ahead with its plan.