Turkey crisis finds its roots in the 2001 IMF bailout which spurred 15 years of economic growth, an expansion mainly due to foreign capital inflows, access to cheap credit, and a global economic recovery. However, in 2018 it all crashed when rising inflation, an overextended banking system, and a government-dependent central bank caused an unprecedented crisis. From then on, Turkey has experienced a weaker currency and high inflation while interest rate has not been raised significantly. The first signs of recovery appeared after the appointment of Mr. Agbal as central bank governor in November 2020.

In the first three months of 2021, Turkey signaled a remarkably positive economic outlook. It was expected to be one of the top emerging markets of the year thanks to a larger flow of capital from abroad, an expected decrease in inflation, and a stronger Turkish Lira. However, on March 20th President Receip Erdogan sacked Naci Agbal, the third to be fired in under two years.
The removal of Mr. Agbal took place less than two days after a further 2% increase in interest rates, aimed at keeping up with the rise in yields of US government bonds, a soar that was not welcomed by President Erdogan, who perceives interest rate as the “mother and father of all evil”.

According to Yerlan Syzdykov, global head of emerging markets at Amundi (Europe’s largest asset manager), this choice came at a moment when “Turkey was rebuilding its credibility”. The former head of the central bank managed to rebuild the confidence of international investors, fostering the inflow of capital from abroad. Agbal's policies lifted the Lira by 18% since November and raised rates to 19%, a first step aimed at taming inflation which currently sits at around 15% per year. In the same period, more than $20 bn entered the nation to profit from the high-interest rates either through currency swaps or government bonds and equity. 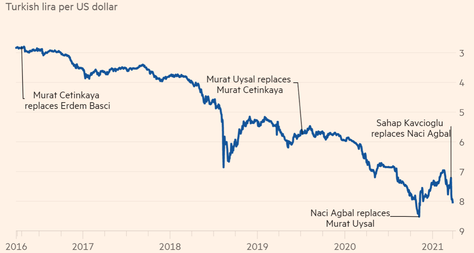 Source: Financial Times
In the week following the firing of the former governor, the Lira lost 11% and the Borsa Istanbul 100 stock index was down 9.6%. The news dramatically hit both currency and bond market: 10-year bonds lost 20% in five days while $6.5bn invested into currency swaps left the country in just two days. Moreover, Ankara seems to be imposing some form of capital controls. Indeed, in order to exit swap contracts, investors need to borrow Lira, but Turkish banks charge an annualized 1,400% for Lira loans. In addition, supply is limited as lending to foreign investors is restricted by regulations.

These negative trends are also due to the appointment of a rather unusual governor: Sahap Kavcioglu, a trusted and loyal member of Erdogan’s Justice and Development Party. Kavcioglu has stated in the past that high-interest rates cause inflation and decreasing exchange rates, a view also shared by president Erdogan but in contrast with most economists. Moreover, he has previously reported that to stop the fall of the Lira it is possible to employ foreign currency reserves, of which the central bank has already spent almost $100bn. However, since taking office, Mr. Kavcioglu stated that he will not immediately decrease interest rates while aiming to achieve a 5% inflation rate. The central bank has not released any further comment and is scheduled to meet with international banks and creditors in the upcoming weeks.

The path towards economic recovery just got narrower as investors are pulling funds out of the country and the Lira continues to plunge. The new governor will have to fight domestic inflation while keeping up with an increasingly strong dollar. Maintaining the current interest rate may tame an increase in inflation, but it might be too late to avoid a full-scale currency crisis.