​​Uber in talks to acquire Deliveroo

Hungry for investments
Deliveroo is one of Europe's biggest startup success stories: Founded in 2013 by Americans Will Shu and Greg Orlowski, Deliveroo enlists contract employees as couriers, who deliver food from local restaurants in some 200 cities all over the UK, the European Union, Asia, and Australia.
Although little-known in the crowded U.S. market, which it has avoided, Deliveroo is ubiquitous in Europe’s capitals. 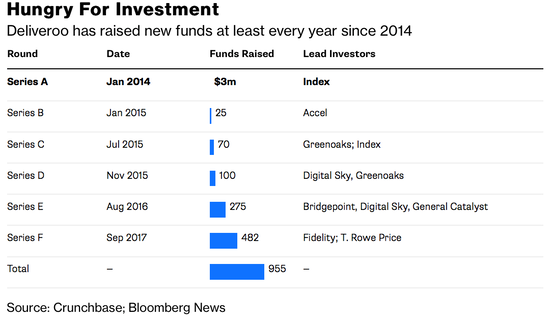 Last year, Deliveroo raised $482 million in venture funding, in a deal valuing the company at around $2 billion.
Moreover, Sky News reported on November 24th that the firm is in the preliminary stages of discussions with prospective and current shareholders about a new funding round. The fundraising may be pitched at a valuation within $3bn and $4bn; with the British start-up likely to seek between $350m and $500m (£390m) of new capital. Probably the talks will last for several months, and insiders suggested that there was no urgency about raising the money, with Deliveroo sitting on a cash pile of hundreds of millions of dollars.

A possible acquisition
Why is Deliveroo trying to raise so much cash? The reason why the firm is seeking a new funding round may not be because it needs cash. Instead, it is supposedly an effort to strengthen its hand for prospective negotiations with Uber by increasing its valuation.

As a matter of fact, Uber is targeting the UK’s food delivery market with plans to link up with Deliveroo. Dara Khosrowshahi, Uber’s chief executive, has focused expansion plans on UberEats, its food delivery division, which is growing at 200 per cent a year and is on track to report $6bn of revenues this year. The ride hailing app is keen to buy or invest in Deliveroo since it would offer Uber the chance to expand its European business rapidly and further penetrate the market.

In fact, competition in the food delivery market has intensified in Europe: in the UK, where Deliveroo has operated since 2013 and UberEats launched in 2016, Deliveroo delivers from a network of 10,000 restaurants, while UberEats has 7,000. By comparison, Just Eat has a network of 30,000 (see chart below). 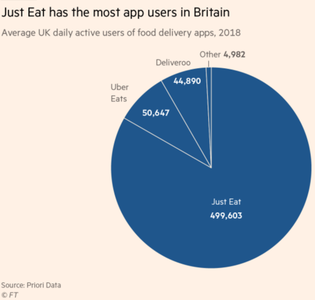 A combined company would close the gap with bigger British rival Just Eat and eliminate a competitor in a market where consumers can switch between services easily. This would simplify the competitive landscape between Just Eat and Uber Eats, creating a “two-horse race” in the food delivery sector. However, it is not straightforward at it seems.

Difficult talks
In September Uber had held early-stage talks to acquire Deliveroo, proposing an offer for the company valuing it at less than $2bn, while Deliveroo has pegged its value at $4bn, according to the Financial Times. This significant gap on valuation between them explains Uber’s hesitation.

Actually, by looking into multiples we can give a justification to this hesitation: even if revenue at Deliveroo’s parent company, Roofoods, more than doubled to $354m, in 2017 losses grew too — up more than 40% to $226m. At $4bn, the lossmaking company would be priced at more than 11 times revenue. Listed US rival GrubHub is priced at 10 times. Just Eat, which connects diners and restaurants but does not provide drivers, at just 7. The $4bn valuation may be unjustified on this ground.

As we already pointed out, capturing more of the UK and European food delivery market would contribute to Uber’s expansion plans ahead of next year’s initial public offering. But buying Deliveroo might not be the best way to go about it.
The Competition and Markets Authority estimates that UberEats has less than a tenth of the UK market. Buying Deliveroo would increase its share, but there are significant overlaps. Uber Eats and Deliveroo, which both provide their own drivers, operate in large cities and already share customers and restaurants.
Any acquisition of Deliveroo by Uber may also be complicated by competition concerns. The UK’s competition watchdog previously investigated Just Eat’s £200m purchase of Hungryhouse, the UK arm of Delivery Hero. That deal was cleared in 2017, with the Competition and Markets Authority noting that the strong growth of Deliveroo, which was on course to have 10-20 per cent of the market by the end of 2017, ensured there would not be any substantial lessening of competition.

Competition is edging out rivals: Amazon has recently closed its two-year-old London based restaurant delivery service. The research company NPD Group estimates that the food delivery market will be worth $5bn by early 2020. But instead of fighting for market share the companies should try to increase the size of the market. Uber Eats may be better off building than buying.