Tesco (LSE: TSCO), the leading supermarket chain in the UK and Ireland, announced on March 9, 2020 that it has agreed to sell its Malaysian and Thai business for $10.6 billion in cash to Thai conglomerate CP Group. CP Group operates thousands of 7-Eleven stores in Thailand and the Siam Makro cash-and carry wholesale chain. This deal represents the largest acquisition in Asia in the year to date and is the biggest in Thailand’s history.
According to Bloomberg, Tesco is the largest hypermarket chain in Thailand, operating a total of 1,960 stores, with 74 stores in Malaysia. This sale marks the end of Tesco’s 22-year presence in Asia after having sold its China joint venture in late February.

Deal Rationale: simplification, significant return to shareholders, and de-risking
Following the sale, the supermarket chain says it will be a “significantly more focused business” with the market leading position in the UK and Ireland with over 3,800 stores in multiple formats including convenience and grocery stores, in addition to its wholesale business, Booker. Furthermore, Tesco has an established presence in several Central European countries, with nearly 900 stores in Poland, Hungary, Czech Republic, and Slovakia combined.
In a stock exchange statement, Tesco said that it would use proceeds from the sale to return over £5 billion to shareholders through a special dividend. The group also stated that the deal will further “de-risk” the business by reducing indebtedness through a £2.5 billion pension contribution to eliminate the current funding deficit and reduce the prospect of having to make pension deficit contributions in the future.
CP Group is buying Tesco’s Malay and Thai assets through its CP Foods and CP All businesses. “We believe the reason management has broken down the investment into small pieces is that it does not have to pass a shareholder vote and to minimise capital-raising risk as much as possible,” Citi analysts stated in a report.

The Thai conglomerate owns and operates over 12,000 7-Eleven stores through CP All and about 80 wholesale stores under Siam Makro. Further expanding its retail footprint, CP Group will gain control of 1,960 Tesco Thailand stores, many of which the British retailer bought from CP Group during the 1997 Asian financial crisis. This includes 1,600 convenience stores, 200 hypermarkets, and 74 outlets in Malaysia.
​
Complete Asia exit would benefit core markets
Narrowing its focus on its European operations stands to benefit Tesco. In the 2018-2019 fiscal year, the company saw its operating income from the UK and Ireland increase by 45%, while its Central European operating profit grew by 56%. In stark contrast, operating profit from its Asian operations fell 4.3%. 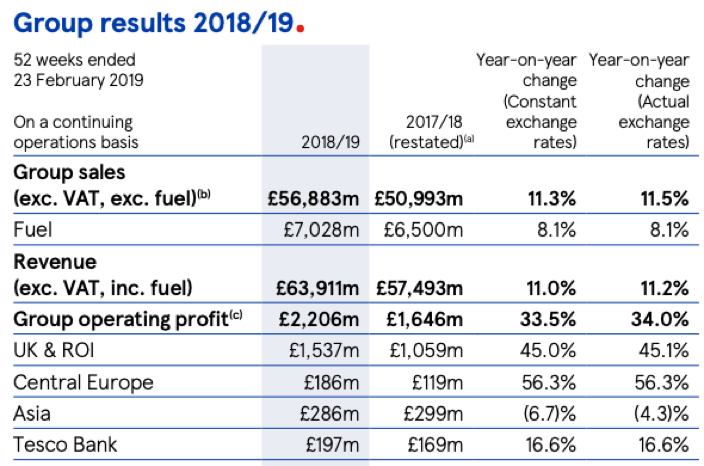 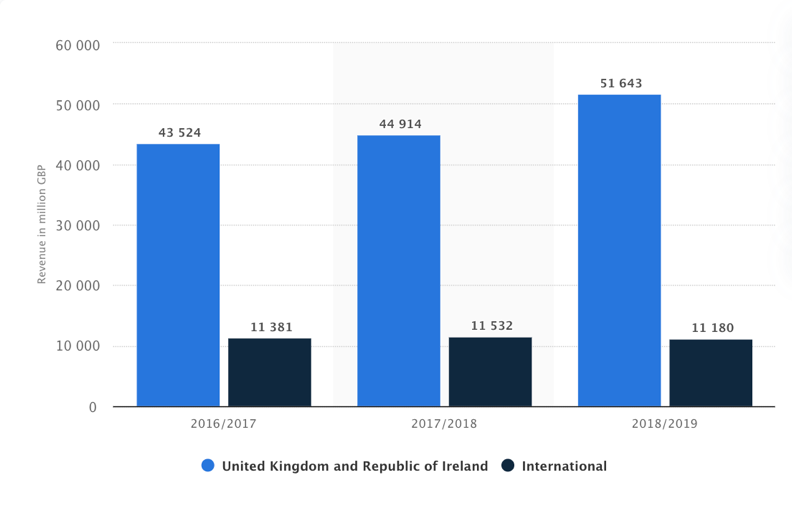 Source: Statista
​Tesco knows its home and Central European markets well. The company is well aware of the challenging retail environment within these countries and how to overcome them. In 2019, European operations made up 90% of sales, up from 87% in 2018.
​Tesco Sales Breakdown by Geography (%) 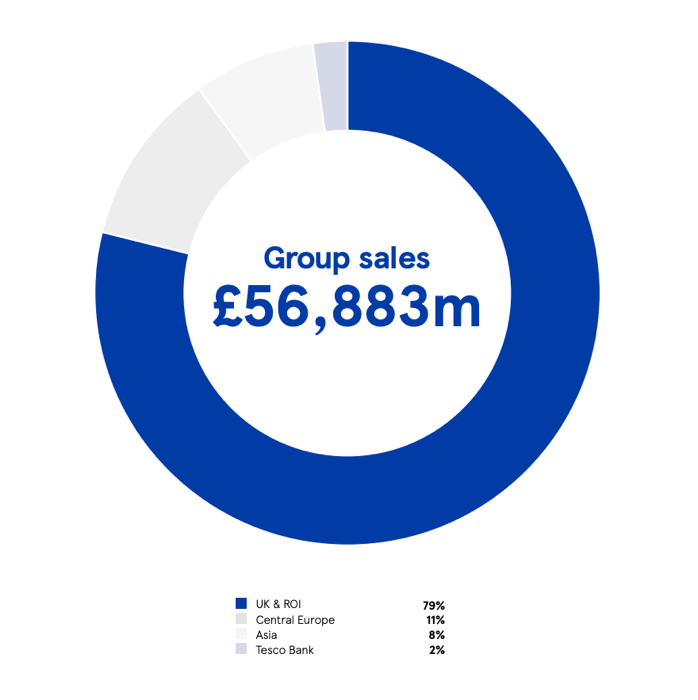 Source: Tesco Annual Report (2019)
​
The company began divesting from Asia after an accounting scandal in 2014 and a slowdown in its UK home market led to declining profits and the reduction of its credit rating to junk. Tesco said selling its Thai and Malaysian businesses came from a position of improved performance in the UK and its restoration of dividend payments after the accounting scandal.

The sale comes shortly after Tesco completed its exit from China in late February with the $357 million sale of its 20% joint venture stake to state-run partner China Resources Holdings (CRH). Having struggled to succeed in the Chinese market, Tesco established a joint venture with CRH in 2014.

Furthermore, Tesco has previously sold its Japanese and South Korean operations. The company has stated that its retreat from Asia will allow it to focus on its core markets. Disposing of its Asian business will free up cash for further expansion in Europe. It will also enable Tesco to exit a market that it has historically been unsure of how to successfully penetrate due to steep competition from local players.


Jules Ong
Want to keep up with our most recent articles? Subscribe to our weekly newsletter here.