Understanding MasterCard’s €570m fine by the EU for restricting competition

MasterCard has joined an increasingly long list of big US companies facing fines by the European Commission, ranging from State aid cases involving Apple, Amazon and Starbucks to antitrust cases faced by Google and Qualcom. In this article we will go through what happened and we will try to understand the rationale behind EU Commission’s decision by giving a brief description of how the credit cards’ business works.

An analysis of the events

On January the 22nd in breach of EU antitrust rules, the European Commission has fined the card scheme MasterCard €570 for limiting the possibility for merchants to benefit from better conditions offered by banks established elsewhere in the Single Market.
Quoting the words of Margrethe Vestager, in charge of competition policy: “European consumers use payment cards every day, when they buy food or clothes or make purchases online. By preventing merchants from shopping around for better conditions offered by banks in other Member States, MasterCard's rules artificially raised the costs of card payments, harming consumers and retailers in the EU.”

MasterCard is the second largest card scheme in the European Economic Area in terms of consumer card issuing and value of transactions. Under the MasterCard scheme, banks offer card payments-related services under common card brands, MasterCard and Maestro. The company acts as a platform through which issuing banks provide cardholders with payment cards, ensure the completion of the card payment transaction and transfer funds to the retailer's bank.

Figure 1 illustrates how any credit card transaction works. In brief, when a consumer uses a debit or credit card in a shop or online (1), the bank of the merchant (the “acquiring bank”)
(2-3) pays a fee called “interchange fee” to the cardholder's bank (the “issuing bank”) (5). Interchange fees are set by the network scheme (MasterCard in our case) according to some rules (4), decided by the scheme itself, in compliance with regulations. Then the acquiring bank passes this fee on to the retailer who includes it, like any other cost, in the final prices for all consumers. 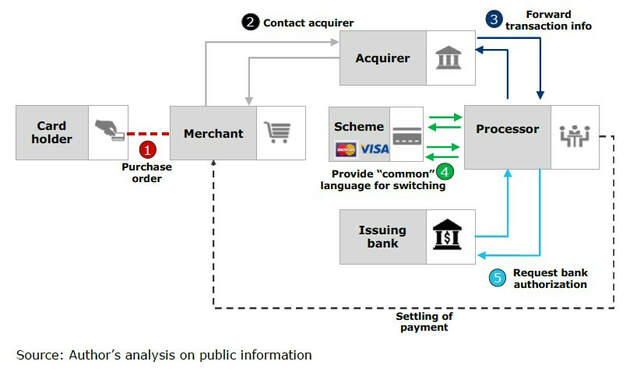 As we can see card networks play a central role in credit cards’ business model. In fact, networks providers set the rules all industry participants have to stand to and operate as a link between the issuing and acquiring ecosystems, connecting and switching transactions between them, enabling electronic payment authorization, clearing and settlement.
The market of card networks is a very concentrated market since players exploit economies of scale by processing trillions of transactions, thus it is fairly easy for a network to exploit its dominant position in the market, by setting unfair rules and fees for banks. As a matter of fact the Commission’s fine is based on the fact that MasterCard's rules obliged acquiring banks to apply the interchange fees of the country where the retailer was located.

This was considered unfair by the Commission since before December 2015, when the Interchange Fee Regulation introduced caps (fees of max 0.2% of the transaction's value for debit cards and 0.3% of the transaction's value for credit cards), interchange fees varied considerably from one country to another in the EEA. As a result, retailers in high-interchange fee countries could not benefit from lower interchange fees offered by an acquiring bank located in another Member State, because of MasterCard’s rules.
The formal antitrust investigation against the company was opened by the Commission in April 2013, in order to assess whether these rules on 'cross-border acquiring' were in breach of EU antitrust rules.
The Commission investigation found that because of MasterCard’s cross-border acquiring rules retailers paid more in bank services to receive card payments than if they had been free to shop around for lower-priced services. This led to higher prices for retailers and consumers, to limited cross-border competition and to an artificial segmentation of the Single Market (Figure 2 illustrates these concepts). 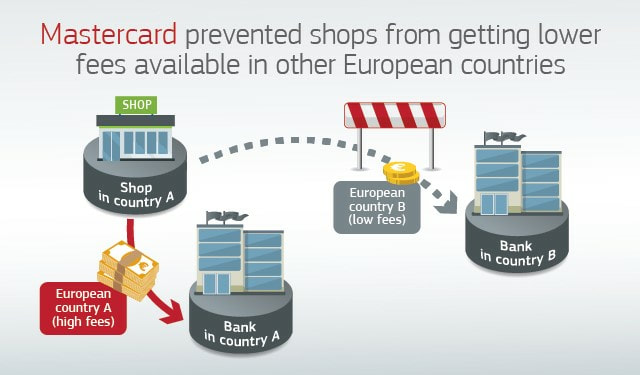 Since MasterCard cooperated with the Commission by acknowledging the facts and the infringements of EU competition rules, the Commission granted a 10% fine reduction in return.

Moreover, hoping to boost investor confidence, MasterCard also raised its dividends by 14% to 25 cents from 22 cents a share and its board also approved a $4 billion stock buyback at that time. Nevertheless, shares were lower Tuesday 22nd of January after the company announced it was fined (-1.26%, to close at $199.46).