​Recording a 2018 GDP of ¥2.42 trillion (approximately $366 billion), Shenzhen reaffirmed its position as the 3rd largest Chinese city by gross domestic product, behind Shanghai and Beijing. The city – which only four decades ago was a modest fishing village – rose to international significance after 1980, year in which it was designated as China’s first “special economic zone”. The favourable investment environment then prompted foreign corporations to establish their manufacturing plants in Shenzhen, which was dubbed the “world’s factory”.
Shenzhen is able to attract such a large number of entrepreneurs thanks to a unique ecosystem promoting the development of start-ups in the tech hardware space. A vital role in this ecosystem is played by accelerators, which assist the new-born companies in transforming their ideas into business. Accelerators provide support to the start-ups in a wide array of matters, ranging from product development to production management, and facilitate their growth by connecting them with deep-pocketed investors such as global companies and venture capital firms. Venture capital investors are particularly attracted to Shenzhen due to the abundance of high-potential firms and the exit opportunity presented by the ChiNext board of the Shenzhen Stock Exchange – a board with relatively loose listing rules, specifically designed for high-growth firms.

​Another crucial element for Shenzhen’s ecosystem is the presence of a complete supply chain within the city. The proximity to suppliers and manufacturers benefits hardware start-ups in two major ways. Firstly, it slashes the time needed for a prototype to turn from a drawing to a physical object. By allowing firms to rapidly identify areas for improvement, this boosts product development. Indeed, the accessibility of factories is one of the reasons why – in the words of Jo-An Ho, business development director at HAX, one of the most prominent accelerators in Shenzhen – “One week of R&D in Shenzhen, takes one month in the rest of the world”. Secondly, by working closely with factories during the prototyping phase, start-ups are able to minimize the complications arising during manufacturing. This reduces production costs, which normally account for the majority of development costs of a product. Moreover, because Shenzhen’s supply chain has been developing since the early 1980s, it is both unique to the city and nearly impossible to replicate.
The third and last element of Shenzhen’s ecosystem is the support which the municipal government provides to start-ups. Through a number of initiatives, such as offering subsidies of up to ¥5 million ($742,400) to entrepreneurs and research institutes, the municipal government is in fact aiming to attract new businesses to the city. Especially targeted by these initiatives are so-called “sea turtles”: Chinese nationals educated overseas. Sea turtles are proving a driving force in the development of Shenzhen’s start-up scene, and the efforts of the municipal government have succeeded in attracting tens of thousands of them. 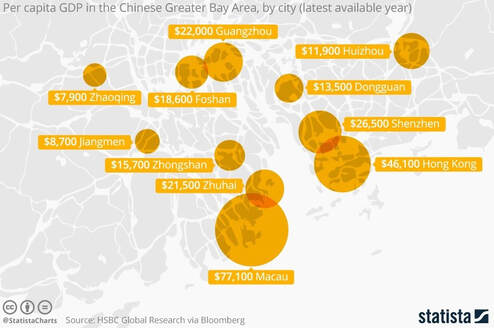 ​The growth of Shenzhen’s economy is expected to progress as, among other reasons, the city is poised to benefit from China’s “Greater Bay Area” initiative. The initiative, the details of which were revealed earlier this year, is a plan to integrate the special administrative regions of Hong Kong and Macau with nine cities located in the nearby Pearl River delta including Shenzhen and Guangzhou, a megalopolis known for its manufacturing industry. With the abolishment of trade barriers, businesses in the region would be able to leverage the strengths and expertise of each metropolis, achieving an edge over their competitors.  While the Greater Bay Area plan is highly promising, it presents a number of challenges – the most problematic being the integration of Hong Kong and Macau, which currently enjoy a different set of laws than mainland China and might see their current freedoms and competitive advantages disappear as the mainland’s legal framework is applied to them instead.