US Inflation: Trade or Trend

People who have not approached the world of economics before this decade would find it hard to believe their own eyes if one morning they woke up reading on the newspaper about actual rises in the consumer prices. Inflation has become in the recent years what ironically has been defined “the dog that didn’t bark”. Major central banks around the world have fully committed themselves to do whatever it takes to keep at bay the phantom of deflation and by doing so shifting expectations about the future, but up to now the debate is still open on whether the rise in price is materializing or not.
Iain Stealey, fixed income portfolio manager for JPMorgan Asset Management, says: “I like to think of it as the great hunt for inflation, and they can’t find it at the moment.’’

Nevertheless, many investors keep on betting on the Consumer Price Index as proven by the pouring of funds towards the TIPS (Treasury Inflation Protected Securities). In recent times, however, the investors’ shift in expectations about future inflation is not only driven by banks’ policies, but in particular by two other intertwined sources: one is the rebound in oil prices and the other is the depreciation of the dollar implying obviously a rise of price of imported goods in domestic currency.

Looking from a quantitative perspective, the change in expectations becomes evident when the five-year “break-even” rate, which is derived by comparing the yield on Tips and conventional Treasuries, climbs of almost 53% since the beginning of February.
The doubt arises spontaneously: is really the end of a cycle characterized by dollar strength and commodity weakness marking a new trend from the post-crisis status quo or is it just a short-lived tactical bet?

Apart from those exploiting these opportunities enjoying the ride as Mr. Worah Pimco’s chief investment officer admits, most of the economists anchored to the traditional signals of inflation, disregard the possibility of this trend being sustainable since they cannot see improvements in the real economy neither upward pressure on wages. 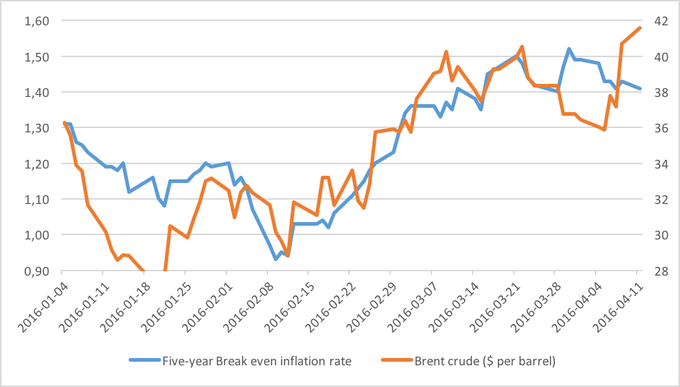 ​Only time will tell about the outcome, but in the meanwhile it is worth noting how since the beginning of 2016 the break-even rate and the price of oil moved closely. Such an information sounds surely great to the ears of investors looking for hedging possibilities. A statistical analysis on the basis of a relative small sample of data since the turn of 2016 leads to the following conclusions: more than 20% of 5 year breakeven rate’s volatility can be addressed to changes in Oil prices with almost insignificant 3% standard error. Moreover, it can be added that for a 1% change in Oil prices, inflation expectations shift by 0.38%.